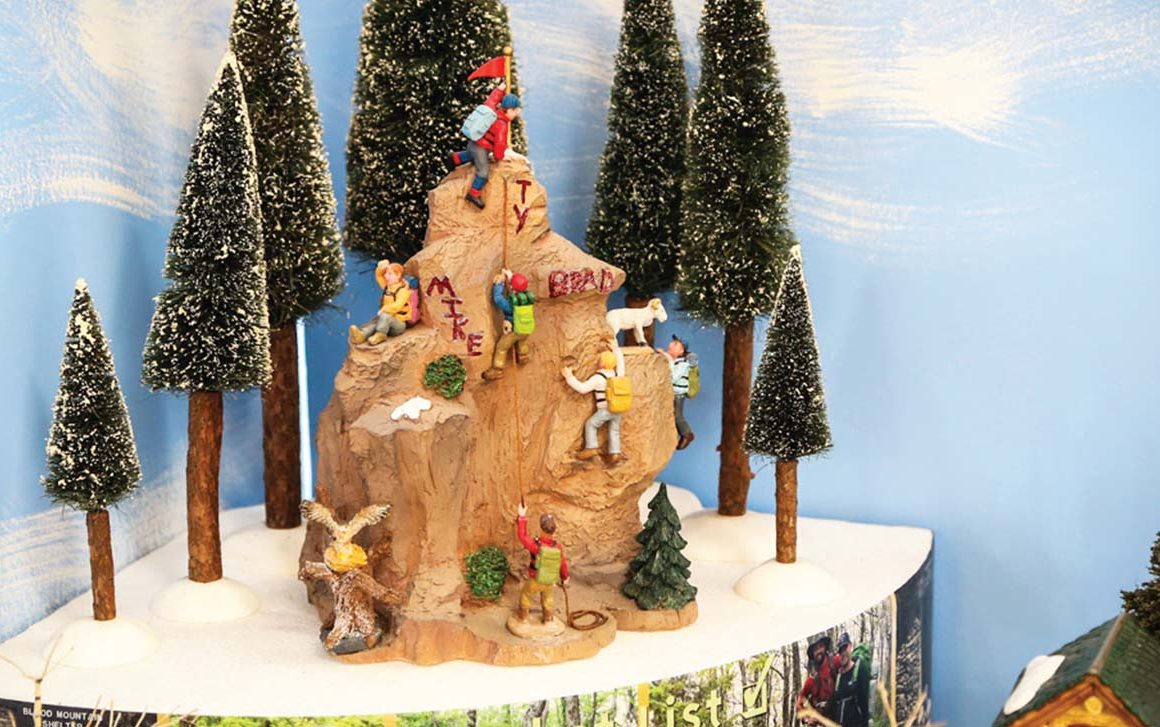 It’s only mid-October, but Bruce Harting already sits at a table at 3 Daughters Brewing fixing a Department 56 Tinkertown Toy Factory. Starting in mid-November, he’ll be ready to display the factory and over 300 other collectibles from Department 56. The Christmas Village spans the length of the popular craft brewery’s tasting room and sits on eight 4-by-8 tables. There are people, stores, houses, trees, a circus, the North Pole, three trains, ballerinas dancing the Nutcracker, Santa with his reindeer, and even a tiny replica of 3 Daughters Brewery. 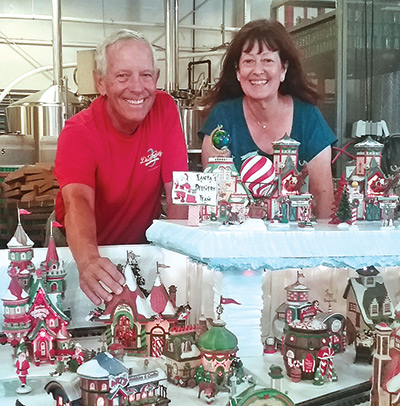 When people see the display the first time, Bruce – a Shore Acres resident and father of 3 Daughters Brewing owner Mike Harting – says the reactions are “amazed” and “enjoyment.” Asked who is more excited, the kids or the adults, Bruce doesn’t hesitate when responding: the adults. Since the brewery is a family-friendly environment, kids are as welcome to visit as adults to see the display, which stays up through early January.

Bruce’s daughter-in-law, Leigh, points out that Bruce has handcrafted many of the pieces, like the figurines of people hiking up a mountain. She says that every year Mike, 3 Daughters head brewer Ty Weaver, and logistics manager Brad Rice and his wife hike a portion of the Appalachian Trail. Bruce made the figurines to recognize their accomplishment.

Setting the display up is “a family thing,” and Bruce says that all of his grandkids help out.

His wife Pat is in charge of organizing the Christmas Village people – all 442 of them. After dusting each one off, she arranges them in the village. If children are in the brewery while she’s working, she lets them place a piece wherever they want. One year, a little girl wanted to put a figure on top of the motor that controls the tiny parachutists. That is exactly where the figure went and stayed.

The tradition of the display has family ties, too. The collection began in 1986. That year, Bruce’s mother gave the family their first Department 56 piece. Every year since then, the collection has grown. At first, it was placed around the Harting family’s Christmas tree, then when it got too big, it went on display in the garage. When Bruce’s son, Mike, opened 3 Daughters with Ty Weaver five years ago, the Christmas Village came to the brewery.

Initially, the Hartings only received Department 56 pieces annually, as Christmas presents. But as people learned about the display, they started donating items as well. “We maybe only add five pieces per year at this point,” Bruce explains. Bruce says the display makes people reminisce, especially the first time they see it. “It just brings back good memories.” On top of the memories, he adds, “it’s just fun.” 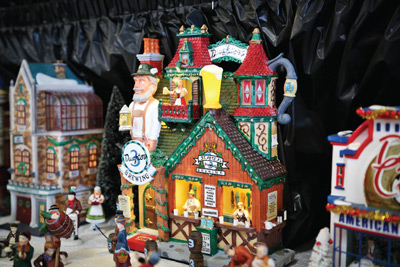 When the season is over, the Christmas Village is stored at the brewery, and from January to November it is kept carefully wrapped in plastic among the kegs and cans in the back of brewery. When the display is taken down in January, pieces that need to be fixed are added to a list and marked with a piece of blue tape. Over the summer, they fix the broken items, ensure the lights work, and check all 88 mechanized pieces. On top of this routine maintenance, every year three tables are gutted, redesigned, and rebuilt.