A Bon Vivant and His Muse 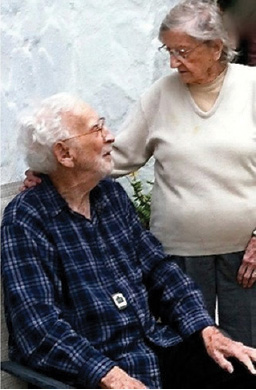 Richard Montague and his late wife Maude, together for 74 years

One can’t help being charmed by Richard Montague. He defines the term “bon vivant.” And he is clear about his approach to life over nearly a century: “When life presents an opportunity, take advantage of it.”

His life story bears that out. As a young man with a scholarship at stake, he entered a piano competition in high school and won a full ride to Syracuse University. Next, inspired by a Teddy Roosevelt speech, “The Strenuous Life,” he went west to teach at Southern Idaho College of Education in Albion. While there and leading its tiny music department, he broke horses, learned to rope, and performed in rodeos as “The Professor.”

But, there was never an opportunity like the one presented to him at the Syracuse library. Maude Nickols had just returned from a student teaching appointment and didn’t know the next class assignment. She approached Richard because she noticed he had the book from the class. Could he please tell her what that assignment was? By all indications that was all she wanted. But immediately he wanted much more.

“I thought she was the most beautiful girl in the world,” Richard said. “I wasn’t about to let her get away.”

It was the spring of 1940, well past Valentine’s Day, but Cupid had apparently scored a double bull’s eye, because she once said it was love at first sight for her, too, though it was almost too late. They both were to graduate in two weeks. Richard felt he had to move fast. 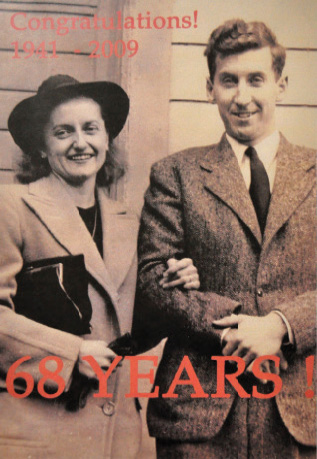 He asked her for a date, but she had another that evening. He played his advantages. He had a car, so he suggested a ride the same afternoon and concocted his plan. “I had to figure a way to get that guy out of the picture, so while on the drive I pretended to get lost. By the time we got back, that Colgate student had tired of waiting on her,” and returned to his campus, never, apparently, to be seen again. Richard then took Maude out for the evening.

Their love affair began that day, but Richard had made the most unforgivable error: he forgot his new-found love’s first name. “Maybe it was because I didn’t really like the name Maude,” he said. “All I could remember was that her last name had something to do with money.” So Maude Nickols forever became “Penny,” at least to him. She seemed to appreciate the affectionate name, but according to their son John, an artist in Buffalo, New York, she introduced herself to others as Maude.
With graduation looming, their romance carried a certain urgency. They both were offered teaching jobs, but hers was in Lake George, New York, and his was in Greenwood, 300 miles away near the Pennsylvania border.

They could only see each other on weekends. She would take the train to Syracuse, where he would pick her up after driving 130 miles from Greenwood. They would then drive the 40 miles to Oswego on the shores of Lake Ontario where Richard’s parents lived.

“But we would write to each other every day,” Richard said, “until she said we were spending too much money on those 3-cent stamps.

“She would remember all the details of those days. I wish she was here to tell you.”

But she isn’t. Maude passed away this past spring at age 98.

While Richard grasped life’s opportunities and loves to tell stories of his escapades (though keep in mind that often Maude was right there with him), he will admit, and their children will confirm, that life in the Montague house was tempered and enriched by Maude’s devotion to family. And her story is much different than his.

Richard was a lucky child. He always had a few dollars in his pocket, earned by playing in dance bands. His father, an inventor and design engineer with the Diamond Match company, never lost his job during the Depression.

Maude had a much tougher childhood. Her parents scratched out a living on a farm in Fabius, New York. Her mother died when Maude was just 6 years old. Her dad passed away when she was 10. She was the youngest of five children, and at first it fell to her 16-year-old sister Blanche to care for her siblings in the “Lee House” the community provided for them. But, soon each child was sent to live with other families. Maude’s foster parents were successful farmers. Though by all indications they were caring, they were strict. Dancing and music were sinful. She was not allowed to so much as cross her legs in public. They said she didn’t need an education. They raised her to be a farmer’s wife.
She had a different plan. “She had to be a college woman,” said their son John. “And she had to marry a college man to get away from the farm.”

Maude borrowed money to go to a two-year business school, then worked another couple of years to pay for her education degree at Syracuse, though she still had to borrow heavily from her church and her foster parents. They were willing to give her the money if she felt that strongly about an education, according to John, but she insisted on paying them back. So she knew the value of 3 cents. 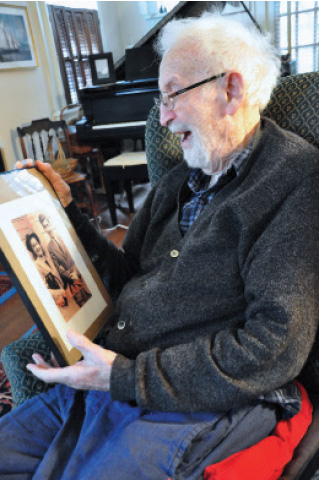 Richard Montague reflects on the love of his life, his wife Maude, affectionately known as Penny

Richard and Maude married in 1941. She made her dress, as her first job before college was as a dress designer. In addition to Idaho, they lived in Ypsilanti, Michigan – at a boy scout camp with neither heat nor running water – while he worked on his master’s degree at Michigan State. They also lived in New Mexico, West Virginia, and eventually Tallahassee, where he earned his doctorate at Florida State – at her quiet insistence.

“His conflict was that he was a concert pianist who wanted to be a cowboy,” said John, “but she made sure he got his degree.”

Her children say that Maude provided the family’s firm foundation – and the ballast to Richard’s adventures. “She was quiet, even reserved,” said their daughter Cindy Montague, a landscape architect in Charleston, South Carolina. “But she ran the show from behind the scenes.”

Maude kept the family books. Richard insisted on having his summer’s free for explorations, such as a 14-week horseback trip through the Rocky Mountains with his sons, or an 11,000-mile circumnavigation of the U.S. in the car with Cindy and Maude. After he retired, he and Maude travelled Europe extensively.

“Whenever he had an idea, he’d say to Mother, ‘Can you jiggle the books to make this happen?’” said their oldest son Steve, a classical music composer living in London.

Richard was always ready for something new. Maude was cautious. But she gave her children the room to explore.

“She was so supportive,” said Cindy. “I could do no wrong and I could tell her anything. She rarely scolded me. I got my confidence in life from her. She was my best friend.”

In fact, Maude rarely scolded or criticized anyone. That was one thing Richard loved about her from the beginning. “She was so kind and nice to everyone,” he said… to him especially, and he was devoted to her. “I never heard my parents have a fight or raise their voices,” Steve said.
“I grew up thinking that was the way all families were,” said Cindy.

“If we disagreed about something,” Richard said, “and she could see that I was getting upset, she’d say, ‘Let’s talk about this tomorrow.’”

After 74 years together, there is of course a little sadness when he talks of his Penny. A few months ago he could hardly say her name without shedding some tears. But today, her memory evokes more smiles and laughter, perhaps because they didn’t miss opportunities to revel in their relationship. One time after Richard retired 45 years ago and they had bought their house on the corner of 15th Avenue and Poplar St. in Old Northeast, Steve found them dancing in the kitchen.

In later years, they would read their old love letters to each other. “I had quoted Shakespeare and written poetry,” Richard said. “Reading them again, I fell in love with me!”

Earlier this year, after Maude spent time in the hospital, Richard said they knew they had little time left together, so they would lie in bed together holding each other.

“We’d be as nice to each other as we were when we were dating. We’d love each other as much as we could. All through the day, we would give each other little kisses and hugs or hold hands, like teenagers. We wanted to end life just as we started out.”

“I miss her.” His voice trails off. He smiles.

Robert Griendling is a writer living in the Old Northeast neighborhood with his wife Karla. He also writes a bicycling column for the Tampa Bay Times.
Share: