A Flock of Our Own 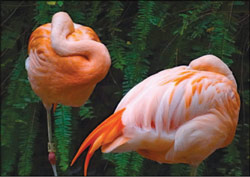 George and Lucy, the two remaining flamingos from the original flock of seventeen at Sunken Gardens

Come to the Sunshine City!” Images on postcards, billboards, and in newspapers of the bathing beauties on St. Petersburg’s beaches circled the United States. Sunshine, happiness, relaxation, and ultimate paradise stung Northerners worse than the snow against their face. The harsh reality that they were shoveling snow – unlike the Southerners who were shoveling sand – could not be avoided. While battling the winter, they began to place themselves in the images they saw. Through the early 1900s, St. Petersburg had a large marketing push to lure tourists to the area. They targeted people living in the north, framing the area with a youthful energetic image. It was seen as the ultimate playground paradise for vacationers and sportsmen. Not to mention, it looks much better than snow.

One piece of paradise planted its roots in 1903. Opening to the public in 1935 as a full time roadside attraction with exotic plants, vibrant birds, and perhaps the help of beauty queens on the advertisements, Sunken Gardens quickly became the city’s most famous roadside tourist attraction. This botanical getaway was another world that people from all over came to experience. 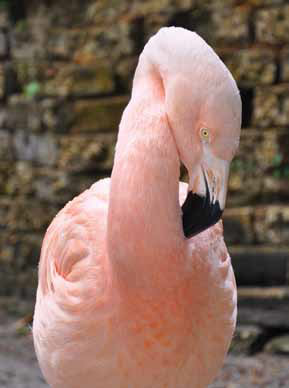 The advertising push ignited a boom in the economy, moving tourism to the leading economic factor. St. Petersburg became a prime destination spot. Visitors instantly fell in love. They loved it so much, they didn’t want to leave. Some bought vacation homes and others decided to call it home permanently.

Generations of families have enjoyed Sunken Gardens. Eric Russo went to the gardens as a child. His grandparents moved to Florida in 1954. The memories of “stepping into another world” with his brother, mother, and grandmother still dance through his head. “All the beautiful feathered birds, which they let you hold… oh and the super pink flamingos standing in a flock,” he said as he jumped from memory to memory. His first memory was when he was five years old. The young boy exploring the garden shines through his eyes as he continues to talk about lemonade slushies and days with his family. Now, 24 year-old Eric is attending law school at Barry University; those moments at Sunken Garden are very dear to him.

The beauty of the garden, the chatter between the birds, and the tranquil state has made an impression on every visitor. This piece of paradise on 4th Street ties an experience between older and younger generations together. Eric’s father enjoyed it growing up, and his son was able to do the same. Despite the abundant variety of flora, there is one portion of the garden that everyone desires to see: an iconic bird… a flamingo. Tourists come to Florida with the desire to see flamingos. 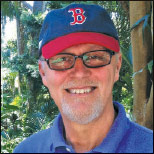 “It’s one of the main draws for tourists. I mean who doesn’t love flamingos? When people come to Florida, they expect to see flamingos and not everybody who comes to Florida wants to go to the theme-park type experience with all of the rides and noise. There are a lot of visitors who come because they want some peace and relaxation… They want to be able to walk through a little garden and just enjoy it. To be able to see a flamboyance of flamingos walking by with all their heads in sync is a really impressive thing to experience,” said Bill O’Grady, Sunken Gardens’ supervisor.

The lasting impression of the flamingos has contributed to the memorable experience. Through the years, the attraction has had its ups and downs; the economic pressure from all-inclusive parks caused the gardens to spiral into a state of decline. The city purchased the property in 1999 and began restoring the historic establishment. 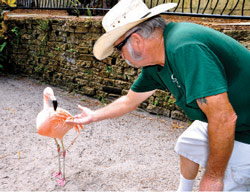 The process wasn’t easy. Tons of overgrown plants and invasive vines had to be removed. It has been an ongoing restoration project restoring Sunken Gardens to the beauty it once was, but this time even better. Pieces of founder George Turner’s family’s green thumb still remain. “We have royal palms, which were planted in 1903; a ponytail palm planted in 1935; and lots of bougainvillea and travelers’ trees planted in the ’40s,” said O’Grady to the Highlands Paper.

As for the flamingos, out of the 17 original flock members that arrived in 1956, only two remain. The flamingos are iconic to basic community, much like they are to Florida. These birds draw people to the area. The thing about flamingos is that they don’t like to be alone. In order to survive, flamingos love to live in a large group, called a flamboyance. Being in a group makes them feel protected and safe. Their movements sync together when they walk. Their coexistence with one another is entrancing to spectators. George and Lucy, the two who still remain, have been named by the community after George, Jr. and Lucy Turner. 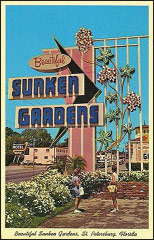 To some this may seem absurd. Why all this push for more birds? How will flamingos keep the history alive? My response: think back to Eric Russo, ask around the community. It may not be something someone mentions right off the bat, but it’s something that has stuck in their memory. The flamingos add to the experience of this beautiful garden setting.

“Everyone is just so positive… But to see the outpouring come in about the flamingos, and the amount of calls and just support is heartwarming. It really is. To see people from other places that come out to visit and say, ‘you know what, that is a great idea, here’s 20 bucks’ and drop it in the box. You know, it’s just heartwarming,” said O’Grady. Dollar by dollar, together the community has raised almost $20,000. O’Grady who worked for the City, believes that you have to give back to your community. 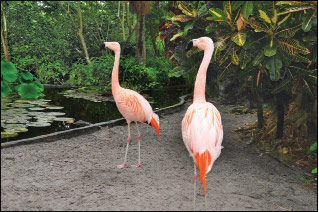 Taking a stroll, the eye-catching George and Lucy spy something that catches their eye; 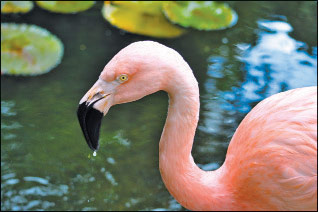 The original flock arrived in 1956, which makes the Sunken Gardens flamingos at least 58 years old.

Currently Sunken Gardens is working to create a children’s garden to teach kids about where their food comes from. Their long-term goals focus on growth – growth within the community and at the garden itself. They want to educate about food, sustainability, and wildlife, while growing the garden, continuing its prestige.

From an outsider’s perspective, the roots planted by the Turner family continue to grow deeper, but it isn’t just because of their efforts. It is because of the community. It is the local shops holding fundraisers, the group of volunteers that comes to help where they can on Wednesday, and the people raising awareness. When tourists visit Sunken Gardens, they can feel the community support; dropping money into the donation box shows they believe just as much as we do. St. Petersburg is like a flamboyance of its own. 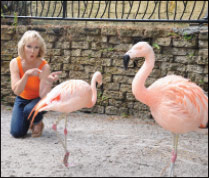 These caring and sweet birds by nature desire to feel connected to others and they form a community. Their desire to be with multiple flamingos makes me think about St. Petersburg. The dedication to keep the history alive and the passion to remain connected to other community members makes our community as bright and entrancing as a flamboyance flock. We rely on one another to protect St. Petersburg, ourselves, and the future. Raising money for a flock isn’t just about preserving the history; it’s about preserving the history in the making.

As O’Grady states, “I am making a difference, and I will have made a difference long after I am gone. Historic preservation… all of these things will have an impact long after I am here. When I retire I will be able to come enjoy it and bring my family and grandkids. It’s moving to see people appreciate it, too.” The small efforts today are seen as the gardens continue to make an impression on all who visit, from our children to new visitors. That impression will be passed down. Digging our roots deeper into the community the work today will leave something behind which will be here for years to come.

Editor’s note: Where did the name Sunshine City come from?  “In 1910, Lew Brown, editor of the city’s afternoon paper, created the city’s nickname through a publicity stunt. Declaring St. Petersburg ‘The Sunshine City,’ Brown instituted the “Sunshine Offer,” giving away his newspaper, the Evening Independent, each day that the sun did not shine. When free editions were provided, Brown encouraged recipients to mail the paper to their Northern friends. His offer gained national attention, and, during its 75-year history, the paper only gave away an average of five free editions annually.” SCA Journal

Ashleigh Powers is a Florida Native. Growing up with sand between her toes, Amelia Island was her home for many years until she moved to Tampa, Florida for college. Leaving the island lifestyle behind, she began a more fast pace life in the city. She recently graduated from the University of South Florida and now works as a research associate for Distinguished Professor Dr. Susan MacManus. Ashleigh enjoys getting out in the St. Petersburg community discovering all the wonderful stories people share. The historical richness and character of the community makes Ashleigh enjoy every story she writes. If you have any questions, comments or would like to suggest a cover story, you can contact her by email at AshleighPowers1@gmail.com.
Share: