A Gem in Our Midst 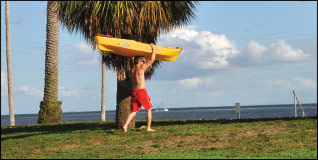 ‘When was the last time you spent a quiet moment just doing nothing – just sitting and looking at the sea, or watching the wind blowing the tree limbs, or waves rippling on a pond, a flickering candle or children playing in the park?” –Ralph Marston

As I’ve said many times before, beauty is everywhere; all you have to do is open your eyes. Flora Wylie Park is one of St. Pete’s true treasures. Nestled along the waterfront from the Sundial at 18th Avenue and North Shore Drive NE, and extending past the Aquatic Center, the park is truly remarkable. Residents, visitors, and our four-legged friends all enjoy the wide pathways, lush green landscapes, and our own beautiful family-friendly beach. Fortunately, our forebears understood the importance of having a city-owned waterfront for the public to enjoy, but it wasn’t without a fight.

Just after the turn of the 19th century the city’s population was exploding. Several business-minded individuals wanted to exploit the waterfront for its obvious commercial attractiveness, but groups of individuals – including the editor of the St. Petersburg Times, W. L. Straub – championed for the vast waterfront park system so many of us enjoy today. Eventually, with the financial support of the public, the parks won out, and in 2009 the city celebrated its 100-year history. Today, we have what is believed to be the third-largest waterfront park system in North America, trailing only Chicago and Vancouver. We truly are a small city doing grand things!

Flora Wylie Park is a true gem smack dab in the middle of the waterfront. The Park encompasses 11.2 acres with walking and biking trails, scenic lookouts of majestic Tampa Bay, fields for play or relaxation, and a bathing beach. At nearly any time, you can witness spirited games of soccer, children playing flag football, families picnicking, dogs frolicking, hyper-competitive games of beach volleyball, and just about every mode of exercise and recreation you could imagine. 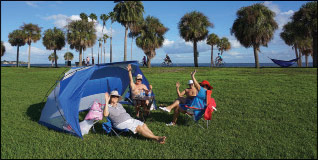 There’s also a strong chance that you’ve been enjoying Flora Wylie Park for years without knowledge of the park’s namesake. Flora Wylie arrived in St. Petersburg in 1919, and was a leading advocate for the park system until her death in 1965. She was instrumental in the founding of the St. Petersburg Garden Club in 1928, and at the time was the only woman ever to serve on the City’s planning board, a position that she proudly held for 17 years. While Mrs. Wylie loved the waterfront and had a home along Beach Drive, she was involved in many park initiatives, including among others the planning of Lake Maggiore Park on the City’s south side, the beautification efforts of City Hall, and the original pier. She worked tirelessly for the enrichment of our city and our park system. She loved Florida and was quoted as saying “We want to have plantings that look like the real Florida for visitors to see.” During her time, the planning committee referred to the waterfront parks simply as Waterfront Park No. 1, 2, and 3, but in recognition of all of Mrs. Wylie’s efforts the city renamed Waterfront Park No. 3 Flora Wylie Park in June of 1962.

In an era when conservation wasn’t at the forefront of our national conscious, Mrs. Wylie was forging ahead, serving as the conservation chairman for the Florida Federation of Garden Clubs.

I truly feel fortunate that individuals such as W. L. Straub had the vision and persistence to champion a system of public waterfront parks such as ours, and I thank conservationists such as Flora Wylie for continuing that tradition and leading efforts to maintain and beautify our remarkable waterfront. I believe our waterfront parks are a defining feature of the Old Northeast and for the city as a whole. I take pride when friends remark at how wonderful our parks are and how lucky we are to have them on our doorstep.

Next time you’re out strolling the palm-lined paths, riding your bike with your family and friends, or simply relaxing in the park, take a moment to recognize all of the natural beauty and offer up a quiet thanks to Mrs. Wylie for helping to preserve it for us and future generations.

Until next time, see you in the sunshine!