May 17, 2022by Janan TalaferNo CommentsAll, Miscellaneous 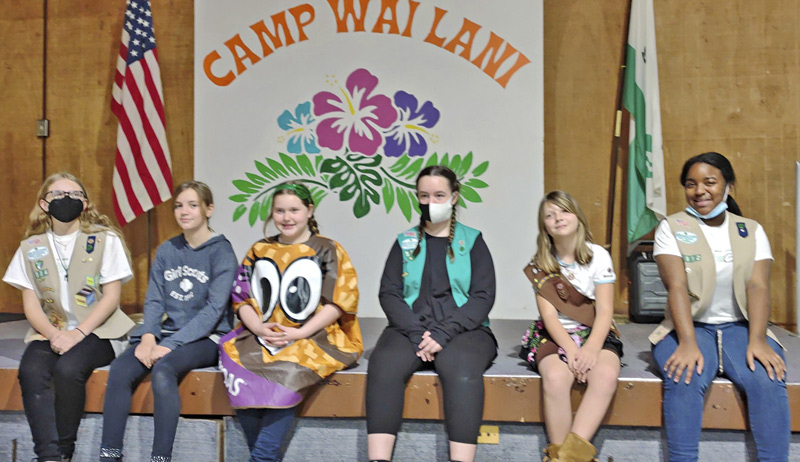 Growing up in a suburb of Cleveland, Ohio, Girl Scout camp was the highlight of my summer. Two weeks away from home living in the woods was a dream come true. It’s where I learned to sail a Sunfish, paddle a canoe, and never leave my sleeping bag unzipped after finding daddy longlegs taking a nap inside. Camp is also where I landed my first journalism “job” as a reporter for the little newspaper we published each week.

When an invitation came from the Girl Scouts of West Central Florida to visit Camp Wai Lani in Palm Harbor, enjoy some of the activities and sample this year’s lineup of Girl Scout Cookies, I jumped at the chance.

Kendra Abraham, the camp director and a former Boyd Hill Nature Preserve park ranger, said Wai Lani’s summer program is highly sought after by Girl Scouts from throughout the Southeast since it’s one of the few camps with direct waterfront access. Founded in 1971, Wai Lani is a beautiful oasis with 47 acres of natural Florida woodland and a small sandy beach on the shore of St. Joseph Sound, perfect for water sports.

Rather than tents, there are cabins, along with a swimming pool, enormous climbing tower with zip line and a marine science lab for the girls to work on their STEM (science, technology, engineering and math) skills. The camp is not just open in the summer; it operates year-round, with Kendra and staff overseeing a variety of programs.

On a recent media visit, Girl Scouts Jaidyn, Zoe, Shea, Violet, Sloan and Jada escorted us and served as spokespersons to promote the Girl Scout experience. Ranging in age from early grade school to high school, the girls are members of the West Central Florida Girl Scout Media Team, which gives them the chance to hone their public-speaking and leadership skills while interacting with local media and at community events.

Our first stop was the arts and crafts room where Shea, from Troop 33018 in Hillsborough County, took the lead helping us pick paint to decorate tiles. Next up was the science lab, with a quick demonstration at the microscope by Jaidyn, a budding scientist from Troop 50534 in Pasco County. Her mom, Fawn, co-leader of the troop, was along for the tour and described the range of activities the girls engage in, including learning to use a saw, screwdriver, hammer, as well as paint and varnish a wood-working project. I was impressed.

From there, we stopped at the climbing tower and zip line, which we politely declined to experience. But we were happy to hear about a nearby obstacle course and tire swing made from tires fished out of the Gulf of Mexico, an ocean conservation project that won a local troop a Girl Scout Gold Award. An additional camp ocean conversation project – a small batch of mangroves growing in an outdoor container – is part of a partnership with the Florida Aquarium, Kendra explained. Last stop was the boat house to pick up life jackets and kayaks for a quick paddle – an activity for which I earned my first Girl Scout kayaking badge.

The day ended with the girls offering samples of their iconic cookies. It’s always a hard choice, but according to Stephanie Adamo, vice president of marketing and communications for the Girl Scouts of West Central Florida, Thin Mints continue to be one of best sellers. Stephanie noted that 84 cents from every box of cookies sold goes back to the troop, giving them funds for activities and trips. One local Tampa Bay troop has been saving and planning for three years for a trip to several European cities – how cool is that!

Back in St. Pete, I was invited to be a guest speaker for a Brownie Troop at Shorecrest Preparatory School where I helped the girls, aged 7 to 9, earn their Celebrating Community badge. I even wore my sash full of badges from back in the day when I was a member of Troop 699 in the Lake Erie Council.

Unlike when I was a scout, girls today earn badges in computer technology, career exploration, robotics, and even space science. But one tradition hasn’t changed: Troop leader Brittany Decker and co-leaders Holly Rotlewicz and April Cabral kicked off the meeting with the Pledge of Allegiance followed by the Girl Scout Promise, which I was surprised to find I still remembered, word for word.

All three leaders have girls in the group – and all are former scouts themselves. Brittany’s daughter, Ally, is a troop member, as is Holly’s daughter, Sasha, and April’s daughter, Annie. The Shorecrest troop is new and this is Brittany’s first year as a leader.

“Shorecrest didn’t have a troop before, so we decided to start one last August,” she said. “We love doing fun activities and learning new skills. I just completed a training so we could take the girls on their first camping trip overnight at Camp Indian Echo in Hudson.”

March 12 was the official Girl Scout birthday – the day that Juliette Gordon “Daisy” Low founded the first troop in Savannah, Georgia in 1912. I was surprised to learn that the second troop in the country was started in Tampa. Jessamine Flowers Link, a friend of Juliette Gordon Low’s, organized a troop at her local church in Hyde Park in 1913. Another fun fact: Professor Walter J. Hoxie, a St. Petersburg resident, wrote the first Girl Scout Handbook in the U.S. in 1933. His daughter, Mary Russel Day, started Pinellas County’s first troop in 1924.

Today, Girl Scouts are global. The World Association of Girl Guides and Girl Scouts has chapters in 145 countries, and some of the world’s most notable women are Girl Scout alums. Astronaut Sally Ride, tennis star Venus Williams, actress Lucille Ball, journalist Katie Couric and former Attorney General Janet Reno are among the many who are proud to say they, too, were once Girl Scouts.

Learn more about the Girl Scouts at gswcf.org.

« Previous post
Our Sunshine Center: A Community Treasure for Seniors
Next post »
When the “Monkey Trial” Stars
Came to St. Petersburg