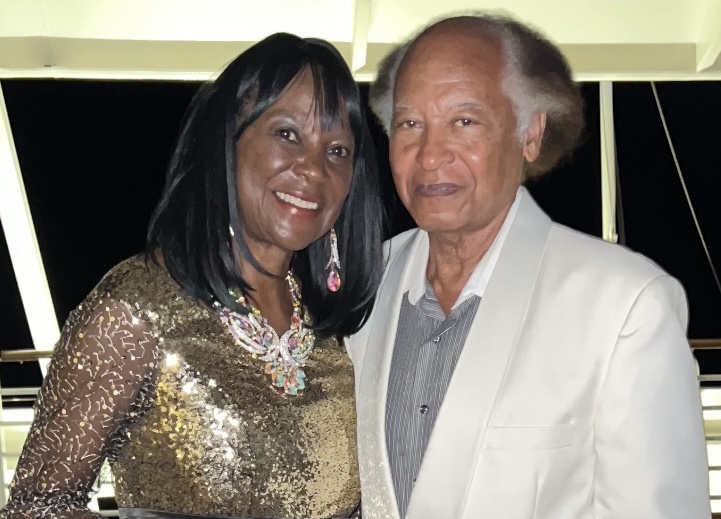 Jacqueline Nickson Cotman and Dr. H. Earl Cotman are an amazing couple, gracing our city with their considerable talents and civic activities for many years. They arrived in St. Petersburg in 1981 from East Lansing, Michigan. Earl was invited to join the staff of Bayfront Hospital as a radiation oncologist after serving as assistant professor of medicine at the University of Arizona Health Sciences Center, chief of radiation therapy at William Beaumont Army Medical Center while in the service at Ft. Bliss, Texas, and as associate in radiation oncology at Edward W. Sparrow Hospital in Lansing. In addition to his tenure at Bayfront, he established the practice of radiation oncology at St. Anthony’s Hospital and at Palms of Pasadena. Earl is now in private practice.

When Earl was a boy of 12 on the family farm in Archer, Florida, a cow died. Earl dissected the cow to learn more about its anatomy. This was the starting point for a lifetime career in medicine. Earl was one of the first African Americans to graduate from the University of Florida Medical School. He interned at Union Memorial Hospital in Baltimore and completed his residency at the University of Minnesota Health Sciences Center.

Earl was a pre-med senior at Florida A&M where he met Jacqueline Nickson, who was from Tampa. She was Miss Freshman, Miss Sophomore Attendant to Miss FAMU, and in 1966 elected Ms. FAMU. She majored in speech and drama and minored in language arts. Jacqueline completed college in a little over two years and was selected to Who’s Who in American Colleges and Universities. She later became a distributor for a national corporation and owned her own clothing business. Jacqueline is also a lecturer, writer, author, poet, and artist. Her daughter, Sochitl S. Cotman, is also an author.

Both Jacqueline and Earl have been in the mainstream of St. Petersburg’s social and cultural scene over the past 40 years. They originally lived at Bayfront Tower downtown, but later moved to Snell Isle, where they still reside. Jacqueline was the first African American member of the Pinellas County Medical Society Auxiliary and was the first African American Floridian member of the Association of Junior Leagues. She has also served on the Pinellas County Arts Council, the Mahaffey Theatre Foundation, and the Board of Trustees of Eckerd College. Both she and Earl have been strong supporters of the Museum of Fine Arts, the Dali Museum, the Florida Orchestra, and the Bayfront Center Foundation. As if their accomplishments were not impressive enough, both Cotmans are also pilots and sailors.

Jacqueline traces her roots back to the Reconstruction period of Florida history and beyond. The family name has been spelled both “Nixon” and “Nickson.” “My great grandfather, John William (“Cubit”) Nixon, came to Florida from Perquimans County, North Carolina, with his half-brother Thomas D. Nixon about 1842. Cubit was of Cherokee heritage and Thomas was white. Cubit originally lived in Gadsden County and later moved to Polk County about 1913. He had three wives and over thirty children, dying in Homeland, Florida at the age of 107.”  She recalls Cubit had six aspirations for his children. “He wanted his children to live forever with dreams of the world. He wanted them to go to school and be educated, paid for their work, and own property. He wanted them to have the right to vote and to be treated humanely. And lastly, he wanted them to have a greater world.”

In 1892, Cubit was able to help his son Jessie gain entrance to the Florida Normal School for Colored, which later became Florida Agricultural and Mechanical School (FAMU). FAMU was founded by Jonathan C. Gibbs, Florida’s first African American Secretary of State and Superintendent of Public Instruction, and namesake of Gibbs High School. Attendance at FAMU was to become a tradition in the Nickson family. Jacqueline recalls that she wanted to attend Fisk University, but her parents insisted that she attend FAMU. She says, “As it turned out, that was the best decision because that is where I met Earl.”

Jacqueline has explored her roots extensively. She has found anthropologist Zora Neal Hurston’s books about the South an invaluable resource, particularly her 1935 autoethnographic book Mules and Men. An autoethnographic style is the use of self-reflection and writing to explore anecdotal experiences connecting them to wider meanings. Mules and Men documents African American folklore and the lives of residents in Eatonville and Polk County, Florida. Eatonville was one of the first self-governing, all African American municipalities in the United States. The book includes the names of many early settler African Americans, including some related to Jacqueline. Hurston also wrote the historical novel Their Eyes Were Watching God based on the Okeechobee Hurricane of 1928 in which the storm surge caused a breach in the lake and many deaths.

The Nixon family was active in Florida politics during the era of Reconstruction. Jacqueline calls the Reconstruction period “the first period of Affirmative Action in the United States. The second period was represented by Martin Luther King and the Civil Rights Movement of the 1960s.”

Among Jacqueline’s literary works is a soliloquy entitled “Harmonies of Liberty” (unpublished) in which she assumes the persona of her great grandfather, Cubit, and her great grandmother, Henrietta, imagining the story of their lives and reflecting on Reconstruction and Jim Crow Florida. It is a variation of Zora Hurston’s autoethnographic style.

She writes in her grandfather’s voice: “President Lincoln had died a whole generation ago but the people never ever wanted to forget him…. The south continued his causes with the Thirteenth, Fourteenth, and Fifteenth Amendments. The colored man’s greatest achievement in American history will probably end up being misunderstood because we do not have notebooks on this yet. It took years for us to speak up on every issue, get the results written down and send to Washington for approval.”

« Previous post
Empowering People Through the Magic of Sailing
Next post »
An Ode to St. Pete Summer