A Vision from Our Youth: We Built this City! 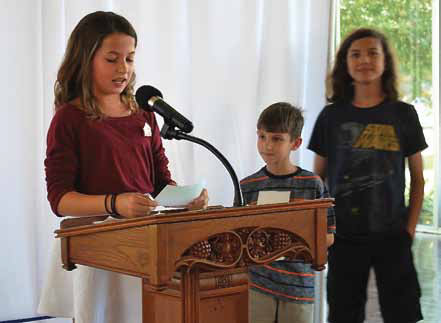 Poised yet enthusiastic, the newly elected mayor steps up to the podium and addresses the crowd gathered for Seaside City’s ribbon cutting ceremony. After days of tireless exploring, brainstorming, developing, lots of fun, and a little campaigning, she promises to keep the city clean with “garbage cans and recycling bins on every block,” along with two free cookies when visiting camp.

Mayor Charlie Harrod, age 10, has just completed the City Builders summer camp. The program is jointly sponsored by the Museum of History, the Historic Old Northeast Neighborhood Association (HONNA), Pinellas County Schools, and St. Petersburg Preservation, and is now in its third year. In the span of just one week, she along with a group of other creative 9-13-year-olds, toured the city by car and on foot; learned about the history, art, and architecture of St. Pete; heard from prominent city officials; and created their very own city, ground up from cardboard boxes, construction paper, and various other items allowing their creativity to flourish.

Under the leadership of Lynne Mormino, Rui Farias, Robin Reed, and Jenna Tice, engaging activities were planned for the camp. Mormino, museum board member and a key program organizer, elaborates on their adventures. “This is the first year we tried to add speakers in between learning activities.” Each day the group participated in a tour focused on a particular aspect of the city. The visit was then complemented by a guest speaker. “On the first day, Emily Elwin from St. Petersburg Preservation took us to a combination of residential and commercial buildings. We saw different styles of residential homes. That day, someone from the fire station also came to the museum, brought their fire truck, and quizzed kids about where we should have our fire station in the city. ”

The remainder of the week was similarly dynamic. They went to City Hall and heard City Councilwoman Lisa Wheeler-Bowman discuss the important public buildings. Sports and leisure visits included the historic shuffleboard by Christine Page. A lesson in the tourist industry took place at the Vinoy, paired with a discussion led by Derek Donnelly, one of the founders of the St. Pete Mural scene. On the final day, they heard about the importance of recycling from City Councilwoman Darden Rice and were given a miniature recycling bin.

“In today’s age, so much of what kids do is online. Here, we basically say, ‘Let’s put it all away’, and it has worked. In this program, they get to see something from start to completion,” Mormino says. After each tour and speaker visit, Jenna Tice gathered the group to review the highlights of the day. She summarizes their thoughts in bright-colored markers on a paper tablet and easel. 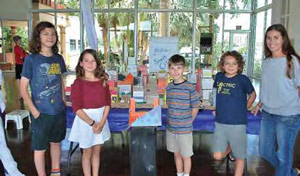 Tice teaches 5th grade math and science at Belleair Elementary. She explains, “I ask questions to help guide them, and they take it from there. They each have a stake in the city.” Tice has also been involved all three years. “It’s great – a break from the rigors of teaching during the school year. It’s artistic and creative. I love this camp!” The kids adore Jenna. Working on finishing touches on the city, Leland Kilborn asks Tice where he should put the remaining solar panels. She responds, “Let’s take a look, which buildings do you think need solar panels?” He runs off and locates buildings and decides on a few. Mission accomplished.

Several years back, Rui Farias, Executive Director of the Museum of History, and Robin Reed, Board member of HONNA, heard about Box City programs for kids in other areas of the country and created the program for St. Petersburg. Farias, who also teaches Florida History and U.S. History at St. Pete High School says, “We wanted to create a historic-type program that was fun for the kids.” Having always been intrigued by St. Petersburg’s interesting past, he explains, “There are so many cool things about this town’s history. The city was built on advertising – so from day one, every promotional gimmick people could think of was meant to get people to come to the city. It’s interesting to see how that all evolved.”

Sprinkled across Seaside City are highlights of what the kids saw or heard during the week. Each year, the kids integrate new concepts. Reed comments, “They feed off of each others’ ideas. This is the first year we’ve had wind power; the first year with solar panels on the buildings. From year to year, none of the cities are the same. It’s like a puzzle they have to organize, with the layout underneath.” Seaside City is replete with a hospital, schools, arcade, amphitheater, and veterinarian. They also designed the city with the majority of residences located along the water.

Mormino notes, “We try to get them to think about different modes of transportation. Each year, I’m always amazed at the different kinds of techniques they use.” She points to the airport and the clever pipe-cleaner Segway design. Last year, the group decided on a train station.

Mid-week, the group visited City Hall and decided their city needed a mayor. Charlie explains, “We had a speech we did, and then everybody voted for somebody, but we couldn’t vote for ourselves.” Her theme? “I promised that there would be no more littering, so our city would be all clean!” And so she was elected mayor. But it takes more than just a mayor to run this city. Seaside City has its directors for zoning, power, parks and recreation, and even an art curator.

A veteran of the City Builders Camp, Sam Phrasavath, is in his second year. At 12, he is also the oldest in the group, and helps keep the others grounded and focused. “All of us decided on the buildings we needed, as a group, and I made some buildings that needed to keep this city running… buildings a proper city would need. He created the post office (a favorite), museum, condominiums, and a recycling building. His post office was thoughtfully designed using two buildings to sort the flow incoming and outgoing mail. 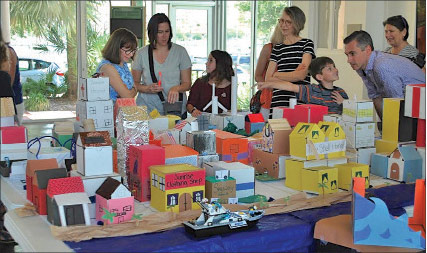 Parents and guests viewing the city after its unveiling

“My role in the city is as art curator. I place art all around the city. Art in the city makes it more vibrant and gives it a story. Gives it character. I made murals on the coffee shop, post office, and arcade.” When asked if he might pursue a field in the arts when he gets older, he replied, “I don’t know what to do when I grow up, but I really like art.” He has some time to decide as he will be entering the 7th grade at Thurgood Marshall.

The week concluded with the unveiling of their city. After introductions by Mayor Charlie Harrod, each member of the city builder team spoke.

Leland is introduced as the zoning manager who is also head of the recycling program. He steps up to the podium. “I’m in charge of solar power. I made the panels, windmills, and invented something inspired by Benjamin Franklin.” His invention used lightning rod placed on a tall iron tower. It is designed to turn lightning strikes into electricity which is supplied to the power plant. Regarding his strategically placed dump, he remarks, “Every building is in its right place. Why would you want a dump near your house? It would be stinky!”

Seaside City’s recreational director spoke next. “I would like to acknowledge some of the great recreational things we have in our city,” begins Indy Watts. “First, we have Smiley Park, where we can relax and have a nice time. Second, we have a nice pool, which is also very relaxing.” He points out their soccer field, home to their famous soccer team, the Seagulls, and bellows out, “Go Seagulls!” And in the true spirit of fellowship, he adds, “Finally, I would like to compliment our police officers who keep our city safe and our parks nice.”

As each child speaks, it becomes more and more apparent how proud each is of their city. Farias summarizes, “It is an honor to watch these kids do what they did this week. It has really been awesome to see them come in on Monday, not really knowing what they were going to experience, and then see what they’ve built.”

Mormino adds, “It makes them realize a sense of place, a sense of what kinds of things you want your city to represent. We know our city is very important, but we also want our city to represent the future. I’m very proud of them – it makes them focus.” After the ribbon is cut, the kids teeming with excitement, run to their parents and eagerly show them Seaside City. They carefully point out each of their contributions. This group of young, smart, and creative minds, brings the possibilities for our city to new heights!

The next camp is scheduled to be in June 2017. For more information, please contact Rui Farias at rui@spmoh.org