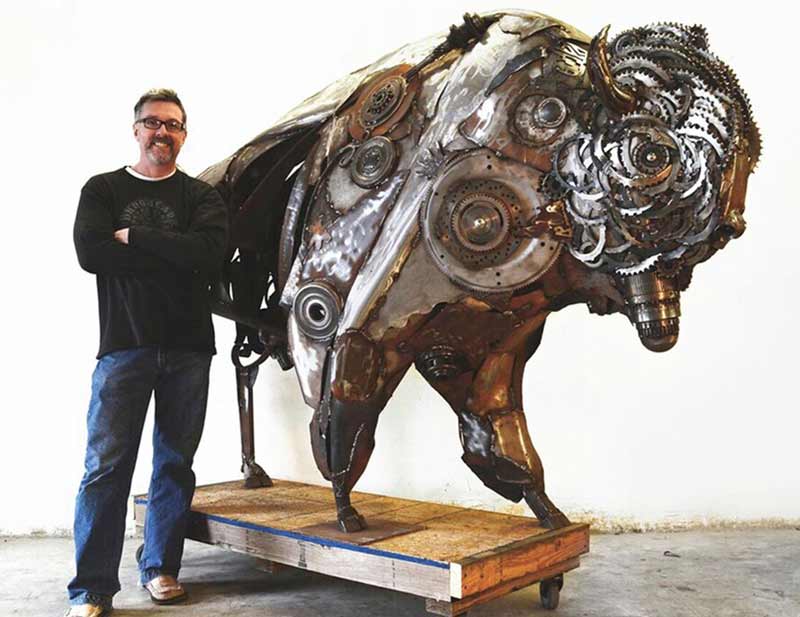 It’s no secret that St. Petersburg is quickly solidifying its reputation as an arts destination and an arts community. We have world-class museums, statues, and other visual art in our parks; professional musicians from The Florida Orchestra working with students in schools; colorful murals brightening the sides of buildings; and dozens of cultural centers with full event calendars serving our community.

While this is the product of so many people and organizations, the work of the St. Petersburg Arts Alliance (SPAA) helped pave the way.  Founded seven years ago, the SPAA is a local 501c3 with the highest Guidestar rating (platinum – to put this into context, only 8 of over 1,000 St. Pete non-profits have this rating), and is part of the Office of Cultural Affairs with the St. Petersburg Chamber of Commerce.

Tucked into the chamber building downtown, this small group of artistic advocates is busy organizing the Second Saturday ArtWalk (a beloved St. Petersburg tradition which has been postponed only once, due to Hurricane Irma); the SHINE Mural Festival and the St. Pete Festival of the Arts (both events coming up in October); the Arts Business Academy (serving arts entrepreneurs and creative businesses at the Greenhouse); Funding Futures (providing scholarships for after-school and summer arts education); and the Artists Grant Foundation.

“It’s a lot, but we’re happy to do it,” says John Collins, SPAA founder and executive director. “We’re proud to partner with the Chamber. They realize the value of what we do.”

As Collins recounts, seven years ago, when the Arts Council was disbanded, there was no organization of this kind supporting the arts – and living artists – in St. Pete. Today, along with a long list of activities and events, the SPAA provides individual grants to St. Petersburg artists. The grants are all approximately $1,000 each, and submissions require a community engagement element.

According to Collins, many artists use their grant funds to give back to the community or create something that gives back to other artists. For example, past recipient Wendy Durand made a series of clay plates with her grant funds, then hosted a silent auction for them and raised thousands of dollars for the St. Pete Free Clinic.

“Every artist we’ve reached with a grant has given back to the community in some way,” says Collins.

The full list of grant recipients can be found on the SPAA website, along with information about upcoming events and ArtWalks. You can also become a member, a subscriber to the ArtBeat newsletter, a patron, or a volunteer at their website www.stpeteartsalliance.org.

Meet some of the grant recipients in our neighborhood: 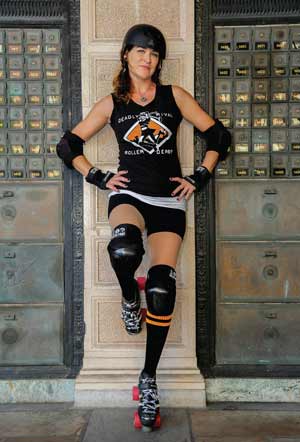 Arnie Arluke has lived in St. Pete for three years. He originally hails from Boston and Hyannis Port, MA. Arnie is a photographer, and in his words, “My goal is to exhibit photographic portraits I have taken of Deadly Rival Roller Derby skaters. Rather than photographing roller derby skaters in action as they skate against other teams, I have photographed them off the track in various locations in St Petersburg.”

Donald Gialanella has also lived in St. Pete for three years. Before St. Pete, he lived in Maplewood, NJ (hometown); New York City; Taos, NM; and Los Angeles. Before becoming a sculptor, he worked as a graphics producer at ABC-TV in New York in the 1980s, where he received an Emmy for Monday Night Football in 1990.

In his words, “My welded steel assemblage sculptures are created from familiar objects re-assembled in a most unfamiliar way.  In these sculptures, you can see transmission parts, mixing bowls, pitchers, tea pots, hub caps, pots and pans, dog bowls, coffee urns and vessels of every description. This technique comments on our curious relationship to the life-cycle of utilitarian objects and questions the viability of a disposable culture. The grant will help me explore something I’ve been thinking about for a while now but didn’t have the funding to launch the project until now – creating a steel sculpture using atmospheric air pressure implosion.”

Say what? Donald explains: “Normal atmospheric air pressure at sea level is 14.7 pounds per square inch. Atmospheric pressure is basically the weight of air pressing down on us at all times. To ‘crush’ a steel sculpture, first the air inside is heated and the steam allowed to escape. Then the sculpture is sealed off and cooled rapidly with water to create lower pressure inside which will cause the atmospheric pressure outside to crush it inwards.”

Donald’s sculptures can be found at the Dali Museum downtown St. Pete (the 17-foot-wide steel mustache outside is his); in Pinellas Park in front of the Barbara Ponce public library; on Lemon Street in Lakeland; in Tamarac, FL; in Jacksonville’s Klutho Park; in Roswell, GA; in Decatur, GA; and in several sites in Colorado, New York, Arizona, and California. His pieces are also in the private collections of Angelina Jolie and Howard Stern. His atmospheric air pressure implosion sculpture will be a public event. Stay tuned at his website www.donsculpture.com, and the SPAA website for details. (www.stpeteartsalliance.org.) 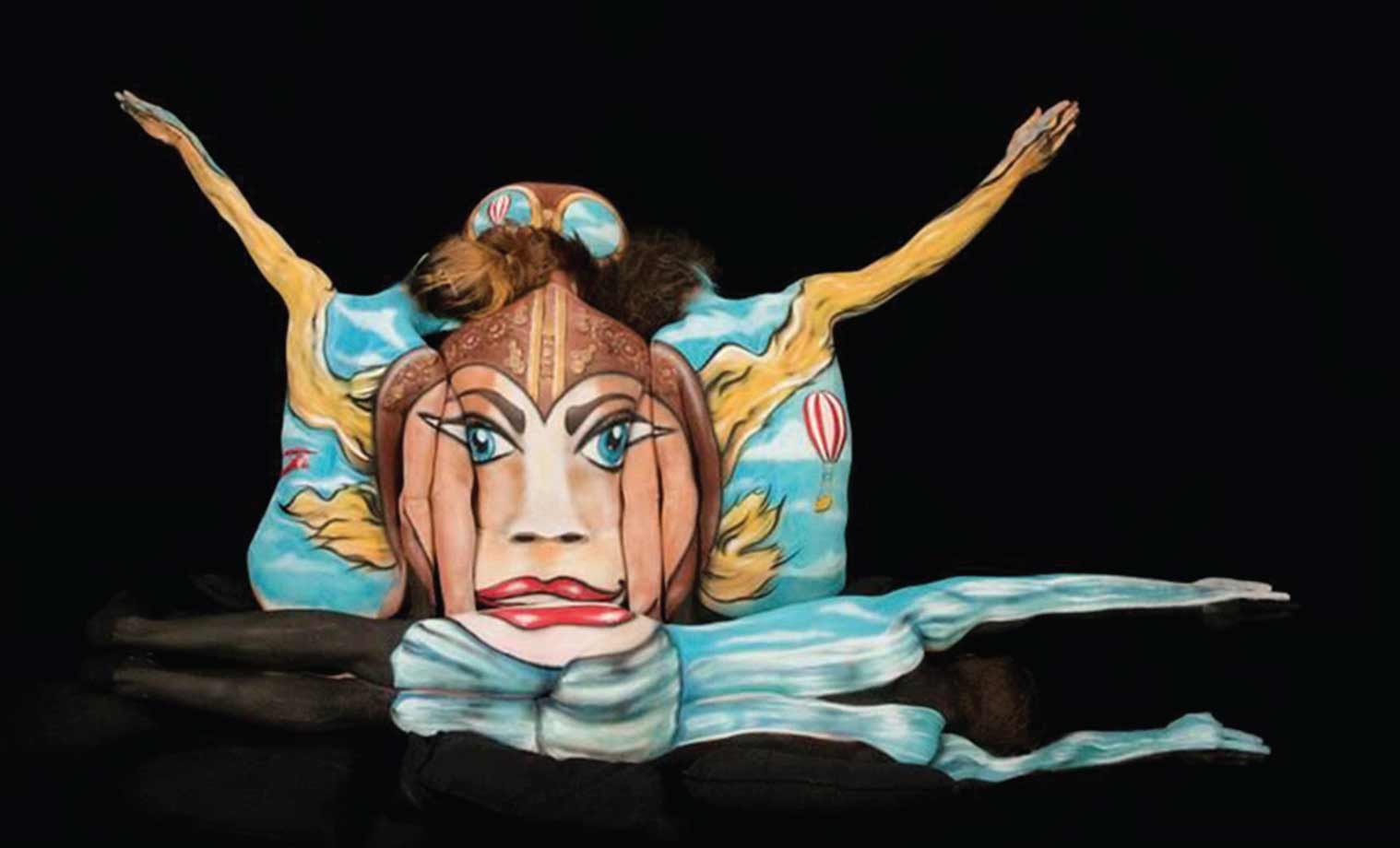 Nicole Desiree Hays has lived in St. Pete for four years. She is a body-painter originally from Van Buren, AR. In her words, “The human canvas is significantly different than a regular artist’s canvas. Over 10 years of bodypainting experience has given me the technique, skill, and creativity needed to generate unique, fully formed fine-art bodypainting concepts that complement their surroundings.

“Michael Sheehan, my collaborating photographer, was born and raised in Ireland but has lived and worked in Florida for the last 30 years. As a practicing psychiatrist, he is a longtime student of human perceptions, emotions, reactions, and conditions. His main photographic work has been as a portraitist with a special interest in environmental portraits.

“This grant will help me create a published, permanent work involving the temporary artform of bodypainting. Though I do not have any permanent installations in St. Petersburg, I host a monthly Fine Art Bodypainting Jam and Art Exhibit at Bar@548. I’ve also exhibited at the Dali Museum (12 Days of Dali) and Cigar City Brewing Company.” Nicole’s book launch will take place on August 18th at the Kozuba & Sons Distillery in St. Pete. 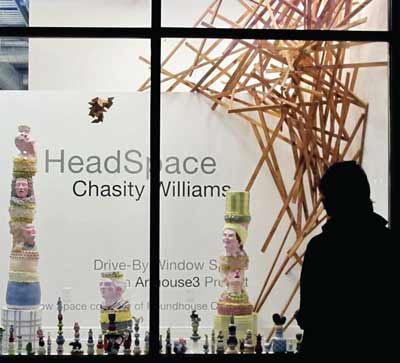 Katherine (Kathy) Gibson has lived in St. Pete for almost three years, yet she’s been local to the area for much longer. She grew up in Polk County (Lake Wales), attended UF in Gainesville, moved to Tallahassee after that, and then to Tampa for about 25 years before moving to this side of the Bay. She’s a curator and exhibit developer.

In her words, “I am not what you may think of as a producing artist. I don’t create individual pieces, but I do create exhibits, where I work with many artists in putting various exhibits together. I like the whole package – selecting artists, selecting the work, coming up with the title, creating the invite, placing/installing the show, and then marketing the heck out of it! I have been a guest curator at the Morean (2016 Orange State) and Florida Craft Art (2017 Round Square) – and before that, I was the director/curator of Gallery 221@HCC, Dale Mabry campus, 2011-2014.

“My artistic point of view is developing. While I’ve been in the arts – generally, for over 20 years as a collector first and then as a self-taught installer and sometimes curator – I’m growing into my own. Collecting began for me with primitive folk art in the early ’90s and then I got to know Ruby C. Williams, a now-known authentic folk artist in this area. That partnership grew to include many other artist collaborations, more frequent shows, and eventually becoming a regional art consultant working in homes and business, helping clients to find and place art.” 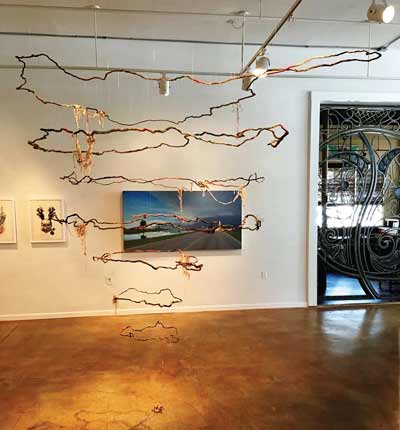 Kenny Jensen and his wife, Maggie, have called St. Pete home for several years, and while he’s not technically a St. Pete native, Jensen says he feels like one. His roots run deep – and happen to be one of his artistic mediums.

Jensen combines paint with found things in nature – dead roots, dead branches, things he’s repurposing into patterns and a new narrative. He described the arduous process of digging up torpedo grass, digging down a-foot-and-a-half to remove the plant’s elaborate rhizome root structure. “Torpedo grass has a negative connotation in society,” he explains. “It’s a symbol of an unkempt yard, a neighbor who lets his yard go, yet it’s the hardiest plant, the one that wants to be there the most, the survivor.” Amid piles of torpedo grass and the elaborate, exposed roots, inspiration struck. “I used the roots and the pattern they created as part of the design for my next piece.”

Both Jensen and his wife have strong ties to horticulture (Maggie is an accomplished gardener), and Jensen often collects driftwood in the swamps of The Floating Woods, as he calls it, their family land in Gulf Hammock with a cabin built out of Cyprus trees by his grandfather.  “One day we’d like to turn it into an artists’ retreat and an organic farm,” he says.

With his grant, Jensen will host a pop-up art show at Openhouse St. Pete, the new event space adjacent to Intermezzo Coffee & Cocktails on Central Avenue, bringing works of his art into the wider community.

“It’s essential at some point to approach your art as a business,” says Jensen. That concept is the very reason the SPAA offers their business, marketing, and branding classes for local artists as part of their Arts Business Academy. Another resource Jensen uses is Patreon, a website that links patrons with artists. As a working artist, Jensen cites the mantra we’ve heard before: the challenge of balancing work with art with paying the bills with family with sleep.

Jensen explains one of his key inspirations: his two-year-old son. “I’m approaching my work now trying to see through this lens of mystery and wonder – which is a continual state of a toddler – seeing the general wonder of things and watching this new person discover the world. It’s incredible.”

One of Jensen’s latest pieces was displayed at the Morean Art Center during their recent exhibit, Water Over the Bridge: Contemporary Seascapes, a curation of work that “reflects the effects of global warming on our oceans.”

Thought-provoking and, in some cases, very affecting pieces filled the space with dire realities of our world; realities that are easy to push out of our minds when we’re not seeing images of trash piled up on beaches or sea turtles and straws (the adjacent Banyan Café features a prominent NO STRAWS sign by its register).

“The great thing about conceptual art is that the emphasis is more on the questions it raises, the dialogue. The explorations of an exhibit like this don’t have a predetermined destination,” Jensen says.

Watching a young family walk through the Water Over the Bridge exhibit at the Morean on their way to art camp was an encouraging experience. The young daughter asked her parents about a piece by local artist Babs Reingold (The Last Sea) featuring a boat full of and surrounded by discarded plastic containers and distressed, seal-like creatures. Conversation ensued among the family members: “This is why we recycle… why we care about the decisions we make that affect our planet… everybody helps…”

The exhibit was powerfully thought-provoking, and hopefully, action-empowering. For all ages, it created a stirring dialogue like Jensen said, and while that’s just the first step, it’s a step propelled by our local art – in the right direction.

Congratulations to all of the grant recipients and thank you to the St. Petersburg Arts Alliance for raising the profile of artists in our community.