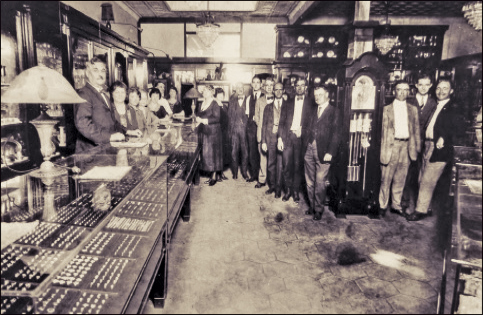 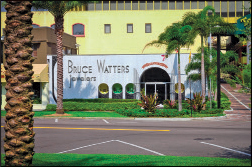 A new chapter is about to open in the story of Bruce Watters Jewelers. Bruce Watters is about to move, but not far. In fact, this legendary St. Petersburg business has never moved far over the course of the last 109 years from its original location near Central Avenue and 2nd Street in downtown St. Petersburg. Bruce Watters is the city’s oldest business. Distinguished for its high-quality diamonds, jewelry, and watches, it is the place where generations have bought their engagement rings, wedding bands, anniversary gifts, holiday presents, and Valentines remembrances. It is the city’s most prestigious jewelry business. It is the place where four generations of the Watters family have practiced their profession, and from which they have given back to our community. Go into the store today and chances are you will find co-owners Bruce Watters and his son Jim Watters personally tending the long-time family business, although now with the help of several associates. 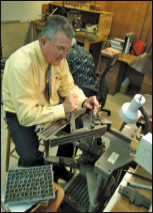 Jim Watters at the engraving machine

In 1925, Rogers’ nephew, Bruce Weaver Watters, drove from Bellwood, Pennsylvania to join the business and the name was soon changed to Rogers and Watters. Bruce had previously studied to be a watchmaker at Bowman Technical Institute in Pennsylvania, and worked at Pennsylvania jewelry concerns in Tyrone, State College, and Altoona. He was no novice to the business. In 1933, Rogers retired and the business was renamed Bruce Watters. In 1944, Bruce acquired another leading jewelry business, Cole Jewelry Company. Over the years, the business was centered on Central Avenue, occupying various locations including 322, 293, 326, 360, and 434 Central. Over the years, while maintaining its downtown location, the business established branches at Central Plaza, Bellair Bluffs, the Bath Club at Reddington Beach, Tampa’s Northdale area, and also had a display at the Princess Martha Hotel. Bruce Watters also operated the fine jewelry department at the old Maas Brothers Department Store. The Central Plaza store was closed in 1980 as the Central Plaza shopping complex gave way to competition from Tyrone Mall. Today, Bruce Watters maintains only the parent store on Beach Drive.

In 1944, Bruce Watters Jewelers acquired another leading jewelry business, F. H. Cole Jewelry Company (411-413 Central Avenue). The display cases and chandeliers shown are still in use today in the Bruce Watters store. Taking a photo of this type at the time was unusual, and relatives and friends were invited for the occasion. Image 1895.

Bruce Weaver Watters passed away in 1986. His son, Bruce Walter Watters, recalls that during the Great Depression of the 1930s, someone came into the store wanting to sell a ring. He asked his father for twenty dollars. Bruce told the man that his ring was worth far more than $20, but that he was not able to give him what it was worth. The man said, “I will just take $20 as I need it desperately to buy a bus ticket.” So Bruce gave him the $20 and put the ring away in the safe. Much later the man was back in town and redeemed it. 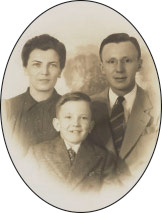 He said to Bruce, “You were the only person in St. Pete willing to help me.” More recently a patron came in the store wanting to buy a ring for his wife to celebrate their 60th anniversary. He stated, “Sixty years ago I had just come to St. Pete and I bought my original engagement ring from Bruce Watters and it cost $200. Your grandfather told me that I could have the ring for just $20 now and pay the rest on time to establish some local credit.” These stories and others speak to the character of both Bruce Weaver Watters and the business. Bruce Walter Watters remembers his dad as being “very social; people really liked my dad; and that was good for business.” Jim Watters, Bruce’s son, notes, “The real reason Bruce Watters has been so successful for so long is that we are trusted and known for quality and integrity.”

Operating a business is a high-risk activity. Many do not last five years. But Bruce Watters Jewelers has operated for over a century, including depression, recession, and war years. During the hard years of the Great Depression of the 1930s, Bruce Watters Jewelers found itself as buyer rather than the seller. As Bruce Walter Watters said, “We lived on $25 a week during the Depression. We had diamonds, but the home folks were offering diamonds to us.” During World War II, the business actually did well selling military insignias and watches to the thousands of military personnel training in St. Pete.

Bruce Walter Watters joined the business in 1959 after attending Emory University and serving in the Air Force as a multi-engine and helicopter pilot, and has been a leading part of it ever since. He was born in 1930 at Mound Park Hospital. He attended North Ward and Woodlawn elementary schools, Mirror Lake Jr. High School, and St. Pete High. As a youth, he remembers hunting in north St. Pete and boating in Coffee Pot Bayou, as well as swimming on the high school swim team and playing in the high school band. In a 2009 oral history given to the History Museum, Bruce observed, “St. Petersburg is an extremely clean town; a good town for physical cleanliness; clean politics, mostly; orderly development; and a great place for raising kids.” 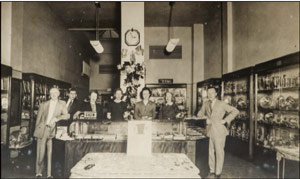 Bruce Watters Jewelers at 360 Central Avenue. Bruce Weaver Watters is on the right. Image circa 1938.

Jim Watters  remembers starting out in the business polishing silver and dusting shelves. He also remembers being “fired” at the age of 10 because he “did not think the top shelf needed dusting.” But he was shortly “rehired,” eventually joining the business as an adult full time. In 1982, he worked at the Bellair Bluffs store. After that he worked at the St. Pete store.

Over the years the Watters family has taken an active role in community civic life, as well as operate a successful business enterprise. In the 1940s, Bruce Watters, Sr. served as chair of the city’s Civil Service Commission. All the Watters family have been long-time members and supporters of the local Rotary Clubs. Bruce Walter has been active in the Chamber of Commerce, the Downtown Merchants Association, and served as commodore of the Yacht Club, as did his father. Recently, Bruce Watters Jewelers has been the presenting sponsor of the Annual Holiday Illuminated Boat Parade and a significant contributor to the Children’s Dream Fund. Every year, Bruce Watters Jewelers has donated a diamond brooch awarded to the newly crowned Sun Goddess during the Festival of the States. 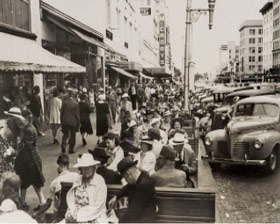 Serendipitous photo of Bruce Watters (we think) as a 13-year-old sitting on a green bench on Central Avenue near the Bruce Watters store. Bruce is wearing a tell-tale watch, something most teens would not have worn at the time. Nearby is his grandmother, Maud Stevens in the white hat, his aunt Bobbie, and possibly his mother Nome Watters. Image 1943. 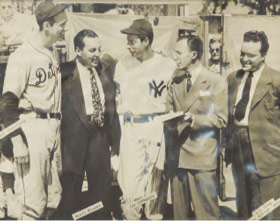 In the early 1970s, a business colleague suggested that Bruce Watters move to Beach Drive, which they did. They were advised, “That location is going to be something some day!” In 1998, Jim Watters and a few associates purchased the entire southeast section of the block on Beach Drive facing the Museum of Fine Arts and St. Pete’s renowned Waterfront Parks where the business now resides. Jim states, “We were incredibly lucky to be on Beach Drive.” He believes St. Petersburg’s Beach Drive is the “real deal, like Rodeo Drive in Beverly Hills, or Ocean Boulevard in Miami. This is where everyone is out enjoying themselves on the sidewalk dining and eating. This is the spot for St. Petersburg. People from all over the world come here.” He applauds the new Sundial complex opening just a couple of blocks away as further adding to St. Pete’s downtown waterfront vitality. The business is still operating at 224 Beach Drive NE, but not for long. Soon Bruce Watters will be moving a grand total of 72 feet south to a new building to be constructed on the site formerly occupied by Red Cloud Gallery. Service to the public will be seamless. The owners of Bella Brava Restaurant will open a second, but different, restaurant in a new building to be constructed on the current Bruce Watters site. But all will not be new. The feel will remain the same. Bruce Watters will take with it the red carpet, chandeliers, and fine jewelry showcases that have graced its main store since acquiring Cole Jewelry over 70 years ago. And, of course members of the Watters family will be there to personally greet and assist you. 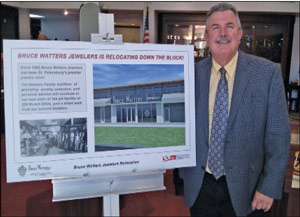