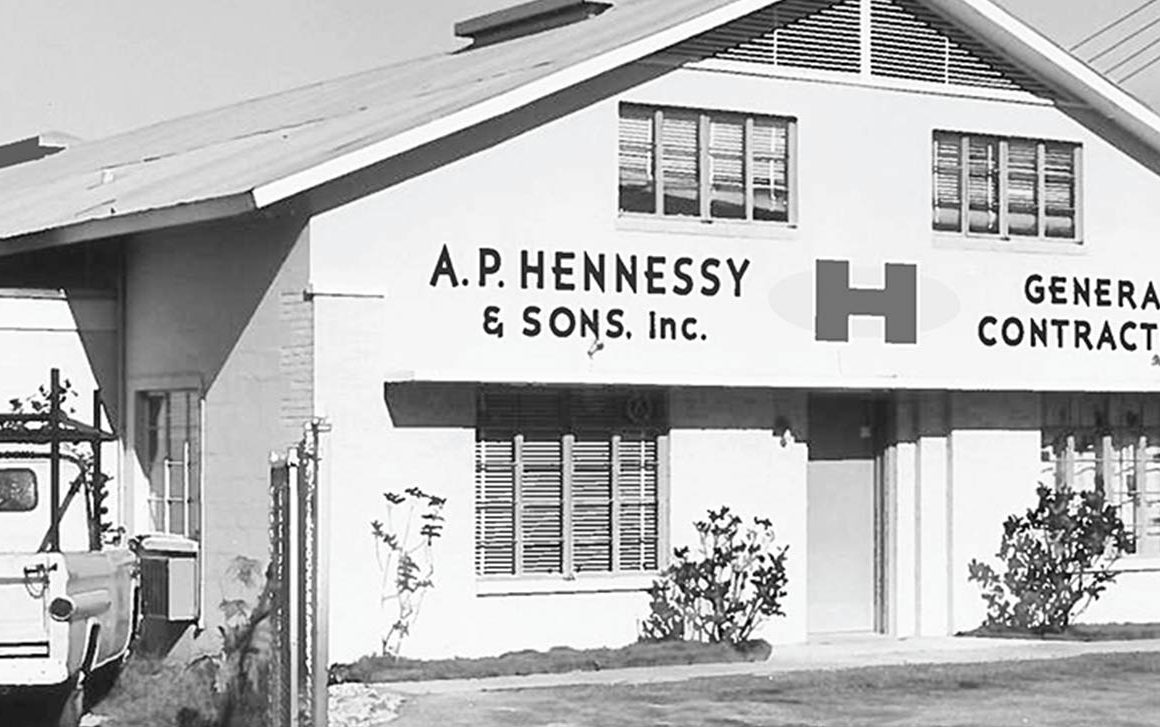 It is said that a city’s history is written on its buildings. Perhaps no other construction company has done as much to write that history in St. Petersburg as Hennessy Construction. This year Hennessy is celebrating its centennial. The company has continuously operated in St. Petersburg since 1920. Over that time, it has built some of St. Petersburg’s most significant buildings, including St. Mary’s Church, the Fine Arts Museum, St. Anthony’s Hospital, and the Tampa Bay Times Press Building.

The company was founded by A.P. (Aneas) Hennessy. A.P. emigrated from Ireland to the United States at the age of 19. He first went to Chicago, but in 1917 he moved his family to St. Petersburg. A.P. began work as a carpenter, but soon formed a partnership with Charles DuBois. Together, they established a construction company known as DuBois & Hennessy, Inc.

Hennessy’s first major project was the building of St. Mary Our Lady of Grace Catholic Church which still graces the corner of 4th Street and 6th Avenue South. It is one of the first of several St. Petersburg iconic buildings seen as you exit the Interstate via 175. St. Mary’s was designed by renowned architect Henry L. Taylor who also designed the Vinoy Hotel. The church was built in the Byzantine style with Romanesque features and was constructed in 1929.

Hennessy – who himself was Catholic – became somewhat of a specialist in church construction. In the 1930s, he undertook significant projects involving St. Paul’s Catholic Church, St. John’s Catholic Church, St. Joseph’s Catholic Church, and Congregation B’nai Israel Synagogue. At St. Paul’s, he built the convent, rectory, and later the high school. At St. John Vianney, he constructed the auditorium. In 1930, DuBois and Hennessy also built the famous open-air Solarium for sunbathing on the approach to the Pier (nudity was permitted for ‘medicinal purposes’). The Solarium, the entrance of which was built in the style of an Egyptian temple, closed in 1961.

In the 1940s, Hennessy Construction was incorporated as A.P. Hennessy & Sons, Inc., and A.P.’s sons Lawrence (“Kel”) and Thomas assumed partial ownership with their father.  A significant project at that time was the construction of St. Anthony’s Hospital. A.P. Hennessy died in 1951 at the age of 68. Projects undertaken by Hennessy Construction in the 1950s were the MacDill Air Force Base fuel-storage facility, the Webb City Supermarket, St. Joseph’s Manor, the cafeteria at St. Paul’s Catholic Church, and the YMCA educational building.

In 1958, Hennessy & Sons began construction of the St. Petersburg Times Press Building and Warehouse which is still in operation on 34th Street N. This was their most challenging project up to that time. The complex required 300 tons of structural steel and 1700 cubic yards of concrete. The 10 press units weighed 542 tons and had to be mounted on a deep steel and concrete footing, separated from the shell of the building by a two-inch cushion of cork, to keep the building’s walls from vibrating. A gigantic 5-by-7-foot air intake system was provided to capture the fine spray of ink tossed off by the presses. The building’s floor supported 500 pounds per square inch. Two vaults were constructed 11 feet below the warehouse to accommodate electric transformers, and two 5,000-gallon ink tanks, capable of off-loading a railroad tank car of ink, were also located below ground. A shaft was sunk 30 feet below ground to support a 4-ton capacity elevator.

The Times likened the building to the Great Pyramid of Egypt. However, instead of “a tomb for an individual mortal” the Press Building was declared “a monument for hundreds of thousands of readers – now living and yet unborn.” The building was designed by famed architect William B. Harvard and his associate Blanchard Jolly. Throughout the project, Hennessy never missed a construction schedule deadline.

In the 1970s, Hennessy began to specialize in electrical power substations, much of it for Florida Power. The company was purchased by Ken Hall in 1982. Hall was a seasonal resident of St. Petersburg from North Carolina. A significant project at that time was maintenance on the Crystal River Nuclear Plant. Another was renovation of St. Petersburg High School. In more recent times, projects have included the Belleair Country Club, the Jim and Heather Gils YMCA on 1st Avenue South, the Hazel Hough Wing of the Museum of Fine Arts, Spa Oceana at the Don CeSar Resort, YMCA of Greater St. Petersburg Childs Park Community Center, Stetson Law School renovations, the Pinellas County Public Safety Complex, Sundial renovations and additions, Ruth’s Chris Steak House, Sea Salt and Locale Market at Sundial, Shorecrest athletic facility, Florida Power Park at Tropicana Field, Jamestown Apartments, Raytheon Systems STAR Center, and the Sandpiper Clubhouse at Innisbrook.

In 1999, St. Petersburg native Bronson Alexander purchased the company from Ken Hall, and in 2017, Mark Stalker purchased the company from Bronson. Mark is also a native of St. Petersburg, born in St. Anthony’s, the hospital Hennessy built. Mark joined Hennessy in 2009 as vice president and became president in 2013. Mark says, “Both my dad and I were born in St. Pete, and I feel a personal obligation to keep the business going as a locally owned company. I feel more like a caretaker for the next generation than an owner.” People often tell Mark they once worked for Hennessy. The company has employed thousands of people over its long history, including Mark’s son.

The company is a past recipient of the Philanthropic Small Business of the Year Award. It may be that Hennessy’s community generosity is a reflection of its 100-year connection with St. Petersburg. As Mark Stalker observes, “It’s our town.”

Hennessy has enjoyed remarkable continuity over its 100 years. This is reflected in its largely family and local ownership, but also in the construction itself. Time and again, Hennessy has returned to a building it constructed years ago to undertake a renovation, addition, or replacement. Examples include St. Anthony’s Hospital, Museum of Fine Arts, and the History Museum. In the 1950s, Hennessy constructed St. Joseph’s Church Elementary School on 22nd Avenue South. About five years ago, Hennessy was engaged to do a renovation there and uncovered a long-forgotten time capsule testifying to Hennessy as the original builder.

Today, Hennessy has a staff of 35 and is engaged in some nine projects. Current projects include affordable housing, the Westminster retirement complex expansion at Bahama Shores, the St. Pete Beach Library, and renovation of the Mahaffey Theater. Soon, Hennessy will undertake the new gallery and visitor’s center at the History Museum. And to bring our history full circle, Hennessy Construction will be starting a renovation at St. Mary’s Church where it all began!