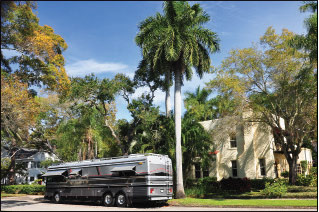 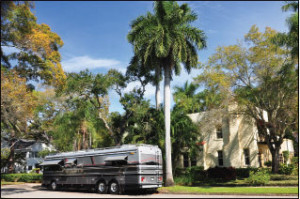 Robinson’s vintage restored bus is indeed a relic from the late 1980s. The bus itself was made in 1988, and has since been retrofitted inside to mirror a luxury late ’70s interior, complete with marble tile in the kitchen suite, vivid colors, double closets, a full bedroom with a queen-size bed, a full bathroom, and three AC/heating units.

“The inside looks like an old airplane,” Jerry explained. “Down the hall we have overhead compartments that look just like they do on a plane, and the control dials – there are about 50 – were made to look like airplane dials. It’s a very timeless look.”

Though reminiscent of a plane, the bus is really a house on wheels. Even the Robinsons agree with that assessment.

“When you live in an old house, and love it, this just seemed so similar [to my 1923 Old Northeast home]. I just love that historical feeling,” Jerry says. 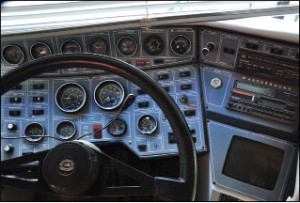 Jerry and MJ (Mary Jo) Robinson have been residents of the Old Northeast for almost twenty years. They are strategic branding experts and have helped many local and national companies hone their corporate brand for almost fifteen years. Robinson Brand Builders is only one of their local companies. They also own a cloud computing company. After years of long hours and the demands that come with successful entrepreneurship, the Robinsons are ready for travel – specifically, relaxing travel.

“The inside of the bus reminds me of a little New York apartment,” Jerry explains. “It’s a totally different way to travel and to stay places longer. When you compare the cost of a hotel, dining out, all the costs and resources of the bus are put into perspective and it actually comes down to much more affordable long trips.”

Those ‘resources’ include a 300-gallon gas tank – and the bus gets 6 miles per gallon. Jerry vehemently agreed that the lower cost of gas at present makes his travel plans a lot easier. The large water tank which holds 100 gallons and 12.5-watt generator gives the bus all the comfort and convenience of home.

Blue Bird’s branch of business called Cardinal Manufacturing created these home-like busses for some very famous clients, including former president Jimmy Carter and Johnny Cash. The first prototype was created in Fort Valley, Georgia in 1963. The prototype was based on Blue Bird’s famous school bus design, made entirely of steel, which the company had introduced in its school bus designs in 1937. (Busses back then were typically made of fiberglass.) After many years of production, Blue Bird/Cardinal Manufacturing divested its motorlodge business, which subsequently closed down in 2009. Blue Bird thrives today in its bread-and-butter business, the All-American school bus.

“It’s an interesting approach in getting different places and visiting people. We get to work in the morning (remotely) and play in the afternoon (exploring). We’ll get to see different parts of the country – and we also appreciate local places more, too. We just stayed in Fort DeSoto for two weeks – right in our backyard.”

While the bus itself is still rather new to the Robinsons (they’ve had it a little over a year), Jerry is not new to the world of the WanderLodge.

“I learned to drive in a VW camper,” Jerry says, laughing. “My parents were very into the RV scene. That camper was my first car. Everybody buys an RV for a different reason. For us, it’s a lifestyle thing. We want to merge work and travel in order to travel together for longer periods at a time. That being said, I’ve never had anything so big. I thought it would be a lot harder to drive!”

Good thing the bus isn’t hard to drive, as Jerry and MJ are ramping up their travel schedule and planning to attend more rallies like the most recent one in Fort Meade.

“These rallies are great,” Jerry says. “We find out about them on the WanderLodge forum and their blog. They’re spontaneous meet-ups. They’re timed with festivals and events sometimes. Picture thirty-five 80-foot busses all lined up. We meet up and have fun together at the festivals. The other reason we go is to get info from people who have had these old vintage busses longer than I have. I’m not mechanically inclined, so it’s great to hear from them what they do and what to expect. It’s a great community.”

Though the Blue Bird WanderLodges are now relics of a bygone time, this community of bus enthusiasts is still going strong, welcoming new members all the time.