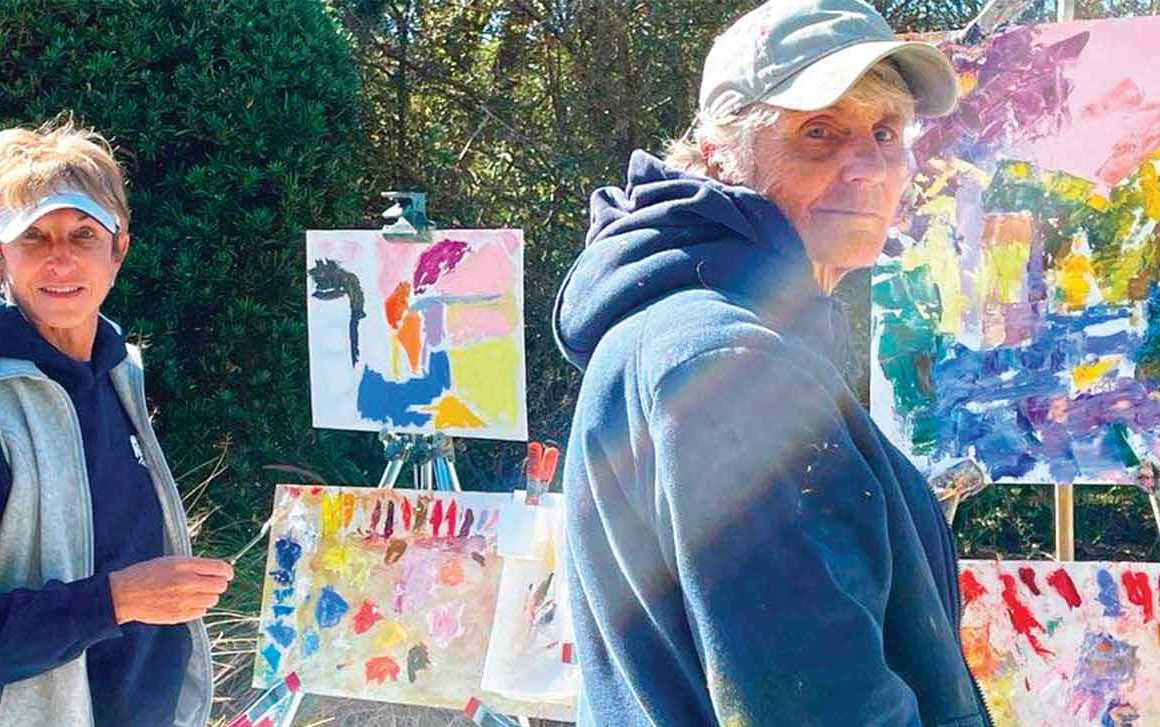 From December to May, it’s not uncommon to see Hilda Neily with her easel and palette of paints on the sidewalk of one of Crescent Heights brick-paved streets. She’s an impressionist plein air painter in the style set forth by master impressionist painters like Monet and Renoir. Plein air is a French term for ‘in the open air.’

In fact, Neily invites anyone who enjoys painting outdoors to come and join her. “The Impressionists often painted together,” she says. “You can learn from each other, see something different.”

Neily has the distinction of being one of the most prominent painters today in the Cape School of Art tradition. The historic outdoor art school was established in 1899 in Provincetown, MA by Charles Hawthorne, who also helped launch Provincetown’s renowned art colony. Neily studied there for 15 years under the direction of Henry Hensche, Hawthorne’s protégé.

The school is now a nonprofit and has the unique reputation of teaching artists and those who appreciate art how to ‘see’ color and light. People come from all over the world to develop their ability to perceive subtle nuances of color and light at different times of the day. Neily has an expert’s trained eye to notice the smallest changes created by the angle of the sun, the clouds, and the season, and how the color changes are reflected on buildings and in the landscape. “People don’t know this unless they are taught. Seeing color opens up a whole new dimension,” she explains. “The color changes every hour. Every condition is different – gray versus sunny; 9am versus 6pm.”

Neily grew up in Windsor, a small town in southeastern Vermont with a factory, a post office, and a train station – not the ideal setting for a budding artist. But Maxfield Parrish, the famous painter and illustrator known for his idealized landscapes, was a frequent visitor. Parrish lived nearby, just over the border in New Hampshire, and made frequent trips to the town. “He would just hang his pictures in the bank and the library for people to enjoy,” she says. “There were two huge paintings of his in the library and I would sit for hours looking at them. We didn’t have any art museums and we never went to the city, so the only paintings I saw growing up were his.”

The artist’s paintings and his use of light and color made an impression on her. From an early age, she knew she wanted  to be an artist, never anything else. “In high school, I just couldn’t do math, so they would say to me, ‘Hilda, just go to the art room.’” She went on to graduate from the Boston Art Institute and then studied at the Cape School of Art in Provincetown, where she continues to be one of the instructors.

Old Northeast resident Linda Welsh – a retired GTE/Verizon corporate executive and tech consultant – is one of Neily’s students. For the past few years, she’s been studying with her locally in St. Pete and going up to Provincetown for a few weeks at a time. “I’m learning to see the nuances of changes in color and to represent them in paint – it’s much harder than it sounds,” says Welsh.

Like Neily, Welsh has had a lifelong interest in art. She grew up in Chicago and attended the Young Artist Studios at the Art Institute of Chicago, and then the American Academy of Art College. But she had never considered art a career path, and transitioned to information technology, pursuing an MBA at Pepperdine University in California.

Fast-forward several decades, Welsh is now retired and can spend time doing what she enjoys most: painting, wildlife photography, and travel. She’s been all over the world, photographing polar bears in Churchill, Manitoba in northern Canada; going on safari in Kenya; and to Tahiti, Bali, India, Europe, Patagonia, and the Galapagos. For the winter solstice this year, she plans to travel to Antarctica and South Georgia in the Falkland Islands, where she’ll photograph the largest colony of emperor penguins in the world.

For Neily and her wife Cathy Shearer-Neily, travel primarily means going back and forth between Crescent Heights and their longtime home in Provincetown. Cathy is the executive director of the Hilda Neily Gallery in Provincetown which attracts an international clientele. Cathy manages all aspects of the business, and in her downtime, pursues her own art, which includes photography and beautiful traditional Chinese brush painting.

But in the winter, as soon as the cold, damp New England air starts to chill you to the bone, the two leave Provincetown for the Florida sunshine. The garage of their Crescent Heights home is filled with Neily’s canvases at various stages of completion. Toolboxes overflow with tubes of paint in every shade. There are also pallete knifes, including one Neily shows me that she designed herself from an old metal room key. In the Cape School of Art tradition, paint is applied to the canvas not with a brush, but a pallete knife.

“We are not drawing, we are painting,” Neily explains. “We apply one spot of color next to another spot of color until the whole painting is covered in blocks of color. You keep working until you get the color applied the way you like it. It’s not deliberate layering, it just builds up.”

One of the highlights of her career was painting in Monet’s studio and garden in Giverny, France. “I was able to spend the day inside the studio painting by myself,” she says. “There were paint boxes everywhere. It looked like it had been untouched since World War II. Then, after 6pm, after the tourists had gone, I was able to paint in the garden for as long as I wanted. It was a great experience, and I had a show from all the paintings I made that day. They all sold.”

When she’s not painting, Neily makes brightly painted little whimsical toys out of laser-cut pieces of wood that are hinged together with moveable gears, cranks, and ratchets. She explains they’re Automata mechanical toys. A whole section of her garage workshop is devoted to the tools she needs to create these tiny machines that turn and spin. They’re little marvels, set up on a table in the backyard garden in Crescent Heights for visitors to enjoy.

In a city full of artists, Hilda Neily, Linda Welsh, and Cathy Shearer-Neily add to the charm that makes St. Pete a special place to work, live and play.