Capturing the ’Burg in Acrylics 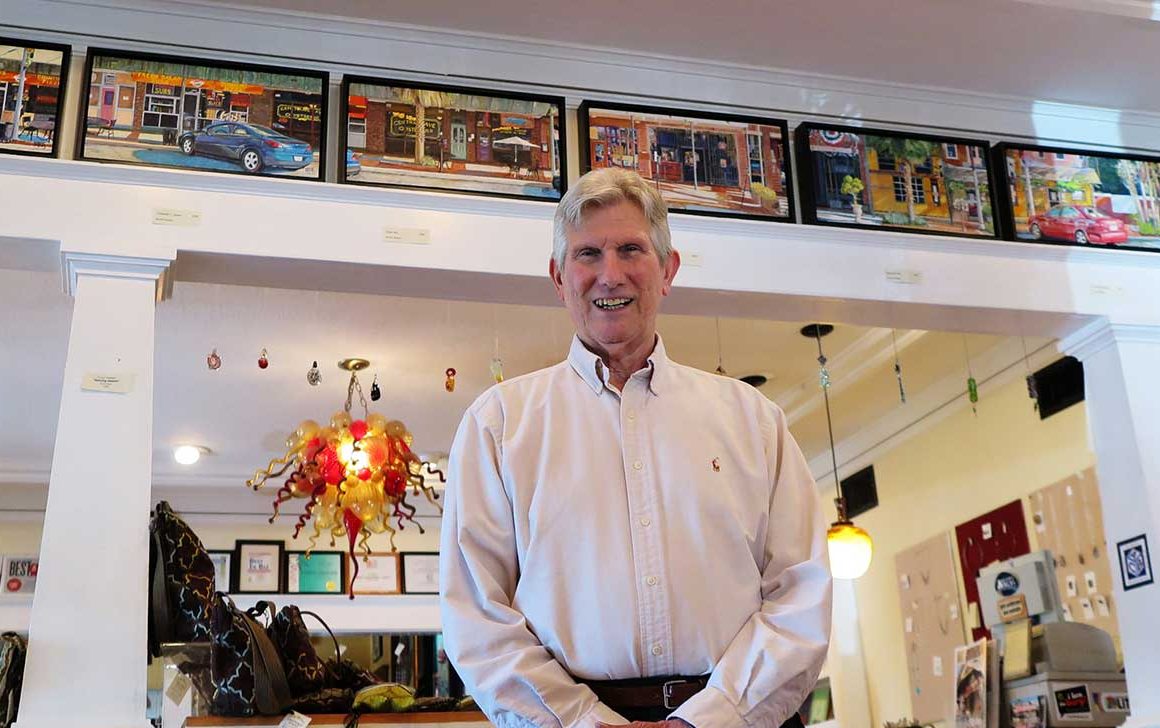 By day, the streets of the Old Northeast proudly exhibit homes in architectural styles ranging from Craftsman Bungalow to Queen Anne Victorian built during the construction boom of the early 1900s. Beautiful, historical, and stately, these homes are works of art themselves. Brick-paved roads, magnificent palms, and grandiose live oaks add to their charm. As the sun sets, and especially during the holidays, the neighborhood takes on a different persona, transforming into a magical Floridian-Winter Wonderland. People passing by can enjoy the elegant lights, classical bold red bows, and romantic luminaries that adorn the neighborhood from the streets. But once a year, during the annual Historic Old Northeast Neighborhood Association’s Candlelight Tour of Homes, the public is invited inside. Then it’s possible to catch a glimpse of the unique interiors while also learning about the history, restoration projects, and even a little about the owners of the eight selected homes. Last December, HONNA celebrated the 20th anniversary of the popular candlelight tours.

For the past four years, HONNA has commissioned local artist Robert Holmes to paint portraits of the homes to go into the tour’s holiday guide book. The acrylic paintings are then presented to the homeowners at the end of the evening after a dinner at the Westminster Palms. Since the homes are not all selected simultaneously, Robert explains, “Whenever they drop the flag, I start. HONNA picks the homes, lets us know where they are, and gives us the name and address.” He and his wife Margot then go to the address, take pictures, but do not meet the owners.

The process then begins. Robert lays the picture on his desk, makes a grid so he can enlarge the final product, doubling each side, quadrupling the area. “I draw it first with a pencil—the whole thing right down to every leaf and branch.” It takes him about a month to complete all the paintings, since he does not want to rush. He says he enjoys painting portraits of the HONNA Candlelight Tours because of the architectural uniqueness and historical significance of the homes.

Robert says he started painting at the age of three. “I learned how to draw on my mom’s chalkboard. I’ve always had a camera, ever since I was a little kid. My first camera was a twin-lens Yashica-D,” he recalls. Now he carries a little Sony digital camera, commenting, “Technology is amazing.” 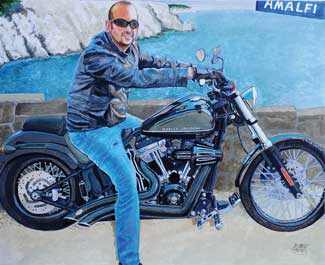 Everywhere he goes, Robert takes his camera and paints, whether it is in Washington, DC; Australia; or even Kisarazu, Japan; where he spent three formative years of his childhood. He remembers in great detail his years there, and shares his experiences with great enthusiasm. When asked what drew him to art, he responds, “Stamp collecting. I lived in Japan from the time I was seven to nine years old. I was a Cub Scout and Air Force brat. As a Cub Scout, you’re required to have avocations to earn merit badges. I went to a little mom-and-pop store not far from where I lived and used to admire the marbles they sold. They were made by hand, each with a little animal inside. I thought to myself, ‘Someone took a lot of time to make those marbles’, and so I began collecting them. But one day, I saw a little box with glassine envelopes containing beautiful stamps inside. I went home, and went through my father’s pockets to get as much money as I could find, and I took it back to them. I bought the whole box.” He still has the 40,000 stamps.

“It was the artwork that intrigued me,” says Robert. “It all started from somebody’s artwork. There wasn’t a photo reviewer back then, so they had to do this by hand on a steel or copper plate. They were just fabulous with lots of details.” He recalls how much art was part of everyday life in Japan. “There is no way you can miss all the calligraphy, designs, fabrics, and details.” 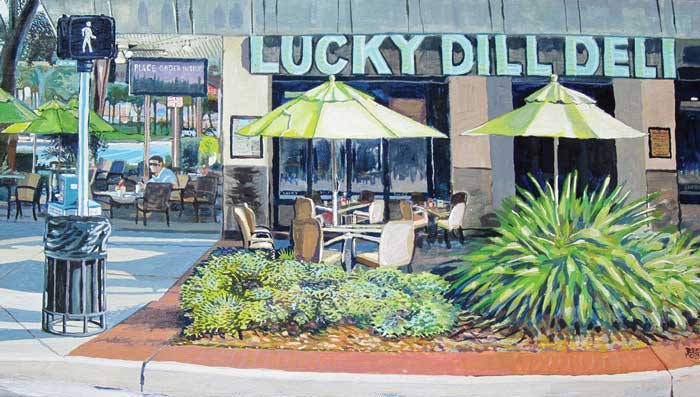 Margot adds, “No one taught him how to paint.” Robert admits that he doesn’t know how the process works either. “I have taken classes, but I already knew the mechanics,” he says. “I knew how to put colors together, and I could see ideas already. Usually, I can see something, and I just want to make it happen.”

Robert and Margot met while she was working at an attorney’s office in Rockville, MD. He was passing out brochures for his art show at the Rockville Civic Center. She attended the show and later commissioned him to do a painting of Myrtle Beach, NC, which still hangs in their condo today. 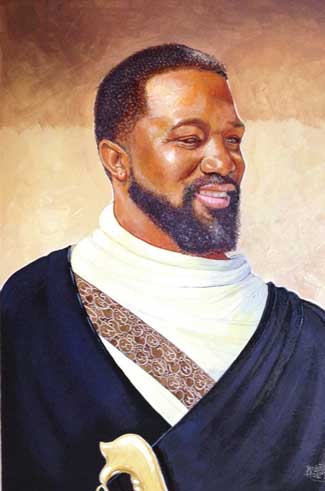 The couple decided to move from the DC area to Florida after Margot fell and broke her arm in a bad ice storm in 1996. After surgery and over a year of rehabilitation, they moved to St. Petersburg in 1999. Initially, they lived in north St. Pete, but Robert would do what he calls a ‘safari’ in downtown, checking out every street, every building, getting to know the city inside and out. He and Margot are now happy to live downtown. For six years, he had a studio above Florida CraftArt, but is now happy to be painting in the comfort of his own home. His themes are varied. “I just want to do something that someone hasn’t done before,” he says. “If it’s too repetitive, no one pays attention.”

So what kinds of paintings has he come up with? “One Sunday morning around 8am, when no one was parked on Central Avenue, I went around and took pictures of everything I saw between 2nd and 3rd Streets. I stood on the double yellow line in the middle of the street and took a picture of the Lucky Dill. Then I moved down 20 feet and took another picture. I took 20 pictures from Lucky Dill to Detroit Liquors.” Later, he sold many of his Central Avenue paintings at a show at Kahwa Coffee. The remaining paintings are at the Crafstman House.

All of the portraits that Robert paints are based on photographs that he takes. “As long as Robert takes the photo, he can paint it. If you just give him a picture, somehow, it’s not the same,” says Margot. Robert agrees. “My mind’s eye has to see it. I have to take the photo myself because then I take the picture the way I want to paint it.” Yet rarely does he know what the setting will be for any of the portraits that he paints. “Conjuring something from nothing…that’s the excitement of it. I can create something that never existed before and make it real.”

It’s not surprising that Robert’s favorite artist is Edward Hopper, a prominent ‘realist’ painter, who is known for his cityscapes and architectural paintings. Once, Robert painted a series of 40 pies for a show and donated half of the proceeds to an Alzheimer’s organization. He’s gone out to St. Pete Beach and painted a series of 25 hotels. They all sold. He also enjoys painting local restaurants. For the past six years, he’s been painting The Avenue’s Burger of the Month – that’s 72 burgers! He’s also painted portraits of the staff at Gratzzi Italian Grille, giving each a unique personality incorporating both imagination and individual experiences. Robert decided to make Casey, the owner, a prince, since it was Christmas and he was thinking about the Three Kings. He painted executive chef Tony Mangiafico on his motorcycle on the Amalfi Coast of Italy. 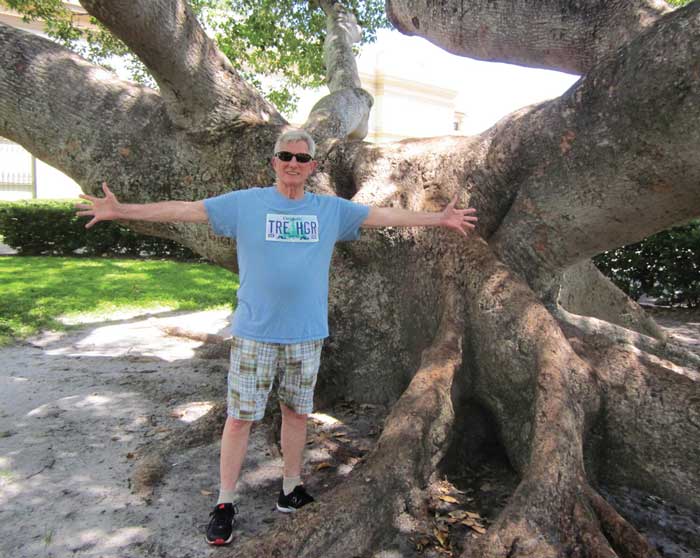 Robert and Margot Holmes are both retired. Robert says with a smile, “Every day is Friday.” He spends his retirement capturing the beauty, architecture, details, colors, and people of the Old Northeast and St. Petersburg in his paintings.