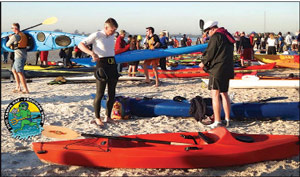 It was a chilly January morning in The Tampa Bay Metro area. The air temperature was about 54° as the sun was starting to rise over the Bay and the water temperature was just above 60°. Most people wouldn’t even dream of sticking a toe in the water, but on Gandy Beach, 150 men and women had donned wetsuits and were getting set to dive in for a very good cause! It was the 6th annual Tampa Bay Frogman Swim, a charity fundraising event that benefits The Navy SEAL Foundation. This charity has a four-star rating by Charity Navigator and has been certified by Charities of America as a “Best in America” Charity. The Navy SEAL Foundation supports SEALs and their families. 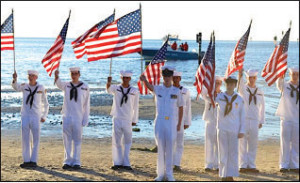 Honor Guard during the opening ceremony when they read the names of every SEAL killed since 9/11.

According to the Frogman web page, tampabayfrogman.com, this event began in 2010 when Commander Dan O’Shea, USNR, had an idea to turn an annual swim organized by Tampa Bay Watch into a fundraiser for a SEAL who had been injured in Afghanistan. After a successful event in which 40 swimmers completed the race and raised thousands of dollars for the SEAL, Rory O’Connor took over the direction of the event. He, along with Kurt Ott of Venetian Isles, son of SEAL Norm Ott; Doug Santo, a SEAL veteran; Terry Tomalin and several other volunteers organized a follow-up event in 2011. This race was also a success, this time benefitting The Navy SEAL Foundation. The event is a sanctioned event by the U.S. Masters Swimming and USA Swimming, and has grown each year both in participants and in funds raised. 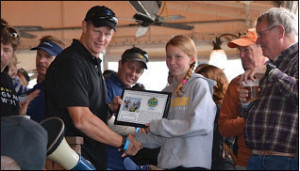 Commander Doolittle (SEAL) presenting Reagen Quilty with the “Spirit of the Naked Warrior” award. Naked refers to ‘without lifelines, using facemasks, and wearing only swim trunks and fins.’

Kurt Ott was attracted to the event because of his SEAL connection through his dad and also because he is an endurance athlete. In late 2009, he had heard about some SEALs putting a swim together. The first year he got involved by providing boat support for the swimmers. After that, he got together with the others and worked to make this an annual event. He said they cap the event at 175 swimmers in order to keep it safe and manageable. Now efforts focus on the fundraising portion of the event. They hope to continue increasing the amount of donations to give to the SEAL foundation each year. Kurt said there has been more than $1,000,000 raised over the course of the event so far! Raising the public awareness of the event will certainly help with this effort. He also said they are always looking for more local sponsorship. 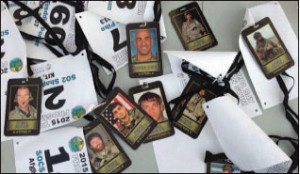 Jen Rhyner, a swim participant from, says the families of Special Ops members don’t know where their loved one is or when they will come home. She would know. Jen trained as an EOD technician candidate and was a rescue swimmer when health issues forced her to obtain a medical discharge in 2008. “The job can require the ultimate sacrifice, but it is worth it because it’s for the greater good and our country,” Jen says. “The Navy SEAL Foundation is a priceless community that understands and supports these families.” This was Jen’s first year as a participant in the swim. She was challenged to do the swim after last year’s event. She participated with friends who all work together at St. Pete Bicycle & Fitness, some as swimmers and some as kayakers. The swim is slated as a 3.1 mile open-water swim in the chilly bay waters from Gandy Beach to Picnic Island, but that doesn’t include adjustments for the current. The race can end up being a bit longer. The swimmers must have a kayaker as a partner to help them stay on course. She partnered with Tim Robinson and they developed a non-verbal communication plan that helped her stay on course. He had water and nutrition on board for her, which she credits for helping her to finish the swim. She drew her strength, she said, from seeing handicapped swimmers participating and from the fact that this was supporting such a great cause. Each participant was given a lanyard with a picture and information about a fallen SEAL. Jen’s lanyard SEAL was a 26-year-old who pulled a teammate out of the line of fire in 2006 and saved him by coming out of cover. 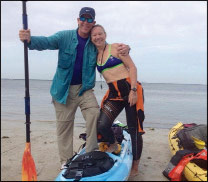 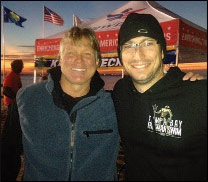 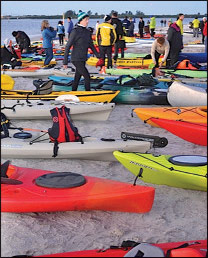 Getting ready for the race

Another swimmer at the event was Ken Bowen. Ken was living in Washington, D.C. on September 11, 2001, when the plane flew into the Pentagon building. That day and the devastation he saw closely affected him personally, so he put his new law career on hold and enlisted in the U.S. Coast Guard. In his service, he served and trained with some of the Special Ops community and grew to appreciate the extreme sacrifices they and their families make for our country. He first learned of the Frogman Swim after the 2010 event had already taken place. He worked as a volunteer for the next few events, and swam the event in 2014 for the first time. He did so with little training. He did finish the race but collapsed from hypothermia upon exiting the water. This year, knowing how quickly the coveted entry spots sell out, he set his alarm to remind him when registration opened. The entries sold out in 31 minutes! Battling a shoulder injury, he was not able to train as he wanted, but he was determined to finish. “I was totally prepared to swim combat side-stroke with my good arm if that’s what it took to finish.” He says, “ No way was I going to let down those who contributed on my behalf, nor the SEALs and their families who benefit from this event.” He chose a good friend, Jenna Shiver, as his paddler. Jenna is a former national champion professional boxer and he knew she had the athletic ability, physical strength, and mental toughness to handle the nasty conditions and help him safely make it across the bay. They also had hand signals and plans on how to handle rough conditions. “It’s a little nerve-wracking to look across that bay, and at that shipping channel and think to yourself, ‘I’m about to swim that.’ I grew up fishing those waters and have caught my fair share of sharks out there!” Ken said the water temperature drops 10° in the shipping channel, it’s very dark, and the current becomes stronger. He said, “Like most things in life, the real challenge in making that crossing is winning the battle that is played out in your own head.” He also reported that the currents were tricky this year, making it a struggle to stay on course. Several swimmers got washed off course, and some were unable to finish. Ken did finish despite his shoulder injury, but he was most proud of raising $3,200 this year. He was really moved by the post-race swim party, where he was able to meet and talk to several Gold Star Families. These families raised the heroes who serve a cause greater than themselves and pay the ultimate price for that cause. They are “the heroes who sacrificed everything for us,” Ken says. He brought five friends to the party and they all want to be involved next year. “I am committed to swimming this event every year as long as I am breathing.” 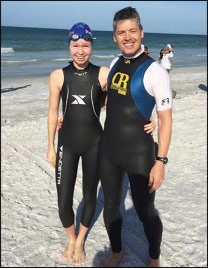 Old Northeast resident Chris Quilty is one of three who have participated in all 6 of the annual events. He was also attracted to the event because of the cause it supports. Chris discovered the race through the Retired Naval Association and Masters Swimming. He and his wife Karen both graduated from the Naval Academy and were Navy divers for 5 years. He said he saw this as a challenge because he did not see himself as a ‘cold water’ swimmer. He said Karen swam the first year but opted out after that, and in 2014 his daughter Reagan, a 7th grader at Shorecrest Preparatory School, joined him for the swim. At age 13, Reagan was the youngest to participate to that point. This year, Chris says, there was a 12-year-old who swam. “Reagan beats me at swimming, so I raise more funds than she does. It’s the only way I can beat her!” And he does a great job at raising funds; he has been one of the top fundraisers for all 6 years!

This year over $200,000 has already been raised and more donations are still coming in. If you would like to donate visit www.imathlete.com/donate. If you are interested in becoming a local sponsor please visit www.tampabayfrogman.com/sponsors