Christmas a Century Ago 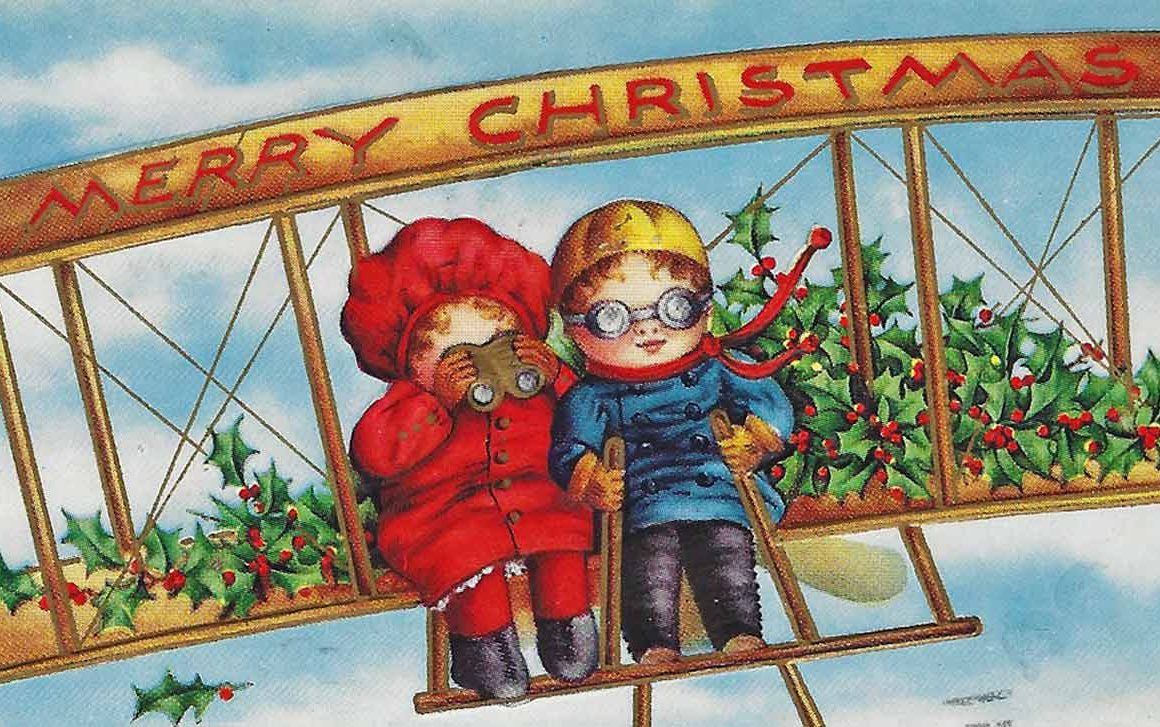 As the 2020 holiday season approaches, we turn back the clock to pay a visit to the Christmas season of 100 years ago. In 1920, the nation and St. Petersburg were still coping with the post-World War I depression, although St. Pete was seeing good signs of recovery. World War I had come to an end in late 1918 as had the devastating Spanish Flu. In November 1920, Republican Warren G. Harding had been elected president. However, as of Christmas, Democrat Woodrow Wilson was still serving. His term would not end until March 1921. 1920 was a “Dry” year, at least officially. The 18th Amendment to the Constitution prohibiting the manufacture or sale of “intoxicating liquors” took effect at the beginning of the year.

Also, in July 1919, women in St. Petersburg received the right to vote. It was not until 1920 that the U.S. Constitution was amended to give women that right nationally. On Christmas Day 1920, the St. Petersburg Times reported the gift of a memorial statue of suffrage pioneers Elizabeth Cady Stanton, Susan B. Anthony, and Lucretia Mott to the U.S. Capital. Scheduled Transcontinental Air Mail service between New York and San Francisco began on September 8, 1920, over a route laid out in July and August by war hero – and later Chairman of Eastern Airlines – Eddie Rickenbacker and record-setting aviator Bert Acosta.

At the local level, the famous Pheil Theater opened in February, 1919. This was the theater built by Mayor Pheil, the first passenger on the First Airline. The theater was distinctive as the projection room was in the back of the theater, rather than the front, to better contain fire in case of emergency. Also, 1920 saw the founding of the city’s first Rotary Club; development of the Snell Isle golf course, now the Vinoy Renaissance Golf Course; and the founding of the St. Petersburg Memorial Historical Society which shortly led to establishment of the St. Petersburg Museum of History. And it was about the year 1920 that Elder Jordan, Sr. undertook development of the African American residential and business district centered on 22nd Street South (popularly known as The Deuces), leading to Mercy Hospital, Jordon Elementary School, and Gibbs High School. 1920 also saw the election of Noel A. Mitchell as mayor, and the election of the first woman to the City Council, Virginia Burnside. On Christmas Day, Mayor Mitchell officiated at the opening of a new city aviation field and aviation school. The following year he was to have the task of managing the recovery of the last hurricane to directly hit the St. Petersburg area.

A look at the front page of the paper for Christmas Day 1920 also helps to set the context of the times. One article reported the Socialist Party condemning President Wilson for pardoning “two murders and a dealer in narcotics” but not freeing Socialist Party leader Eugene V. Debs. Debs had been incarcerated in 1919 for his criticism of the Wilson administration and opposition to the war. His sentence was later commuted by President Harding to take effect Christmas Day 1921. A second article is entitled “U.S. Gives Up San Domingo.” Santo Domingo had been occupied by the United States in 1916. And yet a third article entitled “12,000 Immigrants In Sight of U. S. Spend Xmas Aboard Ships” reported that the ships carrying the immigrants were backed up in the New York City harbor due to an influx of luxury liners arriving for the holidays. “Tugs and barges today carried to the ships [Christmas] trees and other green decorations which would be the envy of many celebrants of the day ashore. Stowed among the trunks and branches of the trees were bales and baskets filled with Christmas goodies, with toys for the little folk… To those on board the ships held by law from friends ashore, went boat after boat carrying those friends, who encircled the ships singing.” In 1920, Jewish religious holidays such as Hanukkah were privately observed in St. Petersburg, but there were no Jewish synagogues. Only nine Jewish families resided in the city at the time.

Perhaps Christmas 1920’s best gift to St. Petersburg was news about the improving local economy. A December 26th article caption reads “St. Petersburg Population Increases to a Total of 36,000.” That was not just the resident population, but also included tourists who visited the city throughout the past year. The resident population of St. Petersburg in 1920 was 14,237. So the number of tourists was almost twice as much. The tourist economy was coming back. In fact the hotels were becoming so full that Mayor Mitchell established a Tent City for the overflow or those who could not afford the hotel accommodations available. They were derisively referred to as the “tin can tourists” as many cooked meals in tin cans over open fires.

In addition to the Chamber’s tourist registry, there were also anecdotal observations based on hotel activity. Another caption reads “Hotels Report Big Christmas.” This article noted the winter tourist season was 30 days ahead of schedule. Hotel dining rooms did not usually see big crowds until mid-January. But that year, Christmas diners – mostly tourists – were abundant. Some 179 people were served dinner at the Detroit Hotel (still on the 200 block of Central Avenue, a major city landmark). “The dining room was attractive in special holiday trimmings and the service was handled with smoothness and dispatch of the mid-season rush.” The owner, Frank Fortune Pulver, later to become mayor of the city, was presented by his chef with a big Christmas cake. Across the top was the Rotary slogan: “He profits most who serves best.” Pulver was a charter member of the new Rotary Club.

An array of hotels published their Christmas menus. The up-scale Huntington Hotel offered a menu of 16 items including Chicken Okra, Louisiana; Mousseline of Native Trout, Victoria; and Larded Loin of Beef, Grand Veneur. Even cafeterias published Christmas banquets. The Wentworth Cafeteria located at the corner of First Avenue and Fifth Street South invited the public to “join the throng of discriminating people who will eat their turkey dinner” at their place of business. At other eateries, Christmas dinners were offered for as little as 75 cents a plate. “Regular dinners” were still available, though, for 60 cents a plate.

How well these dinners actually came off is a question. In my last article I featured early St. Petersburg Mayor Abe Pheil who brought manufactured gas to the city in 1913. As the saying goes, “No good deed goes unpunished.” On December 26th the Times reported “Christmas Roasts Imperiled When Gas Pressure Goes Down.” With all the cooking being done, “gas was so low that a flame could hardly be kept up.” The situation was finally remedied about 1pm. However, the gas crisis brought about postponement of the Sunshine Horseshoe and Quoit Club final match. Club secretary McClure commented, “The failure of the municipal gas company to supply gas in large enough quantities to cook Christmas turkeys, chickens, and ducks caused the barnyard golfers [as the horseshoe players were called] to have late dinners, and after eating the partly cooked fowls were unable to enter the match because of indigestion.”

In addition to booming hotels, restaurants, and cafeterias there was of course Christmas shopping. “At the five-and-ten cent stores, the aisle ways were packed with surging humanity while clerks in the dry goods and hardware shops were kept moving at high speed by late purchasers.” “Malty Christmas” and “Hoppy New Year” greetings were playfully exchanged by a few. The paper reported that because of Prohibition these were now things of the past, but spirits could still be obtained in St. Pete by those in the know. (Al Capone’s bootleg partner Johnny Torrio was to make St. Pete his winter home starting a few years later.)

On Christmas Eve Day, in a holiday editorial likely written by editor William L. Straub, the St. Petersburg Times ushered in the 1920 Christmas under the heading “Christmas As Usual:”

“Christmas is here again. It has a way of coming back and of joining battle with the world’s doubts and discouragements and selfishness and evil. It has a way, too, of winning the fight always with its laughter, its warm generosity, its spirit of love and kindliness and childlike simplicity.

“Thus, in spite of unemployment – neither so widespread nor so appalling as in other periods of readjustment – and in spite of shortages and profiteers and politics, most of the civilized world which a short time ago was plunged in confusion and gloom finds itself warming up with Christmas spirit, and the words ‘Merry Christmas’ are spoken with the same old joyous thrill as before.

“The reason for the invincibility of Christmas is its close relationship with children. It is always their day of days, so happy, so full of possibilities for love and service that even the grouchy old Scrooges, when let into its great secrets, are transformed into the most irresistible of holiday joy-makers.

On Christmas Day, the Times did not publish an editorial. Likely Straub was home with his wife and daughter, perhaps at his beach cottage, Loafer Lodge at Pass-a-Grille. Rather, the paper republished Francis Church’s 1897 public letter to Virginia O’Hanlon, with the famous line, “Yes, Virginia, there is a Santa Claus.” “The most real things in the world are those that neither children nor men can see.”

This year’s holiday celebrations will be somewhat different because the pandemic is yet with us. But, we will still be thankful for the inspiration of the Christmas story, the delight of little children, and the merriment of friends.