May 14, 2015by adminNEJNo CommentsAll, Cover Story 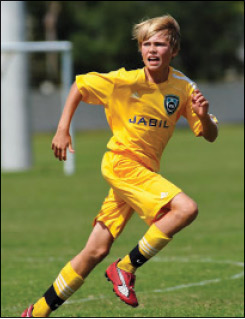 We’ve all heard the phrase “life is short; live today as if it is your last day; dance as if no one is watching.” We know we may eventually succumb to sickness or disease. Many of us are aware of the numerous types of illnesses and diseases in our world. At any time, on any given day, and at any given age, unfortunately any of us could be diagnosed with a disease. This happened to Cole.

Cole Eicher started vomiting during the mornings of his Thanksgiving break in 2013. In January of 2014 during a soccer tournament, the same symptoms returned and Cole told his dad he did not feel well enough to continue to play. Cole’s parents, Scott and Laura Eicher, immediately took him to his pediatrician. The doctor reviewed Cole’s blood work which came back normal, and they suspected adolescent migraines. In addition, the Eichers visited the ophthalmologist and it was revealed Cole had a weak muscle in one of his eye’s, possibly causing the migraine headaches. Cole soon began to experience sight issues; during several soccer games, he began seeing double vision (two soccer balls instead of one). Laura, Scott and Cole knew something was wrong and they were glad they were finally going to get some answers and help Cole feel better.

On February 3, 2014, Cole Eicher (age 12) was admitted to All Children’s Hospital Johns Hopkins Medicine for an MRI of his brain. 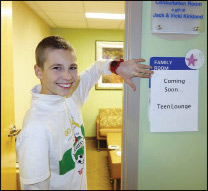 Teen Room created by Cole at All Children’s Hospital

Cole was a normal kid, attending 6th grade at Grace Lutheran School in St. Pete. He was involved in many activities at school and in the community. Cole was inspired by his mother and became involved in acting and modeling. Cole is represented by various agencies in Florida. On any given Sunday, you may have seen Cole’s photo in the store advertisements. Cole was often hired for Bealls children’s clothing print ads. In addition, nearly every weekend, you could find Cole at Puryer Park playing soccer with the Northeast Raiders; he has been playing since he was 7 years old. All this changed on February 3, 2014.

After several hours of waiting at All Children’s Hospital, Laura was approached by a team of medical personnel. Laura will never forget the feeling of despair when she received the news; Cole had a malignant brain tumor! The diagnosis of medulloblastoma was delivered shortly thereafter by neurosurgeon Carolyn Carey, M.D. Cole’s diagnosis of medulloblastoma is the most common malignant brain tumor in children. One out of 285 children is diagnosed with a cancer. February 3, 2014 is a Monday the Eicher family will never forget; Cole was scheduled for brain surgery two days later.

Do you know what you will be doing in September of 2015? Supporters of Cole Eicher will be celebrating “Go Gold” since September is Children’s Cancer month. We hope we can count on your children’s school and your place of business to select a day within the month of September to wear a gold ribbon to raise awareness for Children’s Cancer. Please refer to www.facebook.com/GoGoldForChildhoodCancerAwareness for more information. 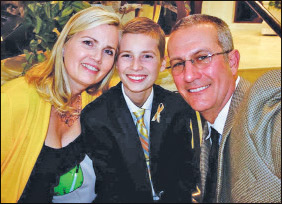 Cole and his parents Scott and Laura Eicher

When Laura and Cole were asked how they coped with this shocking news, both consistently responded “it was our faith and support that helped us through it all.” It was Cole’s friends and the staff at Grace Lutheran School that created the numerous rubber wrist bands “COLE STRONG – Jeremiah 29:11.” They were able to raise approximately $5,400 for Cole after he underwent surgery in February 2014, which was donated to All Children’s.

Cole’s brain surgery was performed by two pediatric neurosurgeons, Dr. Carolyn Carey and Dr. Luis Rodriguez at All Children’s. The surgery lasted five hours and was successful. The surgeons were able to remove the majority of the tumor. In addition, Cole’s post-surgical complications were minimal.

Our community is fortunate to have the pediatric specialists and dedicated staff at All Children’s Hospital located in our backyard. There is significant skill and precision required for successful brain surgery. As a result of brain surgery, you often hear of patients waking up and that no longer have the use of sections of their body and/or speaking clearly (things we take for granted). The Eicher’s would like to express their thanks and gratitude to all the medical personnel at All Children’s who cared for Cole. 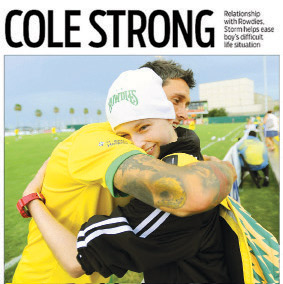 “Cole’s prospects are excellent. He has been cared for at one of the select few hospitals in the country that treats medulloblastoma utilizing a complex procedure involving high-dose chemotherapy and autologous stem-cell rescue and transplant,” as explained by Stacie Stapleton, M.D., director of Pediatric Neuro-Oncology at All Children’s Hospital.

There is strong hope Cole will return to his cancer-free way of life. Cole is like any other child; he can’t wait to play soccer again! Cole’s last MRI results showed no viable disease (return of cancer cells), although the Eicher’s understand there are risks until he remains cancer free for at least five years.

When I asked Cole about the positive aspects of his diagnosis and his battle with cancer, he mentioned he realized how lucky he was to have his strong support system. Cole noticed other young cancer patients in the hospital sitting in their rooms with minimal visitors and socialization. He realized why the teenagers were bitter and did not socialize with other patients. Their friends were going to their high school prom while they were spending each day looking at the same 4 walls in their hospital room. He said, “I am so lucky I had this diagnosis before I was a teenager.” As a result of his experience, Cole recalled a room on the cancer floor which was not being used very often, and inquired if he could raise funds to turn it into a Teen Room. This was the start of Cole’s fundraiser to help other cancer patients have a better experience in the hospital when fighting for their life. 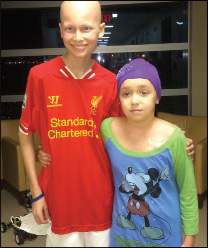 Cole with his friend Devyn Eich

As we often question, what is our purpose in life? Why we are here on this amazing planet, and what shall we leave behind for the next generation before we enter the gates of heaven? For Cole, I believe, he has figured this out and is willing to dedicate his life by helping other children and their battle with cancer.

If you wish to become a Cole supporter there are several opportunities to do so. Your school can think of fun innovative ideas to raise funds. A recent example, LCC Day School in NE St. Petersburg hosted a dance marathon in March to support childhood cancer care. They raised over $15,000 for All Children’s Hospital. The students in both the elementary and middle school had fun while learning about children’s cancer and experienced the feeling of giving back to others in need!

The American Cancer Society Relay for Life at Carillon is Friday May 8, 2015. www.relayforlife.org/carillonfl. In addition, two St. Petersburg High School international baccalaureate students are chairing Fore the Kids, a golf benefit in honor of Cole on Saturday, October 10, 2015 at Feather Sound Country Club. All proceeds will go to a 501c3 organization for children’s cancer research. Please contact George Scribano at 727-218-8693 or Blitz5454@gmail.com, or Trey Walker at 727-504-4941 or Thomas.g.Walker22@gmail.com for information on how you can become a sponsor, golfer, or volunteer.

Cole respectfully requests everyone’s involvement and wants you to know even the smallest donations can make a difference. He is living proof that every dollar, volunteer, and supporter makes a significant difference. Cole encourages all of us to give what we can to make a difference and help save lives. Please help Cole get his wish and Go Gold by wearing your gold ribbon in September! Together, we can beat Childhood Cancer!