May 20, 2021by Will MichaelsNo CommentsAll, Cover Story 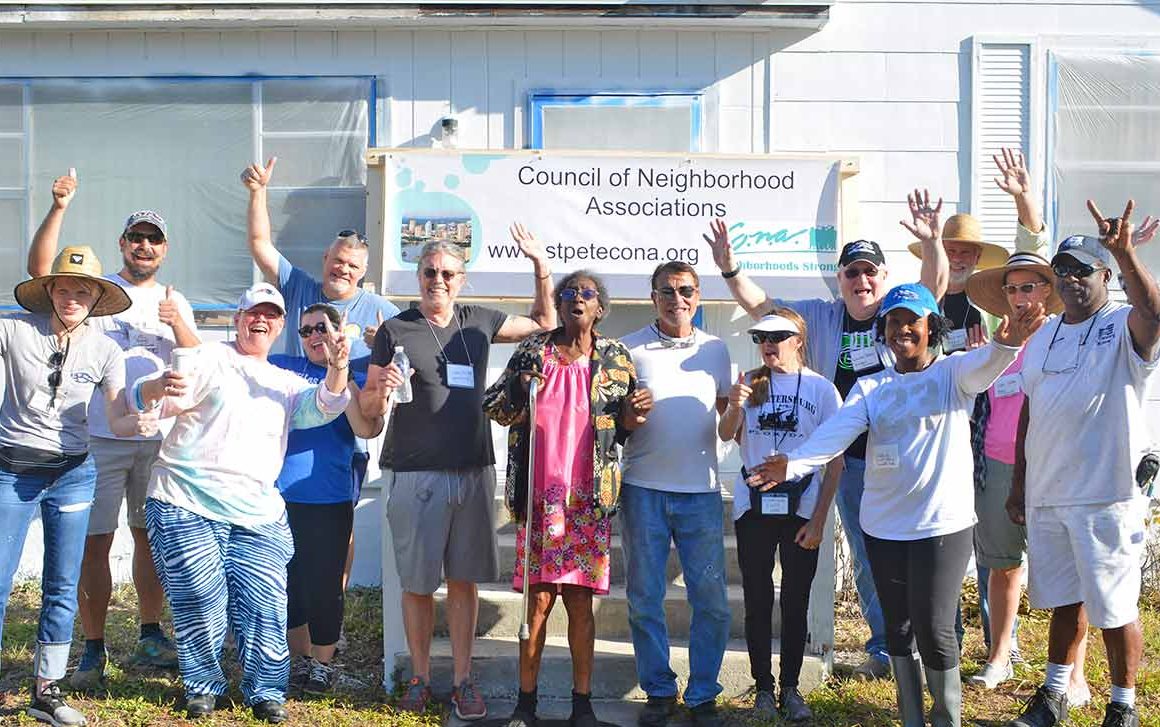 There are a variety of interest groups in our city. These include the St. Petersburg Area Chamber of Commerce, St. Petersburg Downtown Partnership, Pinellas Realtor Organization, Sierra Club, NAACP, Waterfront Parks Foundation and Preserve the ’Burg. Another important group is the Council of Neighborhood Associations, commonly known by its acronym ‘CONA.’

CONA’s mission is “to maintain its stature as a leading community organization for building a safe, high quality, and seamless city in order to meet the current and future needs of our diverse community. The vital role CONA plays in strengthening and advocating for neighborhoods through our many initiatives and activities contributes to a city of neighborhoods offering quality of life, and embracing mutual respect and appreciation among all people.”

Unlike most other interest organizations, CONA is an entirely volunteer organization operating without paid staff. Membership dues are $45 a year.

Tom Lally is CONA’s new president. Tom is a familiar face about town, giving back to the city he loves. He has served as a board member of the Greater Pinellas Point Civic Association, membership chair of CONA, member of the mayor’s Bicycle and Pedestrian and Complete Streets Committees, and member of the Chamber of Commerce Sustainability Committee.

By profession Tom is a mechanical engineer. He retired in 2012, but over the course of his career, he worked for Republic Aviation, Grumman, and the Pall Corporation. While at Grumman, he was involved with construction of the Lunar Module and met with the three astronauts from Apollo 13 (Jim Lovell, Jack Swigert and Fred Haise). The Lunar Module was critical to bringing the astronauts back to earth after failure of an oxygen tank in the larger Service Module.

Tom hopes to apply his skills as an engineer to strengthen CONA organizationally as it continues to play a vital role in St. Petersburg’s civic life for years to come. This involves further development of organizational systems, including a succession plan for future officers and committee chairs. His goal is to reinforce CONA as a ‘bottoms-up’ organization with the organization’s leadership attending to the special needs of its member neighborhood associations.

Tom is also committed to advancing CONA’s advocacy mission regarding city needs and issues that are common to neighborhoods throughout the city. He wants to ensure that CONA is “in the forefront of initiatives to further promote diversity and improved race relations” in our city. Recently, he established a new special CONA committee addressing the pending Vision2050 Plan and proposal for ‘Community Benefit Agreements.’  He would like to see the Diversity and Inclusion Committee transition from being a ‘special’ committee to a standing committee. In addition, he is concerned that “protecting the character and viability of neighborhoods receives equal priority with managed growth.”

One way of helping assure this is through establishment of a city policy for Community Benefit Agreements (CBA), which is now pending before the City Council. New developments can impact neighborhoods both positively and negatively. CBAs allow neighborhoods to negotiate with developers to mitigate adverse effects that may be caused by development, to maintain community character and to address such neighborhood needs as affordable housing, jobs, child care, and recreation.  Additionally, CONA plans to weigh in on the Tropicana Redevelopment plan regarding history, housing, and parks.

One of CONA’s major activities has been its annual Leadership Program. Over the years, scores of neighborhood residents have been informed about local civic institutions and programs and learned new leadership skills through this program. When the chair of the Leadership Program was unable to continue this year, Tom stepped up to run the program in addition to serving as CONA president. He enjoyed taking on this task, as through the Leadership Program he hopes “to bring new people into CONA.”

Over the years, the leadership team of CONA and its member organizations have gone on to serve on key City Commissions and the City Council. Council Member Lisa Wheeler-Bowman is a former CONA president and Council Member Darden Rice served as CONA vice president. In addition, former council member Karl Nurse served as CONA president, and current council members Robert Blackmon, Brandi Gabbard, Ed Montanari, and Gina Driscoll all acknowledge their affiliations with their neighborhood associations and CONA.