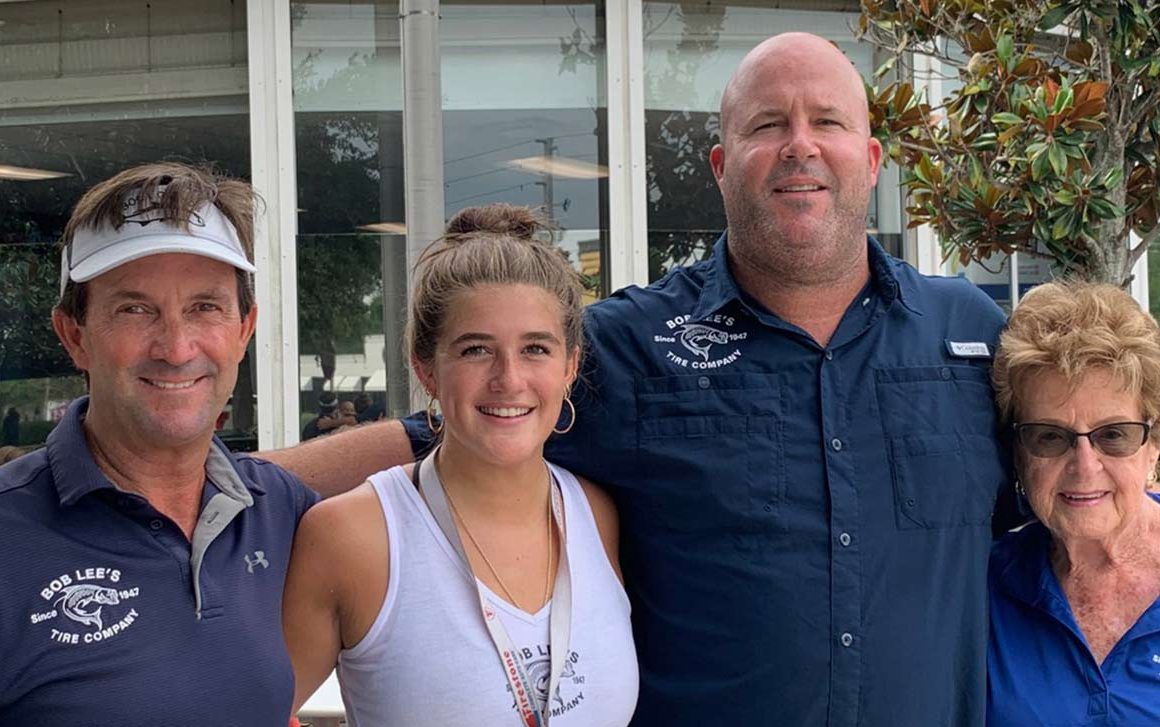 On June 23, 1963, John F. Kennedy was president, gas was 22 cents a gallon, and oil was 25 cents a can with a 2-cent rebate. It’s also the day that Dotty Stewart started her job at Bob Lee’s Tire Company on 4th Street North. This past June, Dotty celebrated her 57th consecutive year as a bookkeeper and accountant for the family-owned tire-and-auto-repair center.

“I came in for an interview and never left,” says Dotty. “Today, nobody stays at their job this long, but I look forward to every day. It’s really been an awesome 57 years.”

Now 82, Dotty still comes to work every day at 8am. Asked if she was tired of working so many years in the same place, Dotty replies, “I will be here until they tell me not to come anymore. They sent me home for a while during the COVID-19 pandemic, but I missed the people and my job. I’m healthy and enjoy what I do – and after 57 years I am fortunate to be able to handle my assignments very well.”

Dotty has seen a lot of changes over the years. She recalls that one of her jobs in the 1960’s was to keep a close watch on the gas station attendants. “Every attendant needed to clean the windshield, check the fluids, pump the gas, and even take a whisk broom to the floor on both the driver’s side and passenger side. This was before there were vacuums,” says Dotty. “I had a clipboard and my job was to mark off on a checklist to make sure that sure every one of Bob Lee’s priorities were completed.”

She also remembers the energy crisis of the 1970s when gasoline was in short supply and cars would line up in the street waiting for their turn at the pumps. “One of the popular local radio stations sent over a radio personality dressed in a gorilla outfit and he would be out there waving cars in and out of the gas station,” says Dotty. “It was a crazy time.”

In the 1980s, computers revolutionized the business, transforming the accounting system from the traditional method of tracking inventory on index cards. “Everything was done by hand back then,” says Dotty.

But one part of the business hasn’t changed, she says. It’s the camaraderie of the Bob Lee team, which includes both her fellow employees and the owners. “This is a family operation and I’ve been treated like part of the family since the beginning,” she says. “Not too many businesses treat their people like we do. I think that’s why the company has been so successful. They are very kind and caring people.”

Robert E. ‘Bob’ Lee II founded the original tire-and-auto- repair business in 1946 when “St. Pete was a sleepy little town and 4th Street was a brick road with a trolley car running down the center lane.” Over the years, the business grew, but today it continues to be family owned. Dotty now works with the 4th generation of the family, which includes Bob Lee III, Todd Murrian (Bob Lee III’s stepson), and Bob Lee IV. Todd’s daughters Kennedy and Madison also work there after school pumping gas and helping out where needed.

The oldest of seven children, Dotty is originally from Rockaway Beach, Long Island, and moved to Florida in 1948 when she was 10. “We moved to South Miami and my father opened an Italian restaurant. Since we’re Irish, I couldn’t conceive why Daddy had an Italian restaurant, but he did,” Dotty says with a laugh.

A couple years later, the family moved again, this time to St. Petersburg. This was before the Sunshine Skyway Bridge, and Dotty recalls taking the ferry that connected St. Pete and Pinellas County with Bradenton and Manatee County. “What I remember is the water was rough and I felt seasick,” she says.

St. Pete was very different back then, with a much simpler lifestyle and certainly less development. Dotty lived in various beach communities before her family bought property in Pasadena. The only business in the area at the time was Ted Peters, she says. Much of the area was still swampy. “Dad bought an old army barracks and had the building moved to Pasadena Avenue,” says Dotty. “We ran a fruit stand. That’s how he supported all of us.”

Dotty graduated from St. Paul’s High School and went to business school in South Carolina, before returning to St. Pete to raise a family and work at Bob Lee’s. She continues to be close to her siblings and her children, four grandchildren, and four great-grandchildren.

“Dotty has been our rock for 57 years,” says Bob Lee’s General Manager Todd Murrian. She knows our history and our family and she is a pleasure to be around every day.”