There are remarkable people in St. Petersburg, and one of them is Dr. Anna Loyd. Not only is she multi-talented with a wide range of achievements, she is a world traveler, physician, athlete, and humanitarian. She also speaks four languages.

Anna was born in Oklahoma, where her father was an emergency-room doctor. When she was nine, the family moved to Belgium so her dad could study in a one-year tropical medicine program. He had a deep desire to bring healing to people in impoverished areas of Africa, and when his program was completed, the family moved to Zaire in Central Africa. But there was political turmoil at the time under then-president Mobuto. The family was forced to flee, returning to Belgium for another year until it was safe to return to Africa and her dad’s medical missions.

“My best memories from my childhood come from watching my father work in the clinic,” says Anna. “He would take my brothers and me with him, and I watched as he worked with people. His interactions with them and the way he made a difference for the community were amazing. Compared to my life in America, where everything was, and is, so busy, I found that I could spend quality time with my father there.” 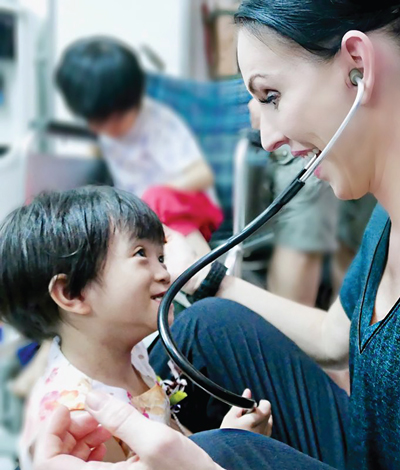 Dr. Anna Loyd with a child in Vietnam

During one of these trips, Anna also had a revelation. “I remember being 11 years old and realizing that I was such a brat. Before we moved to Africa, I was concerned with what I wore, wearing just the right hair ribbon, if I was popular, what I ate. In Africa, I saw people who had no money for clothes or food. I learned that my attitude was not a good one, and I worked to change that. I wanted to be more compassionate to others.”

When she was 15, the family moved back to the US, and she developed a passion for sports. At one point, she was on the Olympic Development Team for women’s soccer. She learned to scuba dive, snowboard, and even skydive. Later, she practiced taekwondo during her medical-residency training.

“I wouldn’t say that I’m competitive in most things… except for sports,” says Anna. “I get a little nutty with those. I was training to do a professional fight in taekwondo, but tore a muscle in my knee, so ended up not doing that. My time in extreme sports eventually left me in a wheelchair with pins and screws in both of my feet. Now, I just work out, or go sledding and skiing with my nieces and nephew when I visit up north.”

Her father has continued to be a lasting legacy in her life. “We’re cut from the same cloth,” she explains, and he inspired her to go into emergency medicine as a career. She received her medical degree from Oklahoma State University College of Osteopathic Medicine, but a dislike of cold weather brought her south.

“There were a few things that helped me in my decision. The first is that I hate cold weather,” she laughs. “Also, I studied oceanography and photography. I had come to West Palm Beach to do some scuba diving and I loved the area. I checked out residencies and the University of South Florida had a program that I was drawn to. I ended up enrolling in it, and did my medical residency with All Children’s and Tampa General Hospital.” 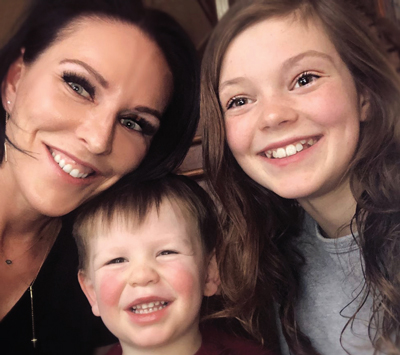 Loyd with her nephew and niece

After graduation, she went back north to work with her father for four years. The two shared their passion for emergency room medicine, though he worked with adults and she specialized in children. However, her love for St. Petersburg brought her back to the area. She currently works in the emergency department at AdventHealth Hospital in Tampa, a position she says gives her a “real sense of purpose.” Her medical practice is not limited to the emergency room. She continues to pursue medical missions in countries around the world. In January, she was in Vietnam working in orphanages.

Not surprising, given her childhood, travel is always on the top of her list. Anna says she loves visiting new countries every year. So far, her favorite destinations have included the Galapagos Islands and Germany, as well as scuba diving in Belize. In April, she’s going to France to attend a friend’s wedding. After that, she’s not sure just yet.

As if she’s not busy enough, two years ago, Anna launched Moxy Medical clinic, a medical skin-care clinic downtown. “When I first returned to America as a teenager, I had terrible cystic acne. I was working on myself to be a good person, but I found myself bullied really badly,” says Anna. “I finally got the acne properly treated, but I didn’t want anyone else to go through this. I know what it’s like to be insecure, and I want to help give people confidence.”

With so much going on, Anna’s days are long. She works in the Tampa ER until 3am, grabs a few hours of sleep, and then meets with medical-skin-care clients during the day. When she’s home, she spends time with her two dogs, Yogi Bear and Red. For her future plans, she is working on remodeling a house in the area to create a suitable home for fostering children and, possibly she muses, “to adopt.”

It is impossible not to ask a woman with such drive and energy about her life philosophy. “I meet these people that are so unhappy every day,” says Anna. “I love what I do and have such a sense of purpose. Just do what you love! Before you know it, you will blink and your life will be over.”