May 24, 2016by adminNEJNo CommentsAll, Miscellaneous

In a world where it seems that obtaining things is most important, it is always reassuring to hear about someone doing something selfless for others. This is especially true when the person is a 13-year-old 8th grader! Meira Kowalski is a student at Shorecrest Preparatory School in Northeast St Petersburg and what she is doing is selfless and amazing.

Meira told me that she has always been drawn to charity work. In fact, on her 10th birthday, in lieu of gifts for herself, she raised money for Give Kids the World, a resort in Kissimmee (www.gktw.org) which hosts the families of children with life-threatening illnesses from around the world. So how did a girl from St Petersburg, Florida get involved with The Lost Boys of Sudan? 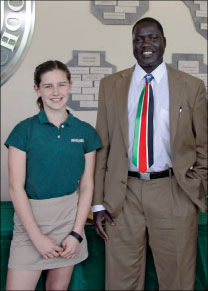 Last Autumn, as Meira prepared a project for National History Day, she learned about the Lost Boys of Sudan. She delved deeper and is quite knowledgeable on the subject. She told me that during the civil war in Sudan, 26,000 boys were left abandoned and orphaned due to fighting between the North and South. These boys walked to Ethiopia, and on the way many died either from being killed by animals, dehydration, starvation, or were executed by the warring parties. They lived in a refugee camp for 4-5 years until Ethiopia came under communist rule. The boys were then forced to leave and headed to Kenya. Only 10,000 boys reached Kenya. Approximately 3,500 boys were taken to the United States to start a new life.  Many of the boys were over 18 and so were not eligible for foster care. They were grouped together in apartments, and worked hard at their jobs and getting a higher education.  Fifty of those boys came to New Port Richey and ‘Joseph’ is one of them. Meira interviewed Joseph Deng for her history project and learned that he collected medicine to ship back to the boys in Africa.

“Joseph feels obligated to help those who were not as fortunate as he was” in coming to the United States to be cared for and educated, Meira told me. “Joseph pays to ship this medicine over himself and it’s quite costly.” She says it costs him $150 to ship packages up to 50 pounds, and $200 for larger packages. She learned that simple over-the-counter medicine which we have in abundance is not available to these boys. Simple illnesses like diarrhea or fevers can cause death because they are malnourished and dehydrated.

Meira was so moved by what she learned for her National History Day project that she wanted to do more.  Shorecrest Preparatory School eighth-graders have what is called a Passion Project. This project is individually determined by the student and their advisor, and it allows them to do something they have always wanted to do, but would most likely never do on their own.  Meira decided her project would be to assist Joseph in helping the Lost Boys. 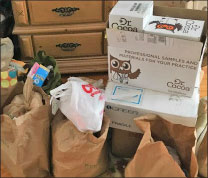 Medications Meira Kowalski has collected for the Lost Boys

Meira decided to collect over-the-counter medications which Joseph could bring to the Lost Boys on his trip planned in June. She set out bins at Shorecrest and set up a publicity campaign. She was very successful, collecting over 150 pounds of medications. She collected pain relievers, antipyretics and Imodium, as well as Band-Aids. She even received samples donated from physician’s offices. But Meira wanted to do more. Knowing how expensive it was for Joseph to ship medications, she decided to raise money to help him offset those costs. She set up a GoFundMe page and, at the time of this writing, has raised $2500! You can join Meira at www.gofundme.com/wzjqunjg if you would like to contribute funds.

Meira is winding down her medication collections at Shorecrest, but she plans to continue collecting them at Temple Beth-El for a while before Joseph makes his trip to Africa.

You can watch Meira’s goosebump-inducing documentary on YouTube at  www.youtube.com/watch?v=i8pbKS7skAE, a truly moving video. If you would like to contribute medications and help Meira’s campaign to help the Lost Boys, please contact her at mekowalski@shorecrest.org.