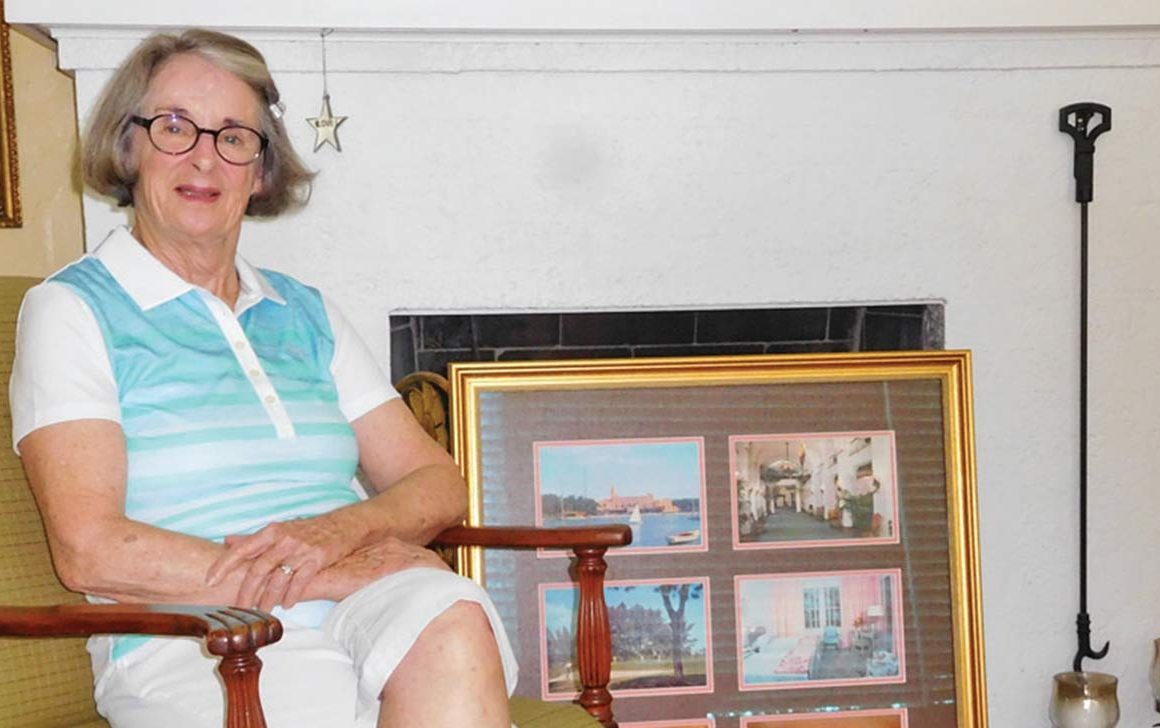 When Robin Reed, a board member of the Historic Old Northeast Neighborhood Association, told me her friend Elaine Normile had recently retired as the historian for the Vinoy Renaissance Resort, my first thought was, “wait – the Vinoy has an historian on staff, how cool is that?”

A petite, bright, articulate 70-something, Elaine retired from the Vinoy at the end of May after an exciting 26-year career; 20 years as the iconic hotel’s in-house historian. This summer, just a week after her retirement, I visited with Elaine at her home in the Old Northeast to learn more about what it was like to be on the Vinoy staff during such a pivotal time in the hotel’s history. 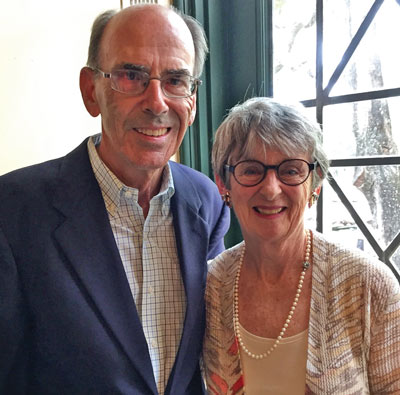 Elaine and her husband Marty moved from Binghamton, in upstate New York, and came here in 1984 for Marty’s job. He was recruited as the first executive director of the St. Petersburg Downtown Partnership, an economic development group charged with giving downtown a kick-start. It’s hard to imagine now, but at the time, there were few downtown restaurants and even fewer retail shops. In fact, Elaine says that one of Marty’s tasks was to find a developer to restore the Vinoy.

Now an impressive landmark on the downtown waterfront, the Vinoy was a mess at the time, a boarded-up eyesore. It had been closed since 1974 and some of the ceilings had caved in, trash was strewn about, all the rich furnishings had been sold, and homeless were living there. Saving the hotel from the wrecking ball was nothing short of a miracle.

In 1992, Elaine joined the Vinoy staff as a secretary in the sales office, just as the hotel was in the process of a massive two-year $93 million restoration and re-opening as the Stouffer Vinoy Renaissance Resort. Bringing the hotel back to its former glory was a turning point in St. Pete’s history, she says. Elaine is not alone in giving credit to the Vinoy for helping launch downtown’s transformation and present-day renaissance. 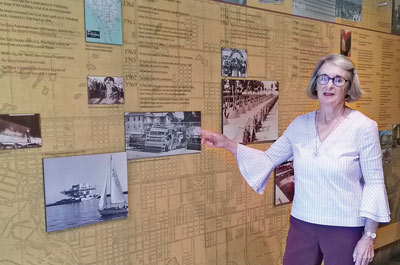 “It was really a catalyst for all the wonderful things we are enjoying now,” says Elaine. “Marty and I knew how important and essential the hotel was to the survival of St. Pete. When all of the pieces came together it was very exciting. To see the hotel rise up out of the ashes and go from a derelict building into a glorious destination on the waterfront was just thrilling.”

The public, of course, was curious to see everything they had been reading and hearing about. “People were swarming to the hotel to see what had been done. They just kept coming and coming to see the renovations,” says Elaine. “The general manager had been to San Diego to see the historic del Coronado Hotel and been given a tour of the property. The seed was planted. He came back and thought we should do something like that here, too.”

In 1998, Elaine was named the hotel’s first historian and given the task of developing a tour of the property. She says she was fortunate to be in the right place at the right time to get the job. In her favor, she already had experience giving tours as a docent for the Dali Museum. This was back in the day when the Dali was still in a small building south of downtown on USF-owned property, not in its current home in the dazzling Dalíesque-building next to the Mahaffey Theater.

But most importantly, Elaine had the inside knowledge about the hotel. “Management wanted someone who knew something about the Vinoy and I had the great opportunity to be part of the re-opening team during the renovation,” says Elaine. “The position of historian was also part-time, which I wanted. So it was a perfect fit.”

There was no shortage of research material for her to sort through: from old photographs, newspaper clippings, and memorabilia to artifacts like the 1,400 pieces of silver flatware discovered in a hidden vault during the renovation. There were also oral histories and anecdotes from the many people who had stayed there, celebrated a special event there, or worked there. “It was my job to separate fact from fiction. We wanted to give guests the most accurate information.”

Elaine led the first official Vinoy tour in February 1998, showcasing not just the hotel’s history, but also the extensive work completed during the renovation. A month later, she hired her first docent to help her. Now there are five to keep up with the demand. Over the years, thousands of people from all over the world have taken a tour.

“Originally the focus was on hotel guests, but now it’s open it to the public,” says Elaine. “We don’t really advertise, it’s usually word of mouth. Tour bus operators book with us. We have tour buses coming sometimes with 50 people. They stop at the museums and Sunken Gardens, and then come by for a tour of the Vinoy and to have lunch.” 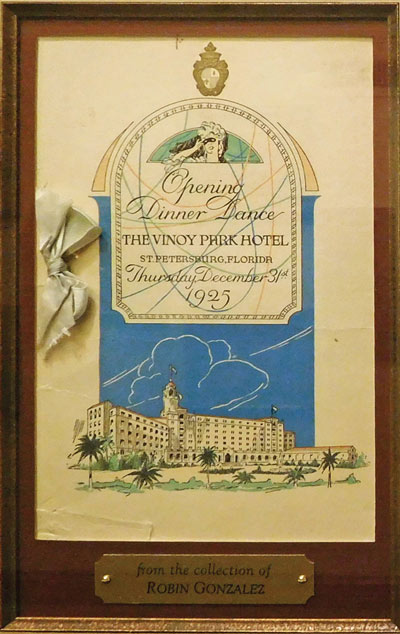 In addition to supervising the docents, Elaine served as a docent herself. “The highest compliments I ever received were when guests said, ‘I see that you absolutely love and have a passion for your job.’ It’s was always personal for me; part of my identity,” says Elaine. What are some of the most memorable tours she’s given? Participants in the Eckerd College Road Scholars experience (an educational travel program for adults), and spouses of high-ranking military officers from all over the world who are part of the international coalition stationed at MacDill Air Force Base.

“It’s such a gorgeous hotel and a great way to see and experience the Vinoy,” says Elaine. “There is so much to talk about during the tours – the stenciled pecky cypress ceiling in the ballroom foyer and lobby for example. The renovation of the ballroom was a miracle.”

Tours are an hour in length and take place Wednesday through Saturday, starting at 10:30 am. The price is $10, or for $27, combine it with lunch at the Vinoy’s main dining rom, Marchand’s Bar & Grill. I decided to take the tour myself to learn more about the hotel’s history, its beautiful architectural details and the long list of famous guests who have stayed there. For example, Babe Ruth attended the grand opening New Year’s Eve party in 1925. Later guests included actor Jimmy Stewart, Presidents Herbert Hoover and Calvin Coolidge, and even Marilyn Monroe and Joe DiMaggio.

My tour docent, Carolyn Zella, pointed out some of the amazing details that I might have overlooked, including the dozens of griffin statues throughout the hotel. From the second floor balcony, we looked down into the opulent lobby and she told me that back in the early days, the lobby was filled with little shops, including a florist, linen shop, and shoe-shine stand. Outside in the side garden, she showed me the quirkiest artifact of all – a replica of a small private solarium. It looks like a small wooden shed on wheels with a door.  Carolyn told me the Vinoy had five or six of them. Guests would sit inside to sunbathe au natural and take advantage of the “healing, restorative powers of the sun.” 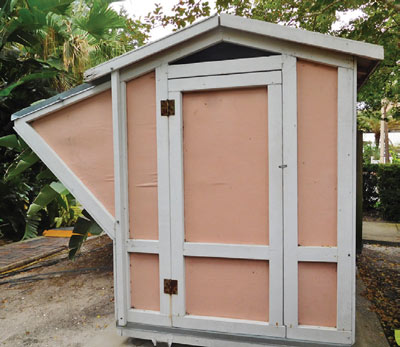 Carolyn also described the hotel’s onsite dormitory for seasonal workers – a part of the hotel that no longer exists. The workers would stay at the Vinoy from October to May and travel to Maine or other resort locations in the summer, often serving the same wealthy families at each venue. A black-and-white photo of workers all lined up in uniform hangs in the Vinoy hallway.

One last amusing, true story: In 1923, Aymer Vinoy Laughner was hosting a party at his home, now the Vinoy House Bed and Breakfast at Beach Drive and 5th Ave. NE. It must have been a wild party, for in the early morning hours, Walter Hagen, a famous golfer at the time, drove several golf balls off the face of Laughner’s pocket watch, hitting residential property across the street. Some of the guests suggested that Laughner purchase the property and develop a grand new waterfront resort there. He agreed, acquired the land for $170,000 and got to work building the Vinoy Park Hotel, named after his family. Elaine has had the privilege of getting to know the Laughner family over the years. One of the grandsons recently moved back to St. Petersburg.

While Elaine may miss being immersed in the history of the grand hotel, she says that in retirement she is looking forward to visiting children and grandchildren, spending time with friends, volunteering, and golfing. She also enjoys frequent long walks, including a route that takes her by the Vinoy. On a Sunday morning in July, she stopped by for the first time since she retired. “I felt like I had just been off for a few days, not different at all,” says Elaine.

She says there were so many memorable moments on the job, not just developing the tours, but also collaborating with an exhibit designer to create the interesting history gallery at the far end of the hotel lobby, and later helping organize festivities to celebrate the hotel’s 75th anniversary in 2000. “The anniversary celebration was a really lovely event and I was given a lot of authority to generate ideas to make it special,” says Elaine. “The public was invited and we had a juried art show.” 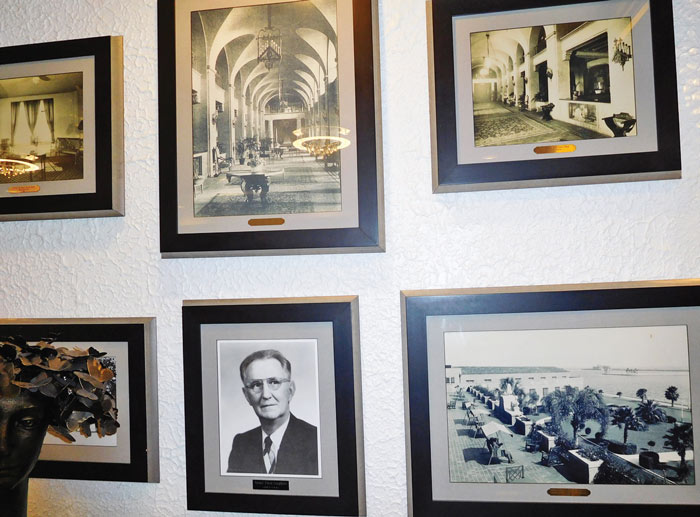 Elaine hints that the last day on the job might have been one of the best. “It was very joyous,” says Elaine. “I don’t seek a lot of attention, but it was it nice to be celebrated.” A prized going-away gift now hangs in her home – a collection of historic photos of the hotel during its early history as St. Petersburg’s grand winter resort.