Empowering People Through the Magic of Sailing 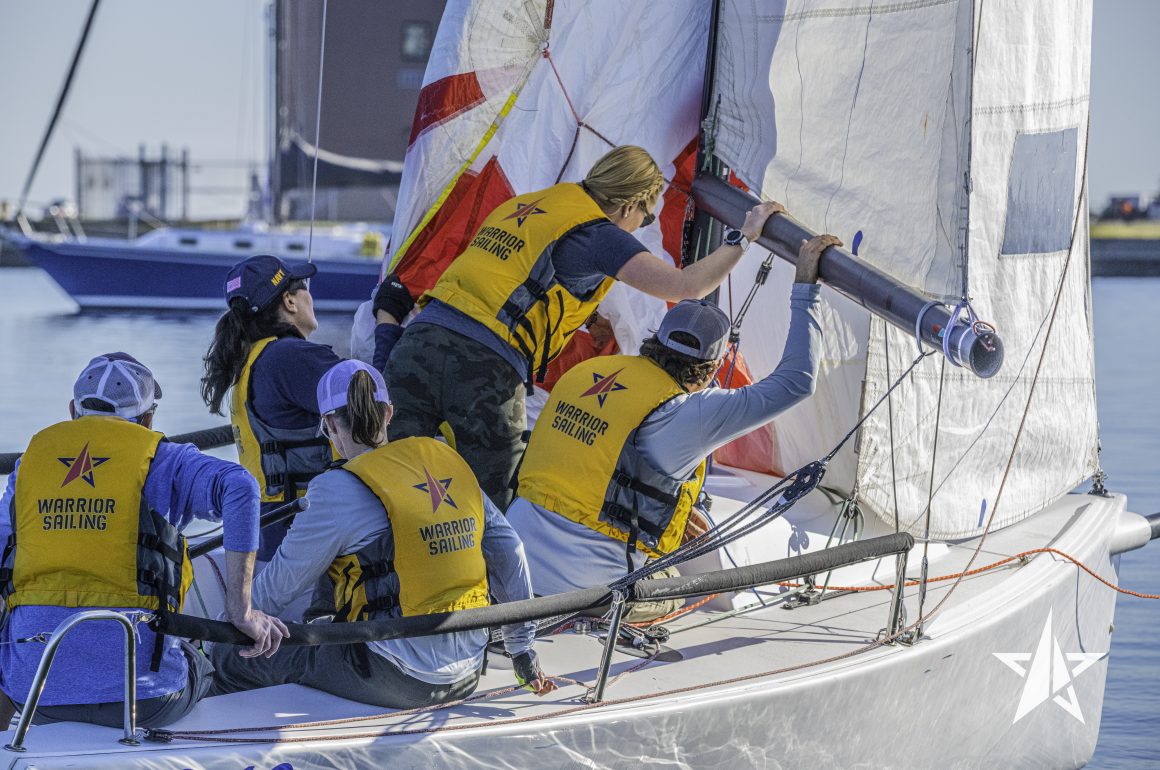 Ed Baird was 9, and Allison Jolly was 10 – two local kids looking for something to do on summer vacation – when their parents enrolled them in “learn to sail” lessons at the St. Petersburg Sailing Center. Both would go on to be superstars in the world of sailing. But at the time they were just having fun, hanging out with friends on the water.

“The Sailing Center was our home away from home,” Jolly recalls. “It was a very safe and welcoming environment.”

St. Petersburg was still a small town not yet discovered, then. Even the waterfront looked different. “The whole area where the Sailing Center is now was old wooden buildings owned by the railroad,” says Baird. “There was no marina on the south side or breakwater out to the bay. No dollies to move the boats around. It took three or four people to step around the sandspurs to pick up a boat.”

For young kids, it was paradise. “We were pretty much on our own,” says Baird. “Our parents would drop us off in the morning and we’d spend the day. Bring our lunch and 15 cents for the soda machine. We were just playing and learning as we went along.”

Jolly admits that sailing wasn’t her first choice for a sport. She tried swimming, softball, basketball, horseback riding, tennis, and golf, but wasn’t particularly good at any of them.  “Finally, my parents suggested sailing,” she says. “I liked that I could use my brain and my body while staying cool. This was pre-air conditioning Florida and staying cool was a priority. I thought, ‘Oh this works for me.’ And it required an understanding of physics, math, the environment, and the weather. It was love at first sight.”

For Baird, it was less about staying cool and more about the feeling that sailing gave him.  “The independence is amazing,” he says. “Growing up, we’d ride our bikes around the neighborhood exploring and only get a couple of blocks before we’d wear out. But on the water, it was totally different. You get to control this vehicle completely on your own and have total freedom to be in nature. It’s like new territory every day.”

One thing they did have in common was a love for competition. “We were always in competition,” Jolly jokes. “Ed was my best friend/worst enemy in sailing. I have to admit that I competed pretty voraciously from the time I was about 10 or 11.”

Over the years, the Sailing Center grew up, too. The dilapidated shacks that Baird and Jolly remember were torn down and in 1977 the city built a new Sailing Center on Demens Landing.  The city entered into an agreement with the St. Petersburg Yacht Club to operate the Sailing Center, which was renewed for an extended 20-year lease in 2019.

This past summer 550 youth participated in the Sailing Center’s summer camps, which accepts children as young as age five. After completing learn-to-sail lessons, kids can continue to sail after school and on weekends or join a youth racing team. Teams from St. Pete High, Lakewood, and Shorecrest also practice and race out of the center.

Classes are just as diverse for adults, who can take either group or private lessons. Low-cost community memberships are the next step for sailors who are certified, which gives them the opportunity to take out the Sailing Center boats any time they want.

A Fair Wind for Everyone

“People sometimes have a stigma about sailing, this idea that it’s khaki suits and ties, and that is simply not true,” says Jolly, who teaches adults in the learn-to-sail program. “It’s incredibly rewarding to introduce people to something you love. There are people who are retired and always wanted to sail, young couples looking for something fun to do, and families with teens who enjoy time on the water together.”

One of the unique features of the center is the adaptive sailing program. “We were one of the first places in the world to have handicapped-accessible docks, and cranes and lifts to help people get into the boats,” says Baird. “We’ve been a pioneer in this area.”

The City of St. Pete Therapeutic Recreation Department regularly partners with the Sailing Center for adaptive sailing. So does Warrior Sailing, a national nonprofit organization for wounded, ill, and injured military service members and veterans. “We would never have gotten off the ground without the Sailing Center’s support,” says Cory Kapes, a St. Pete resident who is program manager for Warrior Sailing.

In 2013, Warrior Sailing held its inaugural sailing program at the center. Since then, 570 men and women have participated in the three-day basic training camp that teaches them sailing basics and builds their confidence on the water. The Sailing Center hosts the group, providing the facilities and boats; Warrior Sailing coaches provide the instruction.

Sailing provides a unique therapeutic environment, says Kapes. “It requires teamwork and can be physically demanding. Engaging in the sport, alongside men and women who share similar experiences in the military provides them challenge and the camaraderie many miss from their time in service.”

For the past two years, Michelle and Michael Schultz have partnered with the Sailing Center to allow children with medical needs to enjoy a day on the water. The couple sponsors the annual outing through Landon’s Legacy, a 501c3 nonprofit they created in memory of their son, Landon, who was born with medical complications and died at three days old. His twin brother Logan, now 2, survived.

“It’s an opportunity to celebrate Landon and give back to families who don’t have a chance to enjoy doing something together as a typical family,” says Michelle. “It takes a lot to bring a child on a ventilator, or a child with a spinal cord injury or cerebral palsy, anywhere. Just getting out the door can be difficult.”

Michelle admits that at first she was skeptical about how the Sailing Center could accommodate a 400-pound power wheelchair rolling down a dock, or lifting a child who is immobile onto a boat. But the Sailing Center “had all the equipment we needed and the sailors were so calm and willing to help,” she says. Her favorite photograph from the first event?  Seeing all the empty wheelchairs lined up the dock because the kids were out on the boats having fun.

“You can never have a bad day on the water,” says Hall. “Sailing empowers people and it helps release the hustle and bustle of the world. We’re fortunate. Here in St. Petersburg, there are plenty of opportunities to have that experience.”