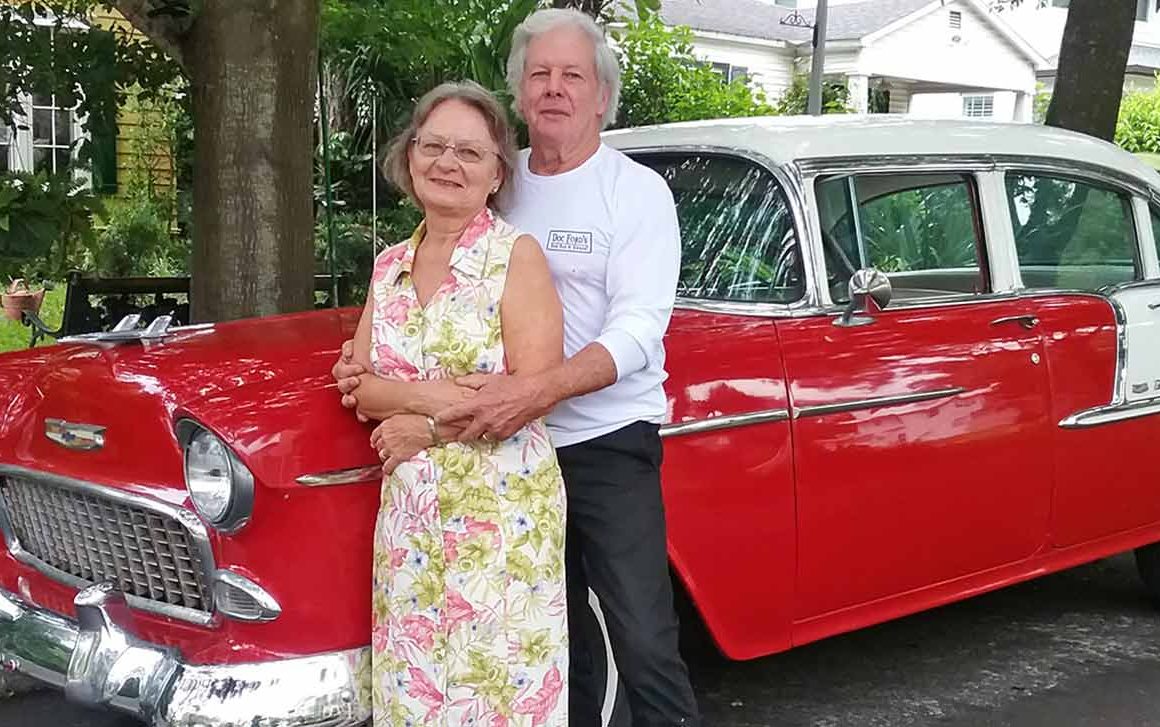 In rural upstate New York where they live six months out of the year, Jim and Eva Tomlinson have an apple grove with 100 trees; a field with raspberries, strawberries, and blackberries; two large vegetable gardens, and a big pond. It’s peaceful. They can sit on the front porch of their 100-year-old cottage and see the fireflies and stars at night. Wildflowers like Queen Anne’s lace and day lilies grow everywhere. Oaks, maples, and other hardwood trees cover most of their 50-acre homestead.

But, they also have no electricity… which means no computer, no TV, no dishwasher, and no automatic coffee makers. Eva cooks on an old-fashioned wood-fired stove. Because they don’t have refrigeration, they use three coolers filled with ice for anything that needs to be chilled. The source of their water is a cistern from a mountain stream. As far as phone service, Jim jokes that they have cell phone coverage if they go outside and walk to the top of the hill.

It’s a far cry from their home in St. Pete, in the Crescent Heights neighborhood where Jim and Eva continue to live the other six months. This is where they raised their four children: Jennifer, Joanne, Jeffery, and Jessica, all of whom are adults and on their own. In 2000, Jim retired after 25 years as a firefighter-paramedic with the St. Petersburg Fire Department, primarily in the Emergency Medical Services Division.

While the idea of leaving behind hot humid St. Pete summers in exchange for an idyllic laid-back rural lifestyle makes me envious, I also can’t imagine not having some of the modern-day conveniences we all take for granted. “In New York, it feels like time slows down,” says Eva. “We can sit on the front stoop or take a walk in the woods at any time. Then just when we’re done with the quiet, we can pack up and go back to St. Pete. We really like the change. It gives us an appreciation for both.”

Jim calls their New York home a “rural Shangri-La.” “We get up with the sunrise and go to bed at sundown. No traffic or sirens. It’s like a detox from information-overload. We go there for a different lifestyle, to be close to the earth, in balance with nature. Then after six months, we start back. By the time we get to the Bearrs exit on I-275 in Tampa, it’s like flipping on the switch again.”

For Eva, spending time in New York is more than a retreat, it’s also a chance to get back to her roots. She grew up nearby in a small Polish community, not far from Buffalo. The 50-acre homestead with its two-story cottage has been in her family for generations and had at one time belonged to her grandmother.

Jim is no stranger to spending time in the woods, either. He grew up just outside the city limits of St. Petersburg. This was the early 1950s, when dirt roads, dairy farms, and orange groves were common and there were plenty of undeveloped wooded areas to explore. It might have been the perfect childhood except for a series of tragic accidents that changed Jim’s life in ways that are hard to imagine. The one common denominator in all of the incidents was being rescued by local firefighters.

In the first experience, Jim recalls local firefighters rescuing the family after their home burned to the ground. A year or so later, when he was four, fireman came to the rescue once again when a terrible car accident left Jim and two of his brothers trapped in the backseat. Sadly, his mother and another brother, an infant, didn’t survive. Although Jim’s father was fine physically, he was never the same again emotionally.

By the time Jim was six, he was fending for himself, at first earning money by pulling weeds for a local nursery and then getting up early to tackle several paper routes. When he wasn’t working or in school, he spent as much time outside as possible, even camping out by himself for a few days a time, setting up his tent near the former Hood’s Dairy near 62nd Avenue North, and sometimes on Weedon Island. You could definitely say he grew up in the woods. Nature was his solace. “Being outdoors gave me peace – the trees, the animals, and the stars were my comfort,” says Jim. “Inside a building, I felt closed in.”

Unlike today, the only danger was when the flames of his campfire sparked nearby brush fires – bringing firemen to the rescue! It’s not surprising that years later, Jim would become a fireman and paramedic himself. “I figured that I should repay my debt to the community,” he says. Looking back, he says that “both roles were a natural for me, but being a paramedic was most beneficial for me and the community. I could easily relate to tragedy, overwhelming grief, and those struggling to make sense of one’s life. I was fortunate to have a career doing and being where I needed to be.”

After high school, Jim left to serve overseas in the US Army and then had a stint with the merchant marines. After coming back to St. Pete to settle down, he met Eva met through a mutual friend. “I made her dinner and I was hooked as soon as she put on an apron to clean up and wash the dishes,” says Jim with a big smile. “From a young age, I always knew that I wanted to get married, be a good husband, and have children to make up for everything I missed.” He and Eva have been married 41 years, creating a life together that included four children and “a zillion” pet cats, birds, dogs, chickens, ducks, and rabbits. The kids grew up enjoying the outdoors as much as their parents, with camping, canoeing, and hiking being part of their lifestyle.

Over the years, the family would spend a few days here and there at the New York cottage, but it wasn’t until retirement that Jim and Eva decided to transform the home into something liveable. “It was really ramshackle and rundown,” says Jim. “No one had actually lived in it for about 25 years.” Slowly, he began fixing everything from the foundation and the roof to the walls and the plumbing, turning it into their little slice of paradise.

In fact, because of COVID, this past year was the first time since 2006 that they didn’t spend the summer in New York. How did they spend their time instead? You might have seen them out for a drive around St. Pete in their mint-condition 1955 Chevy Belleair with its crank windows and vintage red-and-white paint job. “We raised all of the kids in that car. It’s been up and down the country, from New York and back,” said Jim.