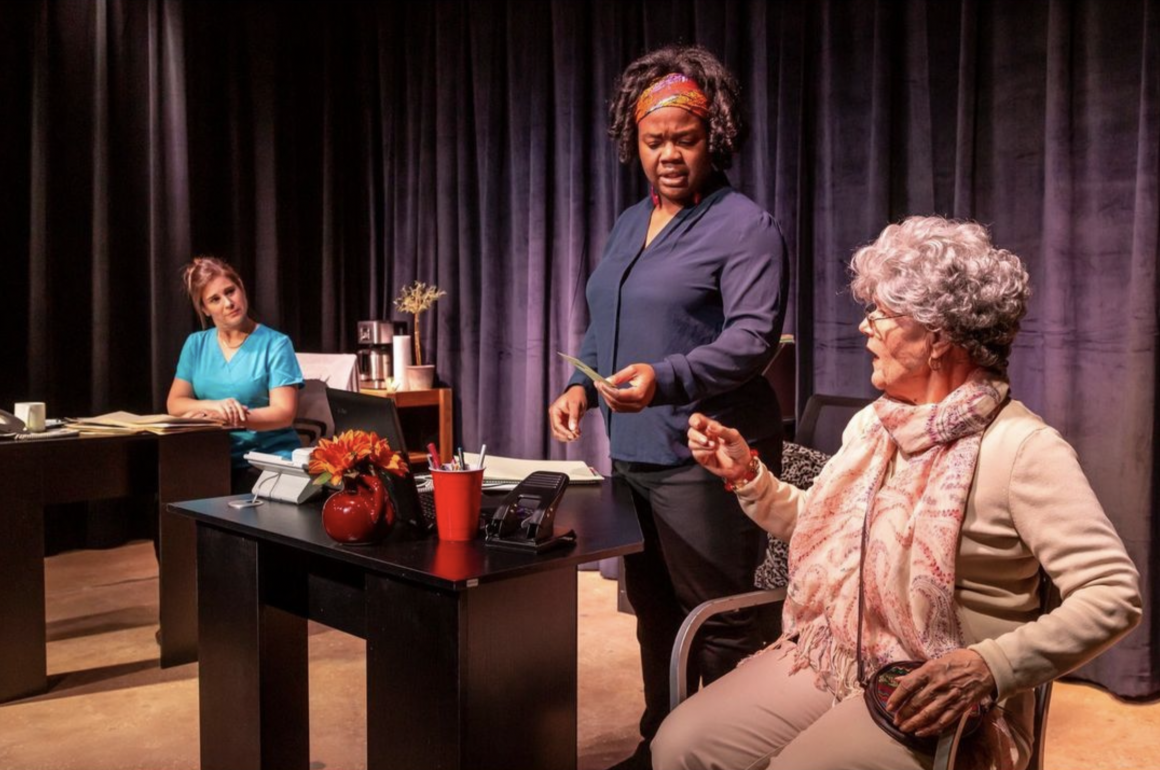 With just 43 seats, Studio Grand Central could be considered a little theater, but “intimate” and “engaging” are better descriptions for this unique venue, home to the Off-Central Players theater company, a “professional arts organization committed to providing instruction, development, and theatrical storytelling for St. Petersburg’s diverse community.”

The building located at 2260 1st Avenue South was home to the Andi Matheny Acting Studio for ten years until siblings Ward Smith and Karen Riffe bought it in February 2021. The property, already complete with theater seating and lighting, had come on the market just a month before. The brother-and-sister team had been talking about the prospect of starting up a theater in downtown St. Petersburg for several years before it became a reality – even if the timing was terrible. Karen’s husband, Danny, was ill and ultimately passed away in June 2021. Running the studio has turned out to be part of the healing process for Karen.

“Deep inside, I was acting on something that I still can’t quite grasp,” Karen writes in a moving blog on the theater’s website about starting the Studio. “That life does go on and must go on even amidst the very worst of times… [Studio Grand Central] is a great way to stay busy and distracted. Sometimes, I’m lucky enough to get so into it, I’m actually having fun and forget for a few minutes about the despair. Maybe it is not the best time or the worst time, just the right time.”

For the brother-and-sister team, it seems this may have always been in the cards.

“I am the ‘show’ and Karen is the ‘business,’” says Ward about how he and his sister collaborate to make this new enterprise work, though technically they both have roots in local performance. Their dad was Hugh Smith, an on-air broadcaster on Tampa Bay’s WTVT – Fox Channel 13. Growing up with a father who was a local celebrity, Ward had many opportunities to be on the set where his dad worked. Being exposed to television as a young boy, Ward decided that “this is how the magic is done.” He recalls thinking that any time he was at his father’s place of work, he just might bump into movie star John Wayne. After all, “John Wayne came out of the same box, [a television set], as my dad did,” says Ward.

The acting bug really got hold of Ward while he was at Leto High School in Tampa. Vince Petti was Ward’s teacher and mentor there, and convinced Ward that he had what it took to make a life in the theater.

“Stay in the building” is the quote Ward remembers most from Vince. That meant even when it wasn’t possible to be in a production as an actor, to stay in the building doing whatever support work was available. Following Vince’s advice made it possible for Ward to learn the technical and managerial aspects of running theatrical productions. Assimilating all that knowledge has paid off in the running of their theater, and a picture of Vince graces a wall in Studio Grand Central as a tribute.

When his sister refers to Ward as “The Talent,” she is spot on. Ward began his 35-year career as an actor in the US Army doing USO shows. With 50 stage productions to his credit, he is a member of AEA (Actors Equity Association). As a member of SAGAFTRA (Screen Actors Guild – American Federation of Television and Radio Artists), Ward appeared in episodes of “Zoo,” “Nashville,” “Let’s Stay Together,” “Burn Notice,” “Army Wives,” “MacGyver,” and “The Right Stuff.” Add to that touring nationally as a standup comedian and a more recent position as the former Artistic Director at The Heather Theater in Tampa, and that only scratches the surface of Ward’s resume.

Knowing how much being introduced to acting at an early age impacted him, Ward opened an education wing to Studio Grand Central in the form of Big Break Youth Stage. Katie Calahan is the Education Program Director there for children ages 5 to 17. Ward likes the idea of contributing to the next generation of actors. “I am looking forward to employing [kids from his education program] in the future,” he says.

But it’s not all about performance at the Studio. A visual arts component – “The Gallery @ Studio Grand Central” – was part of Karen’s dream. “When Ward and I talked about a studio, it always included a visual art gallery space,” she writes. “I love a theme and the idea of displaying art to coincide with the ideas within a play. By combining these art forms in one space and with one theme, (hopefully), we create an even more interesting experience for the audience. And equally as important, it makes the Studio a place for all kinds of local artists to participate.”

Ward now lives on 5th between 1st and Bay, “just on the line between Old Northeast and Downtown,” and Karen also lives in the area. They recently moved their mom into the Westminster, so work and family are all close by.

Six months after Karen and Ward bought Studio Grand Central, they opened the curtains on their first production in August 2021, “Rasheeda Speaking.” The play opened to good reviews, and they were in business.

Selecting plays for this intimate theater that seats 45 – but that can handle a maximum capacity of 75 if they “pull out all the stops” – takes a good deal of forethought. It’s a type of IKEA-thinking adapted to theater. Ward refers to the space as his “sandbox.”

Ward’s approach as producing artistic director is to have very few “dark nights” when the theater isn’t open, so he’s amenable to whatever keeps his “calendar with lots of squiggles on it.” He produces musicals, comedies, and dramas “as long as it fits in the space,” he says.

To fit in the space, productions must feature small casts and have the potential for scenes to work in the contained area. But most of all, Ward says he chooses “a work that speaks to an issue without being heavy-handed.” Playwrights, he says, can be local, unknown, or world-renowned – so long as the play meets the criteria.

Ward and Karen must be doing something right, however, because after only one year in business, the company’s production of “Something Clean” was nominated for awards in five categories by Theater Tampa Bay, including Best Ensemble, Best Actress, Best Lighting, Best Play, and Best Director (Ward). Going up against “heavy hitters” in professional theater in Tampa and St. Petersburg made it no small feat to be recognized in this way – a welcome addition to the Bay area’s theater scene – and only blocks away.

As Karen writes, “Ward and I are beyond excited to be right here, right now – working on this together. As Ward says, it is not a ‘Mom and Pop’ shop but “Brother and Sister,” with way more tales to tell. Stay tuned.”