Finding Her Heart’s Calling In a Second Career 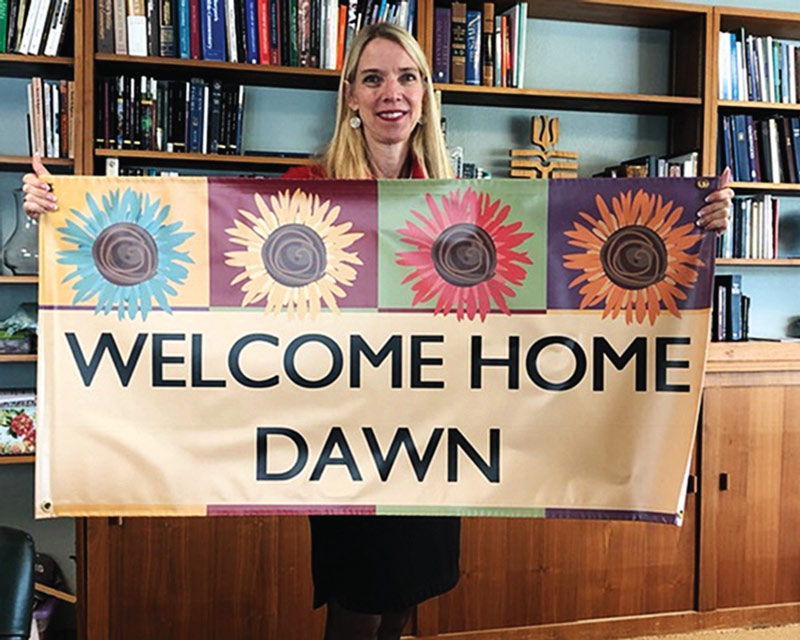 How many times have you questioned your career path? As we mature, we often think about finding a job that is more rewarding, does more to help others, or would make a difference for our community or society. But how many of us would be willing to actually take that risk once our careers are firmly established and successful? The Rev. Dr. Dawn Conti, the new senior pastor at First Presbyterian Church on Beach Drive, was willing. 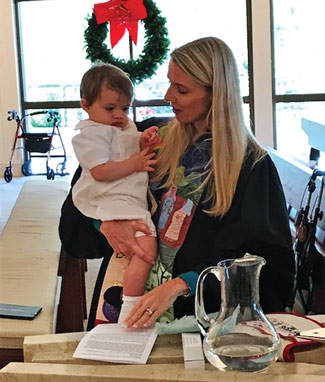 When I asked Rev. Conti what gave her the inspiration, courage, and confidence to answer a call to ministry and change careers, she responded: “Soren Kierkegaard says that life is lived forward, but understood looking back.” Looking at her own life, she says she is able to see now that she wrestled with the decision to become an ordained minster for many years before finally answering the call. In fact, she first felt the stirring of a call to pastoral ministry when she was in college. Dawn says that she always knew deep in her heart that someday she would serve the Lord and help others find faith.

Dawn was raised in a faithful, loving family with parents and grandparents who were educators. Her mother was a teacher, and also founded and directed a Lutheran preschool. Her father was an elementary school principal who always wanted one of his children to earn their doctorate degree. She grew up in a suburb of Cleveland, OH until 1978 when her family moved to Florida, the state she now calls home. After high school, Dawn attended Rollins College in Winter Park, where she received a Bachelor’s degree in business. She later received an MBA from Drexel University in Philadelphia.

Dawn’s husband, Kevin, also has a business degree, and the two started their careers in Greensboro, NC, where their daughter, Emily, was born. Later, the family moved to Jacksonville to be near Dawn’s parents. Their youngest daughter, Kate, was born there and the Contis began attending the local Presbyterian Church. Dawn was active with the church, and a volunteer position as pastoral associate was created for her. She also served as a chaplain in a local Baptist Hospital. It was during this time that she discovered she loved to preach and felt that this would ultimately be her primary gift.

Eventually, Dawn took a leap of faith. She had prayed long and hard about it, and now decades after she experienced the first call to ministry, she decided it was time. It would not be easy for her family to pick up and move to a new city. Her daughters were just three and five at the time, and her husband would need to find a new job. These were difficult but exciting times for Dawn as she made her personal commitment to both herself and her faith. Fortunately, her family was very supportive.

Dawn applied to and was accepted to several seminary schools around the country. Then fairly late in the process, a liaison with the Presbyterian ministry suggested she apply to Louisville Seminary in Kentucky. Initially, she was frustrated with the last-minute suggestion, but completed the application anyway. She was surprised and blessed to receive a full-merit scholarship, which would pay for her three years of school and living expenses.

The family was living in Jacksonville at the time, and decided to put their home on the market in anticipation of the move to Louisville. The school had invited Dawn to visit the campus during Thanksgiving break. As soon as Thanksgiving dinner was over, Dawn and Kevin left the girls with her parents, and drove to Louisville. While they were there, they looked at several houses with a real estate agent, but without much success. At the last minute, in what would be a serendipitous moment, the agent drove them by a lovely home that he said belonged to a recent widow and was not yet on the market. They decided to go ahead and make an offer on the house contingent to the sale of their home in Jacksonville. The very next day, they received an offer on their home. “God’s timing was perfect,” says Dawn. There were further blessings as well. Kevin got a promotion working for Blue Cross Insurance. 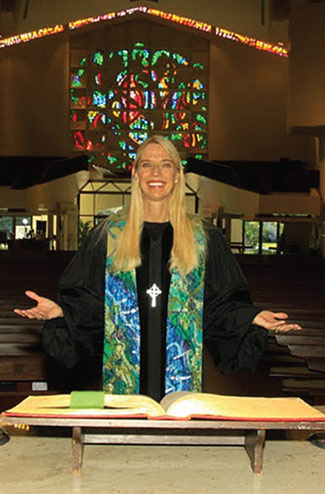 After receiving her degree from Louisville Seminary, Dawn launched her second career as a pastoral minister at Kanapaha Church, a small congregation of 100 members in Gainesville. She served there for 14 years. During this time, she completed a three-year program at McCormick Theological Seminary in Chicago and graduated with a doctorate of ministry in preaching. She also became involved with Macedonian Ministries, an organization providing support, education and renewal to pastors around the country and in Scotland. Through Macedonian Ministries, she was blessed to receive a two-week, all-expenses paid spiritual retreat and pilgrimage to Israel in 2014. She traveled to Galilee and Jerusalem, where she spent time with other pastors and learned about the area from a biblical archeologist and Palestinian guide. Dawn said the trip was transforming and made it even clearer that she was following the right path.

Last year, Dawn decided it was time to search for a new experience, and prayed for a church in Florida as both her daughters, her mother, and her two brothers and their families live in the state. Her prayers were answered when First Presbyterian on Beach Drive hired her last fall as the church’s first female senior pastor. The church has over 700 members, three worship services, a multitude of educational programs, and an active ministry in the community. She says the new congregation has been very welcoming, loving, and accepting, and she feels truly at home. She is convinced her second career is all part of God’s plan as she utilizes her first career skills in business every day as she serves her congregation.