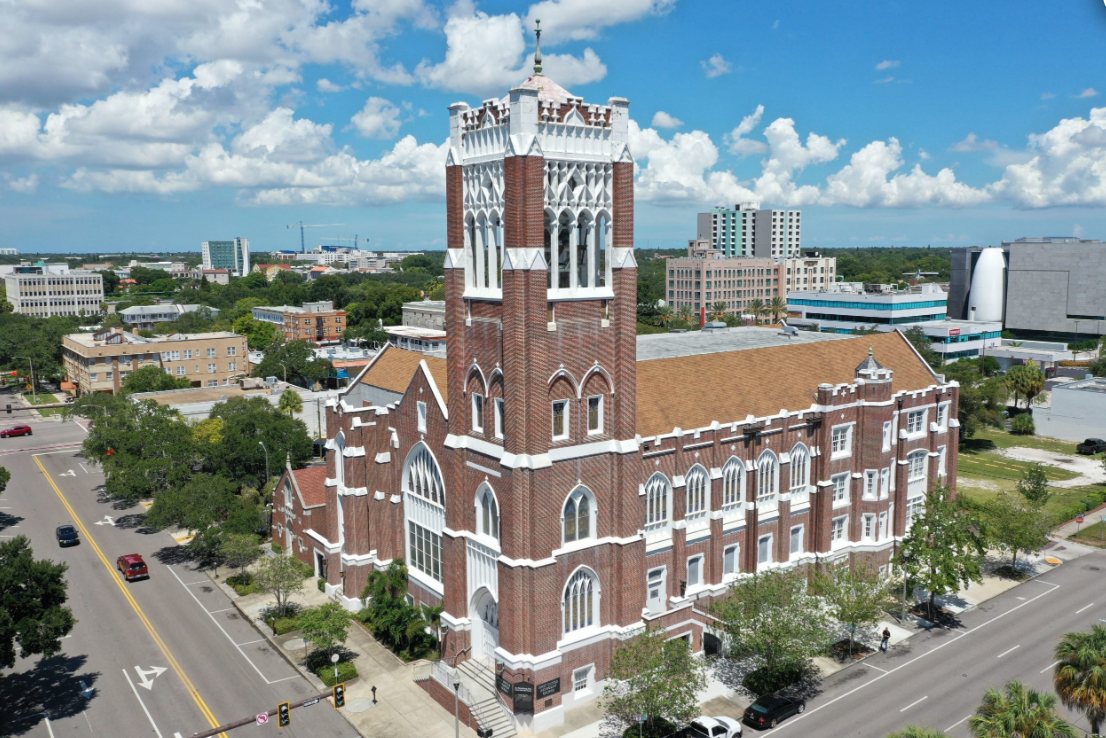 Historic landmarks, especially cherished churches, require TLC, and so it is with First United Methodist located across from Williams Park in downtown St. Petersburg. The church dates its history back to 1889, a year after the city’s founding. The first church building was erected in 1892 and later succeeded by a second building on the corner of 2nd Avenue North and 3rd Street in 1902. The present grand structure dates from 1925-27.

The rebuilding resulted in an architectural gem. First Methodist is significant for its artistic use of the Gothic Revival style architecture with an English Gothic influence. It’s constructed of red brick in what is called a “stretcher” or “running bond” pattern; cast concrete ornamentation is present on all facades. The roof is a steeply pitched, pseudo-mansard style with slopes sheathed in gray slate shingles. All windows in the sanctuary are made of leaded stained glass manufactured by the George Hardy Payne Studios of Paterson, New Jersey. These windows are in the Tiffany style, which incorporates multiple layers of opalescent colored glass, often faceted, with traditional painted and fired glass. The 10 windows of the east and west walls of the sanctuary on the lower level depict major events in the life and passion of Christ. The large window facing Williams Park is a reproduction of Leonardo da Vinci’s The Last Supper.

The church’s 144-foot-high bell tower originally housed a 10-bell carillon, which was later increased to 15 bells. The first bells were bronze, cast by the Meneely Bell Company of Troy, New York, in 1926, and the largest weighs 2,208 pounds. The church is celebrated as the location for the wedding scene in the 1985 movie Cocoon. First Methodist is now one of our city’s most treasured historic landmarks. It was officially designated as a National Landmark in 1990 and as a City Landmark in 1993.

Regardless of how well any church is built, maintenance is an ongoing necessity.  Periodically special treatment of the building also is needed. The last intensive building maintenance was provided with the help of a state grant approximately 20 years ago. Now it’s time for another in-depth refurbishment. That job has fallen to Cassie Gardner, founder and CEO of family owned All Trades Historic Restoration Construction Company. Gardner’s company is headquartered in St. Pete, where she is also a resident, and specializes in historical preservation. Her portfolio includes familiar local and regional landmarks such as Bok Tower in Lake Wales, the Terrace Hotel in Lakeland, Union Trust Bank in St. Pete, Centro Asturiano in Ybor City, Greater Bethel Missionary Baptist Church in Tampa, and the Fanny A. Ponder Meeting House for the Metropolitan Council of Negro Women in St. Pete, among others. This past year All Trades was awarded the Preservation Craftsmanship Award from Preserve the ‘Burg for restoration of the Union Trust Building.

Gardner’s family has been in the construction business for three generations. Her husband Randall Gardner is a stone mason and partner at All Trades.  She anticipates her new son, appropriately named Mason, will add a fourth generation. Gardner grew up in the restoration business. Her farther, “R. J.” Dale Kunkle, began his company, Masonry Maintenance in Ohio, in 1954. When she left his company and moved to St. Pete to start her own business, her father told her that she’d be back. It’s been eight years, and instead, he’s has flown to St. Pete each year to visit and admire her work.

Says Gardner, “The reason I came to St. Petersburg is that I, as a general contractor, saw the need for a female business entrepreneur who has a passion for preserving historical structures in St. Pete. Leaving the cold winters of Ohio behind didn’t hurt much either.”

Gardner’s sister, Melissa West, is also in the preservation construction business. She owns large equipment and crane rental company, Tradesman Crane. Some of her notable projects are the Iwo Jima memorial in Arlington, Virginia, and the Old Jefferson courthouse in St. Louis, Missouri.

“I am blessed to have such an amazing family with a strong historical preservation background. I speak with my sister and father weekly about preservation projects, whether it be past, present, or future,” says Gardner. “Mason doesn’t have a trowel yet, but he will be getting his tools as soon as he is able to hold them!”

Prior to commencing work at First United Methodist, Gardner undertook an inspection of the entire church building. She determined the large window depicting da Vinci’s Last Supper to be in remarkably good condition. Some windows, however, are without exterior protective overlays and these will be added as a part of the restoration. The bell tower needs special attention due to spalling concrete and deteriorated rebar.

First Methodist is primarily in need of masonry restoration, specifically “repointing,” a process of replacing deteriorated mortar from the joints of a masonry wall with new mortar. Properly done, repointing restores the visual and physical integrity of the masonry. Improperly done, repointing not only detracts from the appearance, but may also cause physical damage to the bricks. The brick restoration itself involves the “center cut chip method,” where the mortar between the bricks is chipped away and then replaced. The process is meticulous and time-consuming.

A great deal of thought goes into the restoration of brickwork in a landmark. It is not a matter of just buying “off-the-shelf” mortar mix and other needed materials. Samples of the existing mortar were sent to a mortar preservation specialist in Maryland where the old mortar was not only matched for color, but also elasticity, porosity, tensile, and compressive strength. This assures that the new mortar will set in the same way as the masonry being restored, eliminating one of the primary causes of wall failure. Church representatives themselves selected the final color.

Permitting the work was a further challenge. Because the church is a city-designated landmark the workplan for the building required approval from the city’s Urban Planning and Historic Preservation Division. This process was quick. However, rather than ladders, Gardner uses scaffolding to cover exterior walls, which is safer and more efficient. Securing permits for the required massive scaffolding, which partially obstructs the sidewalks, was the greater challenge. The city has both city and state-maintained sidewalks, and First Methodist has both – each with its own permitting process.

Interestingly, All Trades office is located on the church’s property and has been the home of Gardner and her team for seven years. Every day Gardner came to the office, looked up at the magnificent bell tower, and said, “One day, you will be mine.” Through patience, prayers, and perseverance, Gardner and her team’s dreams finally came true.

Life-long church member Bob Ulrich is proud of the church’s stewardship commitment to preserving First United Methodist. “Our city has seen considerable structures of our past fall to the wrecking ball,” he said. “We must closely guard First Methodist and our other city landmarks.”