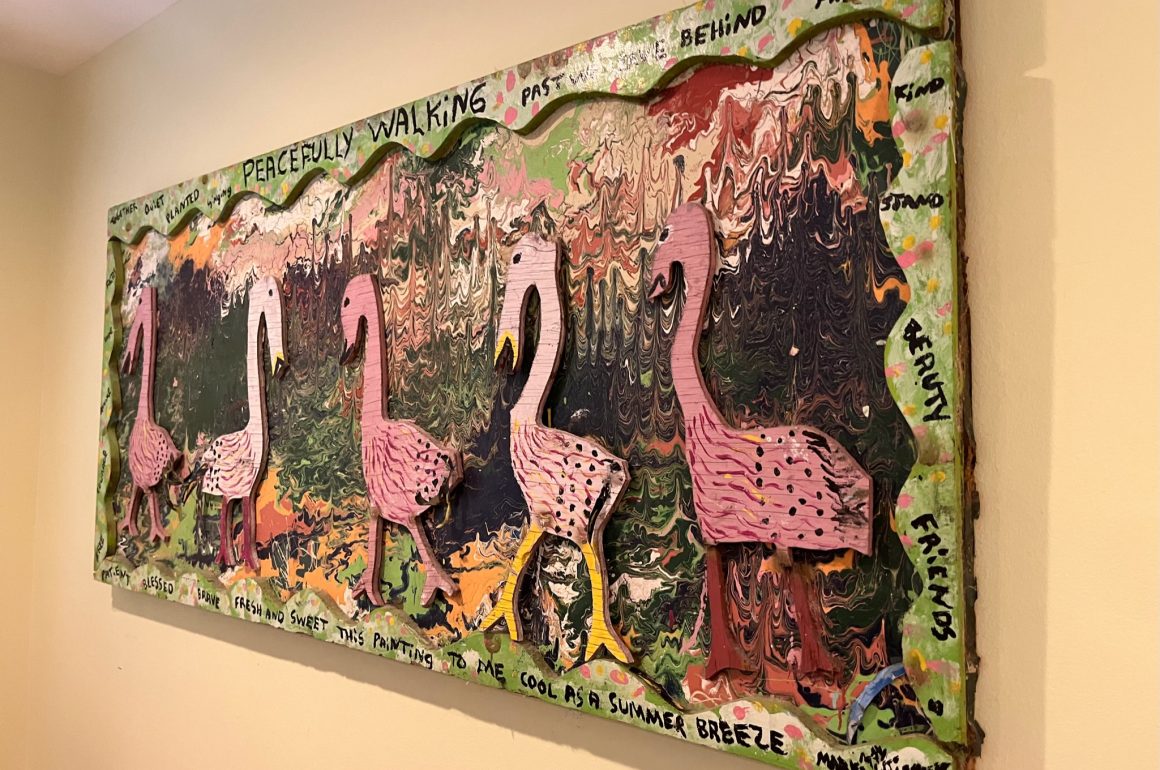 It started with an angel. No, not a real angel –  a folk angel. More accurately, a folk-art angel.

Emily Kleine met Tash Elwyn at Emory University. “We had no money,” Emily recalls. “He was a cold caller for Ray Jay, and I worked for a nonprofit [Atlanta Preservation Center].” Emily was headed toward the world of historic preservation – in St. Petersburg, she’s known for her work with Preserve the ‘Burg – and Tash was still wet-behind-the-ears in the finance world (he’s still with Raymond James, now as vice president).

The one thing they knew about each other? “We liked art,” Emily said. They still do. As nearly starving students, they bought what art they could afford. When you see their home in the Old Northeast today, the idea of Emily and Tash as destitute college students seems laughable, but Emily says it’s true – they were broke.

“We couldn’t even eat turkey sandwiches, because we had no money,” she says of their co-ed days. However, tor Emily’s birthday one year, Tash wanted to find something meaningful that he could afford. Enter a Baptist preacher, some of the best music from the ‘80s, and a trip to Summerville, Georgia.

In the early ‘90s, folk art “was becoming a thing,” Emily says. Folk art can encompass a broad range of media but is generally considered art that is unique to a certain culture, region, or community, and steeped in their histories and traditions. Folk artists themselves were becoming more widely known: In 1983, R.E.M. filmed the music video for their message-heavy single, “Radio Free Europe” at an artist’s studio in Summerville. The video included the band wandering through a bicycle tower in the artist’s garden. The following year, they asked that same artist to create the cover art for “Reckoning” (I.R.S. Records). The year after that, the Talking Heads released “Little Creatures” (Sire Records), and the same artist created the cover for that album. That artist was Reverend Howard Finster.

Finster, a Baptist preacher who held tent revivals, started creating folk art in 1976. The story goes something like this: While painting a bicycle, some paint on his finger looked an awful lot like a person’s face, and Finster said at that moment a voice told him to “paint sacred art.” He was 60 years old. Before he died 25 years later, he would take that directive from on high and create more than 45,000 pieces of folk art – 46,991 pieces, to be exact. Finster showcased his work in Summerville studio, called Paradise Garden. Although he died more than two decades ago, Paradise Garden remains (paradisegardenfoundation.org) a tribute to the artist and “outsider,” or self-taught, art.

Today, folk art and outsider art can get pricey, but not nearly as pricey as a Monet or even a Duncan McClellan. “We’re not collecting Rembrandts or Dutch masters,” Emily says of the folk art in her home. “[Folk art has] become more collectible over time, but it’s still attainable to buy it.”

In the early ‘90s, it was even more so. “Southern, self-taught folk art was attainable,” Emily says. “It was in the ether.” So, for Emily’s birthday, Tash made a four-hour round trip from Emory to Summerville.

“He went to Howard Finster’s Paradise Garden and bought me the angel,” Emily says, referring to a small – less than a foot tall – angel sculpture in her living room. Tash paid $50.

“There was a woman I knew that had a big one,” she remembers, and adds that Tash knew she wanted to have an angel sculpture like that one day. “That’s how I knew he loved me and how I knew I loved him,” she says, smiling.

Fast forward to now: They’re no longer broke college students, but they still seek out folk and outsider artists. “It’s kind of fun to have something together,” she says.

Today, their home is a tribute to those artists. It’s not the largest private collection – that honor likely goes to the House of Blues at Disney Springs in Orlando – but it’s impressive. Between their Old Northeast home and a home in Lookout Mountain, Tennessee, they have roughly 100 pieces of art. Every piece they own comes from Southern artists. Tash and Emily know the story of each one. That’s largely due to Tash, Emily says.

With this type of art, there’s much to love, but one of the chief things about it the genre are the artists themselves. “That’s why I love it: the people who make it,” Emily says. “If you are driven to make art, then you can’t stop making art.”

Tash, though, enjoys drawing artists into conversations about their work, and the artists are often more than delighted to talk about it. “He’s more patient than I am,” Emily says of her husband.

Today, they own a gorgeous home in Old Northeast. They could afford far pricier work, but their hearts remain with folk and outsider art. “I just love that it’s interesting, it’s textual; you can feel the person who made it,” Emily says. “I love the energy behind it. They’re trying to get this message across through their artwork.”

And, of course, among all the art they’ve collected throughout the South, the angel from 30 years ago still has a place of honor in their home. “To this day,” Emily says, “I’m still touched.”