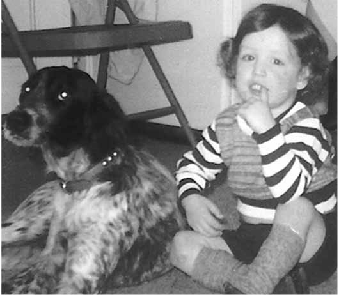 Johnny and his best friend, Matty, the Irish-English Setter.

This Christmas story happens to be true. It begins on a late December day in upstate New York in 1971. Although it was almost forty-two years ago, the images are as fresh in my mind as if they happened just yesterday.

I was a young man then, two years out of college with a wife and two sons, Johnny, almost two, and Justin, barely a month old. My life was full of endless possibilities and uncertainties. However, I was still at that age, twenty-two, where I considered myself immortal. The slings and arrows of outrageous fortune –failure and tragedy – could not touch me or my family. I was about to become an adult and learn the true meaning of being a parent all in one sudden, terrifying, precious moment.

The temperature was in the mid-thirties that morning, but the sun was shining, a rare event in Johnson City, New York. I was visiting my in-laws with my wife, Liz, and the two boys for the Christmas holidays. Liz and I were still living in Geneseo, New York where we had both gone to college. It had snowed a few days before we arrived and drifts lingered on the side of the roads, and in the backyards of the modest residential homes in the area. – Oh, I almost forgot, Matty was with us, too.

When Johnny was a year old, we decided that he needed a dog. A friend of ours, had an Irish-English setter with a beautiful auburn coat and she’d just had puppies, so we went over to look at the litter. All of the puppies, except one, had their mother’s magnificent coloring. The other one, the runt, was a spotted black and gray. We fell in love with her on the spot and took her home that very day.

There is a small dispute as to how our new addition to the family got her name.  According to Liz, I was holding the little puppy over my head as we were leaving to check its private parts. “It’s a boy.” I said, so we named him Matthew. Later, after several weeks of observation, Liz says she told me that Matthew squats to pee… to which I replied “Oh, all dogs pee that way when they’re puppies.”

My version is exactly the same as Liz’s, except Liz has the starring role in declaring the dog to be a boy. It has been over forty years since the event, and we have been divorced for many years, but neither one of us has budged one inch from our version. I will concede, however, that the distorted logic – “all dogs pee that way when they are puppies” – sounds a lot like something I would say. Suffice it to say that after six months or so, when it was clear that Matthew was never going to lift his leg to pee, we shortened her name to Matty.

Back to that late December day in Johnson City: Johnny wanted to go out and play in grandma’s backyard. Liz dressed him warm in his blue snowsuit, while Mary Jane, Liz’s mother, made him toast and peanut butter. She didn’t want her little ‘Nonny’ to go out to play on an empty stomach. The big window in the kitchen looked out on the backyard, so we could keep an eye on him as he played. Matty went out with him because Matty went everywhere with Johnny.

We were still in college and barely out of our teens when Johnny was born. The three of us learned how to raise a child together with Johnny doing the majority of the teaching. He was a colicky baby and he taught us how to survive on two hours sleep or less; how a baby is never asleep so long as one foot is still moving a teeny-tiny bit; and, just like a fence can’t hold a digging dog, a crib can’t hold a climbing baby.

We knew the latter lesson very well. Still in college, we could only afford a mattress and box springs, not the bed frame that went with it. So the mattress and box springs rested on the floor. There were many, many nights when we both were exhausted from being up half the night trying to coax this poor child with the grumpy stomach back to sleep. It’s hard to describe the relief – although for many parents it needs no description – of finally getting the baby to sleep and being able to put your head down on your own pillow. It was at that moment that Johnny taught us the greatest lessons: humility, patience and self-restraint.

At five months old, Johnny was like Houdini. He could climb out of his crib in a matter of seconds, and we never knew where he was going to be. There was no greater frustration in the world than to finally lay that child down to sleep, make it back to bed, lay our heads down on the pillow, turn to the side… and look into the beautiful, soft, smiling, wide-awake eyes of our child. I’m certain the phrase “wanting to laugh and cry at the same time” originated from a very similar moment.

Houdini showed up again that cold winter day in upstate New York. While Johnny played in the backyard with Matty after eating his toast, Liz and Mary Jane and I had our coffee and chatted, checking on Johnny from time to time by looking out the kitchen window. Our attention was diverted for a brief period. Nobody knows how long and nobody remembers the reason – although it was probably one of Mary Jane’s stories about Leroy, the family dog, or Mr. Shaw, the next-door neighbor. In any event, when we again looked out the window to check on little Johnny, he was gone. Panic set in. All three of us frantically headed for the door.

Taylor Street, where Liz’s parents lived, was a quiet dead-end street with very little traffic. However, to the right of their home, at the top of the street, was Riverside Drive, a major thoroughfare where cars flew by in a constant stream. A little boy would not do well up there. Without a word, Liz and her mom ran in that direction.

“You check the creek, Jimmy.” Mary Jane told me. I raced toward the opposite end of the street, the dead end. There was an empty lot to the right. It posed in front as a beautifully manicured lawn, but in the back was a thicket of woods and a steep embankment that lead down to the creek. At times the creek ran as high as five feet and the current was swift and treacherous. The creek was infamous on this little street: the neighbors across the street, Addie and Melissa Hayes, had a child drown down there.

That thought was running through my mind as I ran full speed across the lawn and into the woods frantically yelling my son’s name. “Johnny, Johnny! Where are you?” Nothing. I called again, fighting through the thick branches to get down the embankment. Again, nothing. Then I heard Matty bark. I called again. Matty barked again. But something was wrong. Normally, two calls to Matty and she’d be at my side. Where was she? Why wasn’t she coming? It was then that I realized Matty was with Johnny and she wasn’t coming for a reason. What that reason was, I didn’t want to think about. “Keep barking, Matty. I’m coming,” I said scrambling as fast as I could down the embankment toward the barking that only came sporadically in response to my voice. Then I was out of the woods and standing at the creek and what I saw would stay in my memory forever. 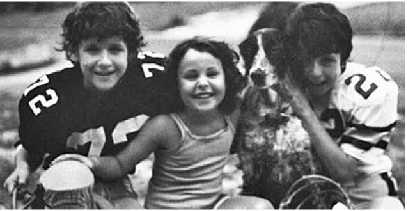 Justin, Sarah and John with their faithful friend Matty

Johnny was standing on a large chunk of ice in the creek, how he got there I could not imagine. The water was raging around him. And his dog – his wonderful, amazing dog – had his front feet on the ice and his back feet on the shore and Johnny’s arm in his mouth. Johnny only kept his balance because Matty had a hold of him. I can still picture it now as I write these words, as always, with tears in my eyes. Matty only let go of Johnny long enough to signal me with his bark. If Matty had not been there, the creek would have taken Johnny for sure.

I grabbed my son and hugged him for dear life, then carried him up the embankment and out to the street to his mother and grandmother.

As I said before, more than forty years have passed since that day at the creek. John and Justin grew up and have children of their own. Liz and I had another child, Sarah, who was born five years later. Matty was always as vigilant and protective with Justin and Sarah as she had been with Johnny.  Matty died many years ago, but she has never been forgotten. Every Christmas Eve when the family gathers, my children tell the story to their children, about Matty, the family guardian angel.