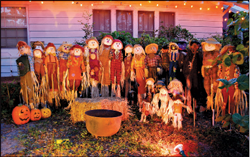 Halloween spirit and enthusiasm shine brightly in the Old Northeast.

I had been informed… I had even been warned. But none of the descriptions about Halloween in the Old Northeast truly did my first actual experience of it any justice. Neighbors telling me they gave away over 3,000 pieces of candy before 9pm – I had just smiled, made the appropriate impressed reaction, and assumed they had their zeros wrong. Nobody could give away that much candy – that would not only cost a fortune, it would require a constant stream of delivery, not the usual Halloween doorbell, grab the bowl, greet some kids, close the door routine. Surely, it was impossible. 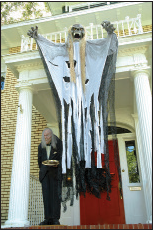 It’s been four years since my first Halloween in the Old Northeast… that day when I could barely get through the street to park in my driveway before the street was closed off… the day when I offered up a million thankful prayers that I had gone crazy on candy buying, just in case, as the 2,500 pieces I bought had all been distributed by 8:15… the day when I thankfully had the whole family in town to act as that candy distributing army… the day we walked down the street to see a show on scaffolding with fire jugglers and acrobats. That day I finally understood.

This Old Northeast occasion is unlike anything words can describe. Pictures don’t really do it justice either, just like anyone will tell you as they peruse their neighbor’s Mardi Gras photos and say in bored tones, “Yeah, wow, that’s amazing, it must have been pretty wild.” It all means nothing until the experience hits you full in the face, wallops the senses, and thwarts your concept of reality. 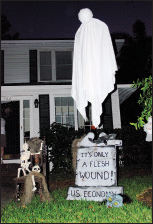 Just like an authentic Mardi Gras experience, that first Halloween was also my introduction to the non-emergency police phone number. After rooting out the guys urinating in our bushes, after the last stragglers stumbled through, after the last drunk man came up on the porch and tried to trick-or-treat for a beer, the stale taste set in, as did clean up. As I went along the property, fishing out beer cans and wrappers from the lawn, bushes, and swimming pool, I felt that the day after Halloween was another kind of neighborly bonding experience. I looked up and saw four of my neighbors doing the exact same thing. Then, I noticed with a pang, several of my decorations had been stolen.

Plenty of my neighbors were already experiencing burnout that first year I was in town. Some of them had sustained actual damage over the years, others didn’t want to spend the money and then clean up the mess, still others just didn’t like the holiday and always watched cautiously for the inevitable few revelers who got a bit too carried away. It’s a challenge, I realized, to balance the neighborhood sweetness of it with thenon-neighborhood guests, most of whom are perfectly lovely, but some of whom leave a very lasting impression. 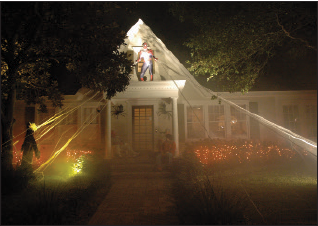 Take the man who forced his painfully shy son, in a cheap, too-small Superman outfit, to approach us long after 10pm, as we cleaned up the porch, and tried to trick-or-treat for a can of beer for that charmer of a dad. His father’s eyes were glassy – he could barely hold his head up. The intensity of this child’s embarrassment was etched into his face as his hands strangled the frayed handle of his plastic Winn Dixie bag. 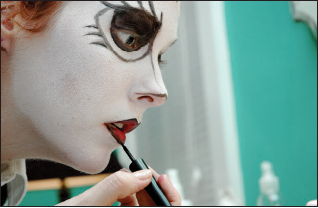 As I began foraging the house, not for beer of course, but for whatever sweets I had left (this was long after the “no more candy” sign had been posted), I found myself wondering how we could return to (slightly) simpler Halloween times, with less guests and more neighborhood-only locals. But I have to admit, after returning triumphantly to the porch to fill that frayed Winn Dixie bag to the brim, and watching the slightly chubby, sweaty, and sweet Superman’s face light up like a moonbeam – that made me forget that thought. And that was what mattered, after all – the kid who goes home happy.

Let’s face it – in Halloween terms, the Old Northeast is the neighborhood with the big candy bars. This is the code by which every clever child measures the efficiency of a trick-or-treating voyage. Having grown up in the Midwest, I tried to trick-or-treat whenever possible in the neighborhood around our town’s country club, and I was once one of those neighborhood visitors, too. And you know what – that’s probably why Halloween is my favorite holiday. The whole town made it special, memorable, generous – and fun.

While it does sometimes cause a flash of panic to see the mob of bedecked, bedazzled, small and large humans streaming down our streets on Halloween, I have to say how proud I am of the generosity the residents of the Old Northeast display to everyone on this special night. Not just generosity in big candy bars, but the time dedicated to the festivities, the decorations, the live entertainment, the cotton candy, the costumes, the characters. It takes a village to make an experience so magical, and it takes a resilient community to repeat it year after year, despite the clean up, the non-emergency police calls, the stolen decorations, and the few irresponsible adults. To create the sense of childlike wonder at any age – that’s preserving the spirit of Halloween. And it’s obvious that the residents of the Old Northeast know a thing or two about preservation. 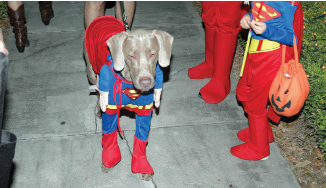 So this year, do me a favor… if you happen to see a painfully shy boy in an ill-fitting costume, clutching a fraying grocery bag in sweaty hands, give him an extra big smile for me.

The Definitive Guide to Winning the Halloween House Decoration Contest
As we approach another Halloween in the neighborhood, I’d like to turn our attention to one of the most important topics that should be at the forefront of our minds this month and next: the annual Halloween house decorating contest.

I had the privilege of speaking with Cynthia Serra, the co-founder, with Connie Lancaster, of the house judging.

“We started the contest back in the early 2000s,” Cynthia says. “As real estate agents, we would drive through the neighborhood constantly, and we started noticing how many of the houses were decorated.  In the early years of the contests, we all began dressing up as witches when it was time to go around and judge. We’d all be stuffed in Connie’s convertible bug, and we’d hear neighbors saying, ‘Here come the witches of the Old Northeast!’ It was fun.” 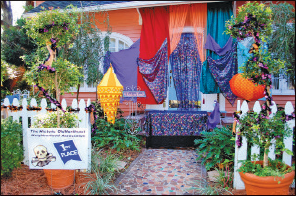 While the contest no longer boasts the prestigious prizes of yore (namely Pizza Hut gift certificates), the bragging rights and neighborhood esteem for winners are even sweeter.
As you prepare your house for this year’s contest, here are a few pointers from Cynthia: 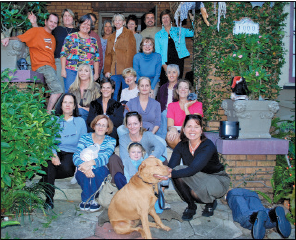 Okay, so not everyone gets a participation trophy, but make sure you keep the real spirit of Halloween close to your heart – have fun, and scare the heck out of your neighbors.