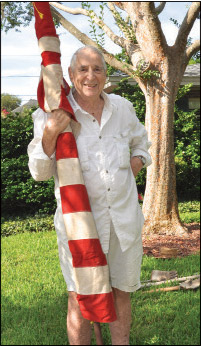 What started as a chance meeting, turned into the story of a flag, a judge, and his affection for his fallen brother. For me, it became a promising friendship.

Memorial Day morning, I was awakened by a phone call from my mother asking me to meet her to help a neighbor put up a flag. Happy to oblige, I raced over. Upon arriving, I saw an old 48-star flag draped over a tree, and I met Judge David O’Neil. The judge is a tall soft-spoken man. He walks with a cane and gives a firm handshake.

He told us that the flag was presented to his parents after the death of his brother Charles, who served in WWII. Since this was the first time the judge was going to display the flag, no structure was in place to support its weight. So I set to work on an impromptu solution.

After several failed attempts, it was obvious that I was not going to get the job done alone, so my mother, Susan, dashed off to get help. No less than three minutes had passed when Tom Moore came to lend a hand. Tom is a veteran and works in repairs and restoration – the perfect man for the job. Within ten minutes the flag was flying.

Judge O’Neil was grateful for our assistance. I returned later in the day to take the flag down. Once inside, he carefully folded it and gave it a salute. 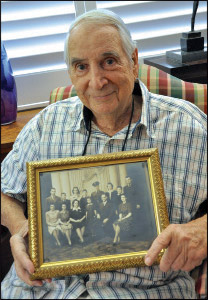 Proudly showing family photo of 12 children and his parents

Susan is the managing editor for the Northeast Journal and she wanted to have a story written about the flag. She asked me for a brief quote on what it was like to assist Judge O’Neil, so she could hand it over to one of the writers to be included in the article. She knows I am a huge WWII buff and that Memorial Day is my favorite holiday. While I was writing my quote, I kept thinking about the assigned writer and the interview they were going to conduct with the judge. I found myself becoming envious. I wanted the interview. I wanted to write this story. With Susan’s permission, I had my story, and one phone call later, I had my interview.

The judge and his wife, Barbara, live in a charming home along a brick-lined street, one of many in the Old Northeast. After we took our seats in his living room, he showed me pictures of his family and his brother, Charles. Also on the table lay a book and a handwritten journal penned by the judge himself. The interview was soon underway and I just sat back and listened to him speak. The time we spent together required little questioning on my part… it just guided itself.

Judge O’Neil and his brother grew up in a large family in Bay City, Michigan. They were separated by 10 years, Charles being the older of the two. It was the era of the Great Depression and times were hard. Instead of participating in after-school sports, Charles worked repairing buses. It was ideal preparation for what was to come.

Charles was drafted in early 1942 and, after completing basic training, was assigned to armored vehicles. For nearly two years, he traveled across the United States to train. He eventually became a tank driver. 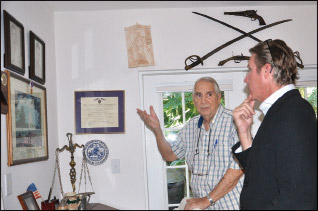 In the judge’s library, explaining photos to the writer

After arriving in Normandy, Charles served under General Patton for a short time. Later, he participated in the Battle of the Bulge, helping to secure the very northernmost edge of the front from the German counter attack.

On March 31, 1945, the 12th Army was positioned just inside the German border. Charles was not originally assigned to the lead tank that day, but due to last-minute issues, he found himself there nonetheless. As the column headed out of the assembly area about 1,000 yards shy of a crossroad, his unit came under fire by a Mark V German tank. His commander was blown out of the turret and lived to fight another day. Charles, however, did not.

The judge never forgot the day when the flag was presented to his parents at the service for his brother. Most of the town of Bay City turned out to pay their respects to Charles and the family.

With our interview nearly concluded, Judge O’Neil picked up his handwritten journal and said, “Sean, I would like to share this with you before you leave. This happened shortly before the war.” Then he read me the following story.

“The alleys in Bay City are much like the ones in St. Petersburg, and when I was 8 years old they were our playground. One day in the alley behind my house, I saw a young boy being beaten by a much older teen. The boy was taking punch after punch and not fighting back. I rushed to my house and luckily my brother was there. Charles came flying out of the back door and grabbed the bully by his shirt, and told him in no uncertain terms that he was never to step one foot in that alley again.”

The judge then closed his journal, removed his reading glasses and said, “It was on that day that Charles became my hero.” 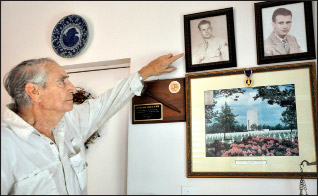 Judge O’Neil pointing to a photo of his brother, Charles

Judge O’Neil served his country in the Korean War. When he returned in 1954, he attended Stetson Law School. It was during that time he fell in love with this area. He worked in various places across the United States, but always yearned to live in St. Petersburg. For the last 23 years of his careet, he practiced administrative law and presided over disability cases. His last assignment landed him in Tampa. It was then that he and Barbara found their lovely home in the Old Northeast.

During the interview, Barbara joined us and we talked about the numerous places they have traveled around the world, and I shared some of my favorite destinations as well. Barbara is a beautiful lady and smart as a whip. The judge admitted, “I am spoiled to have her in my life.” Barbara quickly agreed.

Since that day Judge David O’Neil and I have spent time together on two occasions, and we have plans for more to come. We share a love of politics, history, travel, and books. I am very honored to know the judge and to have heard the story of his brother. Next year when I help the judge put up the flag, I will better appreciate its story. And I will remember Charles, David’s hero.