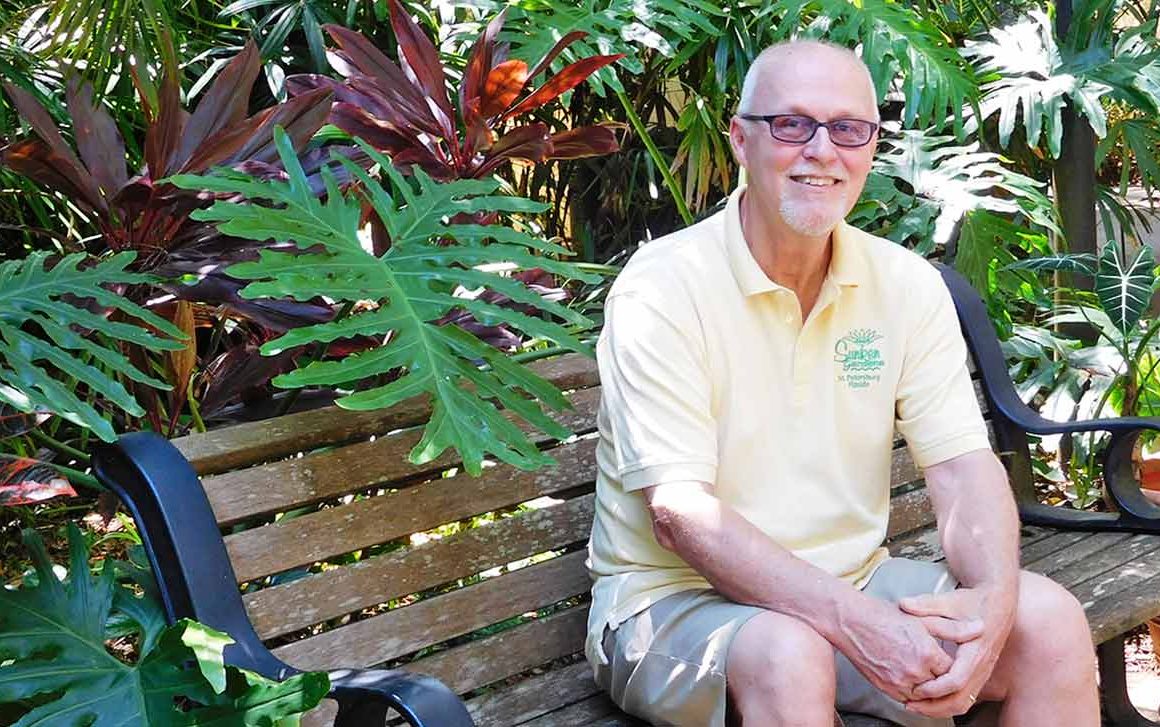 It was a flower. It was alive and wonderful. It gave the gardener hope and made him want to work even harder. And so he does – he toils day and night, tirelessly tending to his jungle of a garden. 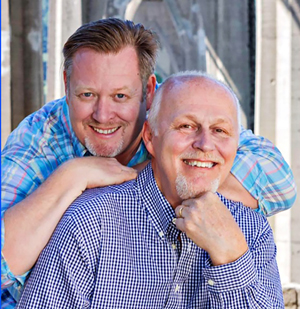 Bill O’Grady is a plant whisperer. Show him a plant and most likely he knows the plant’s common name, botanical Latin name, and country of origin. A passion for gardening runs deep. He’s also an avid collector. Which plant or flower of his favorite? “That’s like asking a parent which is his favorite child,” says Bill.

If pressed, he says his favorite is the unusual one he hasn’t discovered yet. That says a lot since Bill has lived all over the country and grown a great variety of plants. His backyard at the home he shares with his husband, Chris Stewart, a senior manager at HSN-QVC, is so lushly landscaped that to make room for more plants, he has to donate a few first.

Spending some time with Bill not only gives you an appreciation for the man, but also the role he played in shaping Sunken Gardens. Bill retired as supervisor of the historic gardens in May after a career with the city that spanned 19 years. Bill’s many fans say he helped the venue stay true to its legacy as one of America’s oldest roadside attractions, a four-acre urban oasis that drew thousands and thousands of tourists to the Sunshine City. 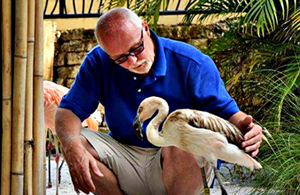 Bill with one of Sunken Gardens’ flamingoes

Most locals know the history. In 1903, George Turner bought a parcel of land from the newly incorporated City of St. Petersburg, and drained a sinkhole lake on the property to indulge his passion for gardening. The gardens grew in size and reputation, and in 1935, the venue opened to the public, setting in motion a popular tourist attraction that would last through three generations of the Turner family.

But post-Disney, the public lost interest in small roadside attractions, and the gardens fell on hard times. With dwindling crowds and lost revenue, the Turner family closed the park and searched for a buyer. Finally in 1999, the city stepped in and bought it.

According to Robin Reed, president of the Sunken Gardens Forever Foundation, the city had plans to develop the venue as a botanical garden without much thought to its role as an historic landmark. For example, plans were underway to replace the charming and funky multi-colored walkways with five-foot-wide cement paver sidewalks. But Bill intervened. “Bill realized the contribution that Sunken Gardens made to the history of St. Pete, and the importance of keeping the unusual features of the famous roadside attraction that it had once been,” says Robin. “You can find botanical gardens in any number of cities across the country, but there is only one Sunken Gardens. I can’t imagine where it would be today without Bill’s guiding hand. He has cultivated the gardens with his ideas, love, and enthusiasm.” 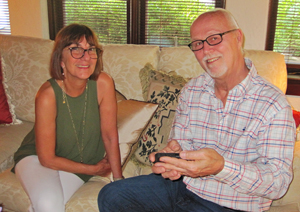 Gardens have been a interest for Bill as long as he can remember. He grew up in Boston and spent summers in Nova Scotia, where his dad was born and many family members still lived. French was their first language, so that’s what Bill spoke in the summer. “I grew up tending vegetable gardens, collecting eggs, dressing the chickens, working on the fishing boats, and watching my great aunt can everything,” he says. “One of my earliest influences was a cousin whose garden was very mathematical and scientific, laid out with straight lines and flowers planted between the rows. It not only produced food, but it was beautiful.”

Years later when Bill was living in Cedar Rapids, Iowa, he cultivated a huge 50-by-100-foot vegetable garden, harvesting so much produce he invited friends to share the bounty. At the time, he was a pre-med student at the University of Iowa, and although he loves science, Bill says he learned that a future career in pediatric medicine was not going to be his life path. Eventually he settled in Portland, Oregon, where he met his husband Chris. Bill went on to pursue a long career building a network of veterinary clinics into a multi-million dollar business.

When he wasn’t running the clinics, Bill was busy restoring their 1910 home, down to making sure the exterior paint was authentic to the original. That kindled his interest in historic preservation. He was also gardening on a grand scale with formal gardens, a rose garden, Japanese garden, bonsai garden, koi ponds, English cottage garden, and espalier fruit trees. The backyard was also filled with aviaries for his birds and lofts for his pigeons, both racers and fancy-colored ones. At one time, he had an elite racing flock of 100 pigeons, and bred thousands of finches, canaries, and other soft-billed birds. Then there’s the fish. He and Chris have had dozens of fresh-water aquariums over the years and koi ponds in the backyard. 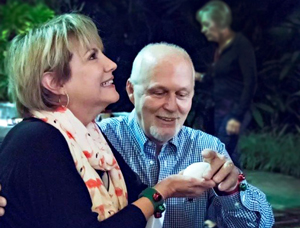 Bill retired from his corporate job in 1997, and the couple decided to leave Portland for St. Pete. They bought a home in Tierra Verde with lots of space for Bill to garden. But, after a few years, he was restless and decided to respond to a job posting for a horticulturist at Sunken Gardens. “I didn’t have the job experience, but I knew plants, “ says Bill. “When they learned about my experience with birds, they offered me a job doing the bird shows, but I was only interested in working as a horticulturist. I figured that’s that, but the next day they called and offered me the position.”

In 2000, the gardens were just beginning to be revived after several decades of disrepair. Bill oversaw the pruning of plants-gone-wild and began reshaping the planting beds, but he also agreed to do the bird shows and took on some of the garden tours. Of the many tours he conducted, a few stand out, such as one he conducted for the wives of military officers from around the world who were stationed at MacDill’s Central Command, and another for visually impaired children – “we focused on the scents and the textures,” says Bill. “I had them place their hand on a lily pad to feel the buoyancy of the water.”

Restocking the flamingo flock a few years ago was a high point as well. Bill flew to Texas to spend a few days at the San Antonio Zoo with the birds, still babies, so they would get to know him and be less traumatized by the move to a new location in a new state. He also helped publish a guide to the Garden’s plants and history, and a second book geared to Pinellas County grade-school children. 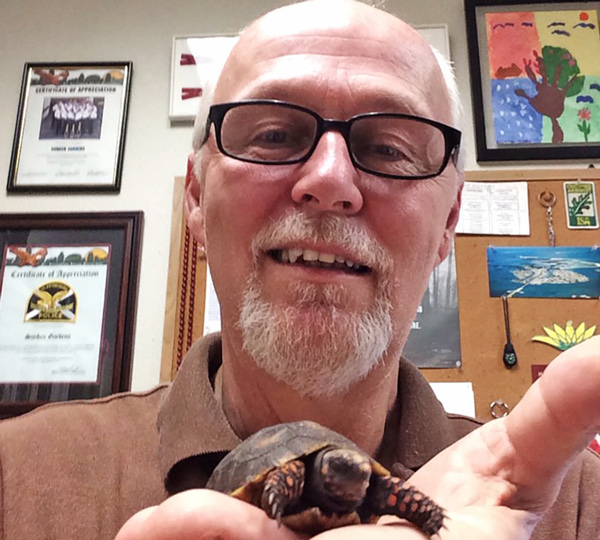 Planning for the Future

But, he says one of the most significant accomplishments has been the development of a master plan, along with a cultural landscape report. “You can’t know where you’re going with out a map,” says Bill. The master plan guides the future of the gardens and the cultural landscape report provides recommendations for helping the venue stay true to its historic roots. “I wanted the gardens to look like George Turner had them in the ’50s and ’60s,” says Bill. “Sunken Gardens had a big influence on tourism and the growth of St. Petersburg. It was very forward thinking of the city to save this jewel.” 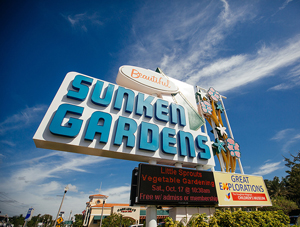 In the last eight years, Bill says many of the action steps outlined on the master plan and cultural landscape plan have been accomplished. Still on the drawing board is a children’s garden to be cultivated behind the amphitheater. There are also plans for the amphitheater to become a soft-billed-bird aviary, and for the original concrete animal enclosures to be rehabbed and brought up to current-day standards so they can house the parrots, macaws, and other big birds.

A Sunken Gardens historical museum is in the works, too. The original public entrance to the attraction – a 1940-era building that currently serves as the bird-care headquarters – will be converted into a small museum, complete with old films (recently converted to DVD) and hundreds of Sunken Gardens’ collectibles like pennants, post cards, creamers, snow globes, shot glasses, and dinnerware – much of it from Bill’s own collection that he purchased from eBay or received from friends. “Over the years, everyone figured out that Bill likes to collect things,” he quips.

Retiring from a career you love is never easy, but it’s “time to pass the torch and let someone else take it to the next level,” says Bill. “I never dreamed working here was something I would do, but it was like all my life experiences had groomed me for the part – I love gardening, I love birds, and I love historic preservation.”

Sunken Gardens is the better for it.