If These Walls Could Talk: Reviving a Piece of History 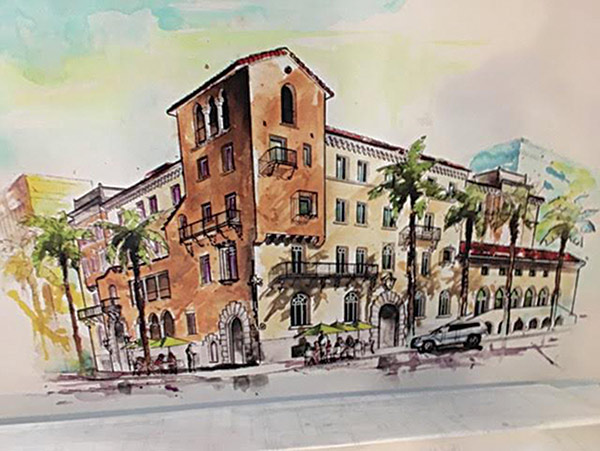 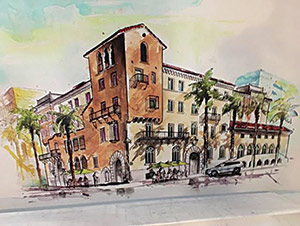 Rendering of the next chapter in the life of the YMCA

A building’s identity is not characterized solely by its architecture or construction.

More often than not though, a city’s structures outlive the public they serve. Built in 1927, the Historic St. Petersburg YMCA was a flourishing center of activity for the community.

So, if in all its majestic beauty, the building could recount thousands of stories, what would they be? Would they include the laughter of a little girl at a swim lesson with her parents? Melodic chirps of sneakers synchronized with rhythmic dribbling echoing through the gymnasium? Intense badminton and racquetball matches between circuit judges and attorneys at lunchtime? Lively socials where young men and women gathered? Quiet breaths from a weary traveler resting in a room? Major events are recorded in history, but what happens to the more personal, intimate stories of individuals?

The Evening Independent’s coverage of the YMCA Opening

On June 20, 1920, a group of St. Petersburg businessmen formed the first YMCA in the city. With a goal of raising $550,000, the community was able to come up with the funds for construction entirely through donations. The iconic swimming pool, touted as ‘one of the finest in the South’ and home to hundreds of aquatics programs, was almost eliminated from the original plans because of a funding deficit until Mr. David S. Welch donated an additional $10,000 to see the project come to fruition. Aptly named, the David S. Welch Natatorium has been one of the most prominent fixtures of the Y throughout its history.

Promissory note to fund the construction of the YMCA

The building was thoughtfully designed in the Mediterranean Revival architectural style by Clarence J. Brown of Woolpert & Brown. Details such as arched doorways adorn the entryways to various rooms. Wrought-iron light fixtures, ornate fireplaces, and Aztec figures illustrated on cypress beams decorate the men’s and boys’ lounges. The varying heights of the patio walls allow the morning warmth from the East to blanket the area during winter months, while blocking it from the sun’s intense afternoon heat. Even piquing interest on the national stage, the Y was written up in a May 1928 issue of American Architect and Architecture magazine. James B. Tracy wrote, “The St. Petersburg YMCA is a ‘citizen factory’ with an air of intimate charm, and its presence here is a material promise of the development of an adequate regional architecture, an architecture adapted to the setting and the climate.” 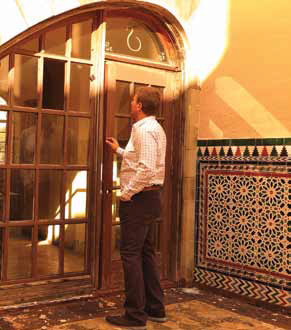 Nicholas Ekonomou examining the panes of the entryway

Almost 90 years later, in the midst of another growth spurt certain to become part of St. Petersburg’s rich history, the YMCA on 1st Avenue South and 5th Street is undergoing change once again. Since closing its doors and relocating to Central Plaza in 2001, the future of the historical building has been uncertain, changing ownership multiple times with varying plans for its purpose. But in November 2014, Nicholas Ekonomou emerged as the newest owner, paying $1.4M for the property after years of contested litigation with Thomas Nestor, music promoter, the previous potential buyer.

Throughout the years of uncertainty, concerns were raised regarding the types of changes that could be made to this property. In 1991, the St. Petersburg City Council listed the Mediterranean Revival building in the St. Petersburg Register of Historic Places. Allaying any concerns, Ekonomou is certain, “I don’t think that structure would ever be razed. There’s just so much potential.” 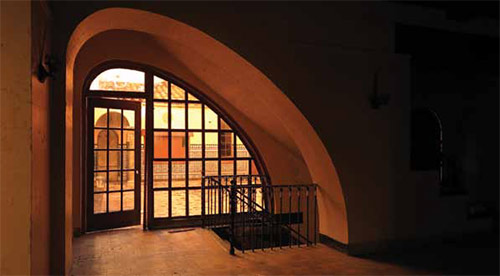 Arched entryway out to patio

With a strong interest in the past, he says he enjoys, “anything that has written history and paves the way for who we are and where we come from. The building is so beautiful. And, it’s helped a lot of people. It’s pretty incredible to be able to own something like that.” He was first interested in purchasing the structure back in 2008, but cancelled it because of concerns with the economy. With his experience as a developer, he is also practical. “Does what I’m thinking make dollar sense, and is it a viable project?” 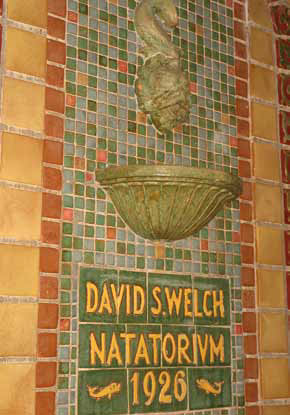 The Edward – to be named in honor of his grandfather – will consist of a luxury boutique hotel, café and bar, restaurant, and a large private event space. The gymnasium will be converted to a ballroom with the highest ceiling in downtown St. Pete, perfect for weddings, charity events, fundraisers, and concerts. “I remember taking vacations going to my grandfather’s house. It was always nice and cool and green. And that’s the same feeling I have when I come to St. Pete.”

Ekonomou is taking great care to preserve as many of the original features of the building as possible, from the swimming pool tiles, to the Spanish tiles decorating the lounges and patio, and the terra cotta roof. He has found a company specializing in creating replicas if any originals need replacing. A new nine-story tower, to be built adjacent to the existing structure to house 40 additional hotel rooms and a rooftop terrace, will also be designed to match the aesthetics of the historical building. He has also sparked the interest of Kimpton Hotel and Restaurant Group, known for their trendy boutique hotels.

However, the new owner is going a step further. Not only is he interested in maintaining the architectural integrity, he is also creating a narrative of the restoration process, and trying to recapture memories and revive stories of the past. Ekonomou explains, “I’ve never done something of this significance to a building that means so much to a community. I’ve restored homes, but nothing this big that touched so many people’s lives. I thought it would be interesting to film and to document the renovation process.” As he is drawing primarily from local talent and expertise, he says, “I also wanted to give credit to all the builders and vendors involved.” 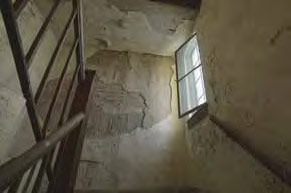 He commissioned Ben Daniele and Doug Tschirhart, owners of Scatter Brother Productions, a media and video production company based in downtown St. Petersburg, to catalog and produce a feature-length documentary about the project. The film will examine the history, the period of decline, and the restoration of the YMCA. They are actively seeking former patrons of the Y to share their memories for the documentary. Daniele remarks, “The stories we hear during the interviews are really remarkable. This building left such an imprint on the community. Literally, everybody seems to know about it [the Y] or seems to know somebody who was there. This is such a connected town.” Tschirhart adds, “I love the history of the city. It’s been very interesting hearing the stories not only about the YMCA, but about the city and how it’s transformed over the past 90 years.” Filming primarily takes place on site and they have already conducted over 25 interviews, but continue to look for more.

The two were freelancers in the film industry and met each other on a movie set in 2007, Daniele as assistant producer and Tschirhart as assistant director. They teamed up in 2008 to form Scatter Brothers simply as a hobby to work on what they called their ‘passion projects.’ By 2012, they noticed that there was a significant amount of brand recognition and Scatter Brothers Production became a very viable business operation. They have produced commercials, product videos, and industry-specific training videos, but Daniele explains, “We always try to bring a fresh new view of cinema.” 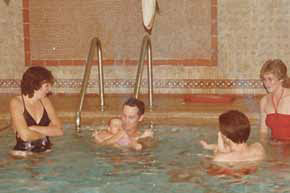 Since its opening, the YMCA building has been home to various organizations, and served a multitude of purposes. Beginning as a strictly a men’s organization, it held father-and-son programs, night-school classes, and summer camps. The programs flourished during the ’50s and ’60s after The Depression and difficult economic times of the ’30s. In the 1960s, they offered membership to women and girls.

Many professionals spent their lunchtime participating in the new fitness movement sweeping the nation in the ’70s. The badminton courts were regularly bustling with activity as circuit court judge Mark McGerry, Jr. and state senator Henry Sayler could be found locked in an intense match during their lunch hour. 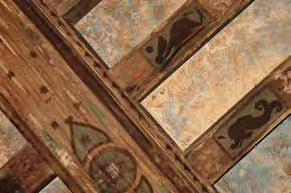 The natatorium has launched many a swimming-related career. In 1983, Dan and Patty Nardozzi were looking for a drown-proof swimming program for their daughter Kristen. “The Y was the only place that took 6-month-olds at the time,” explains Patty. Taught by Jo Ann Harrelson of Shore Acres, Kristen went on to get a full swimming scholarship at the University of New Hampshire, coached at the University of Connecticut, and is currently a sales representative for Speedo. Harrelson and the Nardozzis continue to swim competitively with the St. Pete Masters swim team.

Extending beyond the fitness realm, the building even served as a bomb shelter in the 1960s, and the gymnasium was a set for the murder mystery film, Hidden Fears, released in 1993. 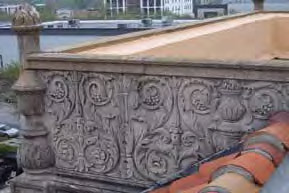 Detail designs on balcony of the rooftop

The historical building will live on as it undergoes a revival, entering a new chapter in its already-colorful history. It will once again be a bustling center of activity in downtown St. Petersburg, and the Scatter Brothers will be there to record more history in the making. Nicholas Ekonomou looks to the future, “We will continue the longstanding tradition of touching many lives in the community, with wonderful, happy, and fulfilling experiences. And we will give all who visit, the opportunity to share in our amazing history and in all the building’s splendor.”

So, the question is, what stories will the walls of The Edward eventually share? The possibilities are limitless, but the city will soon have a beautiful venue where new memories can be made again.

For those interested in sharing their memories of the YMCA in the documentary, please email mailto:info@scatterbrothers.com. Special thanks to the St. Petersburg Museum of History for sharing their archives and helping with the research.