Imagine Getting Paid for Your Hobby 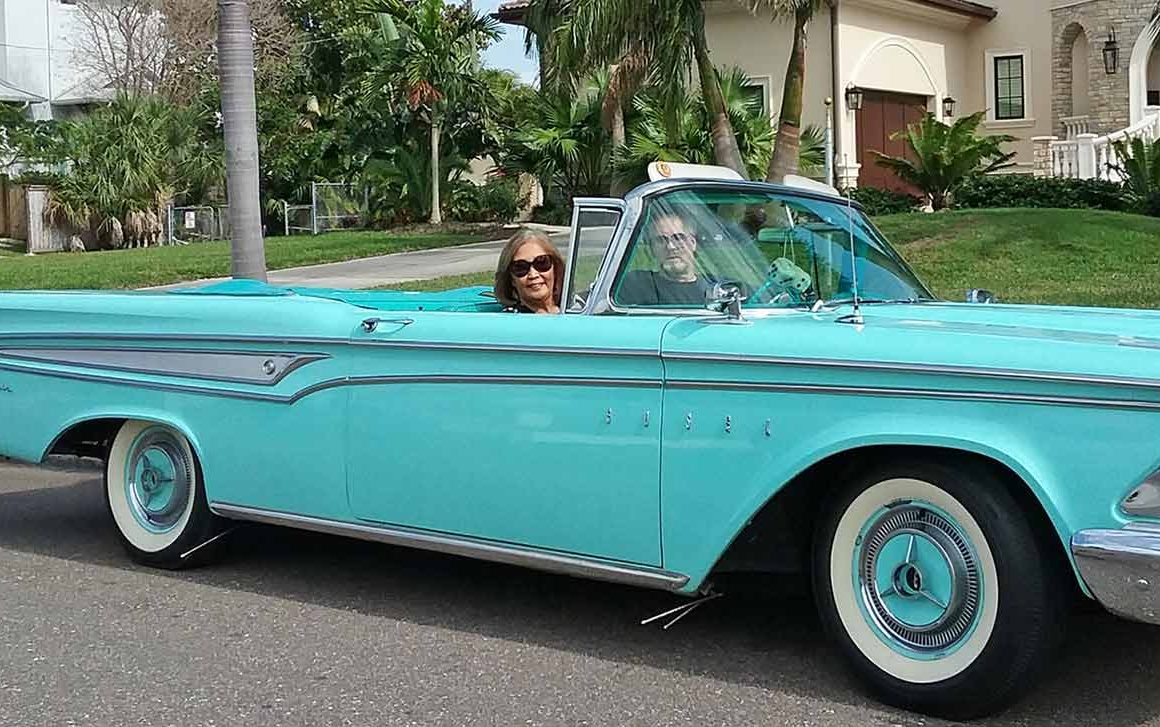 Imagine getting paid for your hobby. Shore Acres resident John Satino does just that. He’s a car guy from way back in his childhood, hanging out in his stepdad’s garage, and later fixing cars needing a lot of work, which he bought from the ‘back lot’ of the local Chevy dealership and then sold for a profit. He was changing out engines and transmissions even before he had his driver’s license in his original state of Ohio. Since 1984, his car collection has been featured in numerous television and movie productions, sometimes generating a nice daily stipend, though clearly John would collect cars with or without the added attention.

John’s current collection consists of “about 20” cars, including Bentleys, Ferraris and a Hummer. He keeps about 10 of them at his “custom-built for vehicle-storage” stilt home in Shore Acres. This is how he came to own one very famous Edsel – the vehicle with huge marketing excess that turned sour for Ford Motor Company when consumers realized the cars were lemons.

Rosemary Clooney – a popular singer in the early 1950s and aunt to the handsome movie star George – was recruited for a one-hour variety show TV special to promote the car’s introduction. The cars were so hurried  to market that some cars were even shipped from the factory before they were completely assembled, arriving at dealers with instructions to install wipers or whatnot. From Rosemary Clooney’s book, Girl Singer, she tells of an embarrassing incident reflective of the cars’ woes.

“The only Edsel I ever saw was the one they gave me to drive while I was rehearsing. I came out of the CBS Building, up those little steps to the street where my purple Edsel was waiting, like Normandie in drydock. Mr. Ford was right behind me, heading for his Edsel. I opened the door of my car and the handle came off. I turned to him, holding it out to him. “About your car…”

The cars were marketed as a bold new design, and featured a distinctive vertical grill, flared fenders and a host of new gadgetry including a push-button ‘teletouch’ transmission control on the center of the steering wheel.

The Edsel Show – featuring Clooney, Bing Crosby, Frank Sinatra and other big names – was all about marketing the car. The announcer crooned his adoration for the car after each entertainment segment, using explicit descriptions such as “amber-red-and-white exterior” to overcome the shortcomings of black and white TV viewing.

Ultimately, the cars were judged ugly, too expensive and poorly made. They were only produced for two years. A nightmare for Ford Motor Company then – but a future fairytale created for car collectors. The cars were produced in limited supply, uniquely designed, and a handful had the added appeal of star power having been owned by a celebrity.

Rosemary Clooney was born in Maysville, Kentucky, in 1928, and was considered a local celebrity to nearby Ohioans, including John. Of course, John didn’t want just any Edsel, he sought the Holy Grail… the very car owned by Rosemary Clooney the day she so famously uttered her snarky remark to industrial titan Henry Ford II, grandson to the late great company founder.

In his primary business, John – who is a biomedical engineer and has consulted for NASA – owns and operates Laser Hair and Scalp Clinic in Clearwater. He has been a respected professional in the hair rejuvenation and replacement field for decades. Many of his clients have famous names, and he shared stories about them, their cars, and the friendships he developed over the years.

John divulged that his usual daily drive is a customized 2018 GMC four-door pickup that had been built (though not delivered) for his longtime friend and client, the late actor Burt Reynolds.

In 1996, with the help of the Rosemary Clooney Museum in Augusta, Kentucky, John successfully tracked the 1959 Edsel Corsair Convertible to relatives of Clooney in Ohio. It was completely original, not restored, though it had one repaint about 20 years previous to his ownership. The family who owned it loved the nostalgia of the car, though it was impractical and they didn’t enjoy driving it.

John enjoys driving the famous car around town with his wife Lien and their dog, Mino. By far one of the most unique features is a 45-RPM record player under the dashboard, outfitted with a long cord so the player could be carried out of the car to a nearby picnic table or wherever people gathered. Now, John says young people are perplexed when they see the strange, oversized CD player in his car playing Rosemary Clooney’s Mambo Italiano.

Editor’s Note: We appreciate John reaching out to the Northeast Journal after reading the story about Lois and Mike’s 1957 Morgan Plus 4, Speechless. Many of John’s classic cars have played starring roles in movies, TV shows, music videos and ads. Over the decades, when Hollywood needed a distinctive car, they’d call John. And if he didn’t own it, he’d track one down. In addition to the Edsel, he owns a Ferrari from the TV show Miami Vice, a Pontiac Firebird Trans Am from Smokey and the Bandit II starring Burt Reynolds, and a Volkswagen Beetle from Herbie Fully Loaded. The movie Dick Tracy starring Warren Beatty featured his vintage Duesenberg – the same car he used to chauffeur TV star Mary Hart in when she came to town as grand marshal of the St. Pete Grand Prix.