January 13, 2022by Will MichaelsNo CommentsAll, History 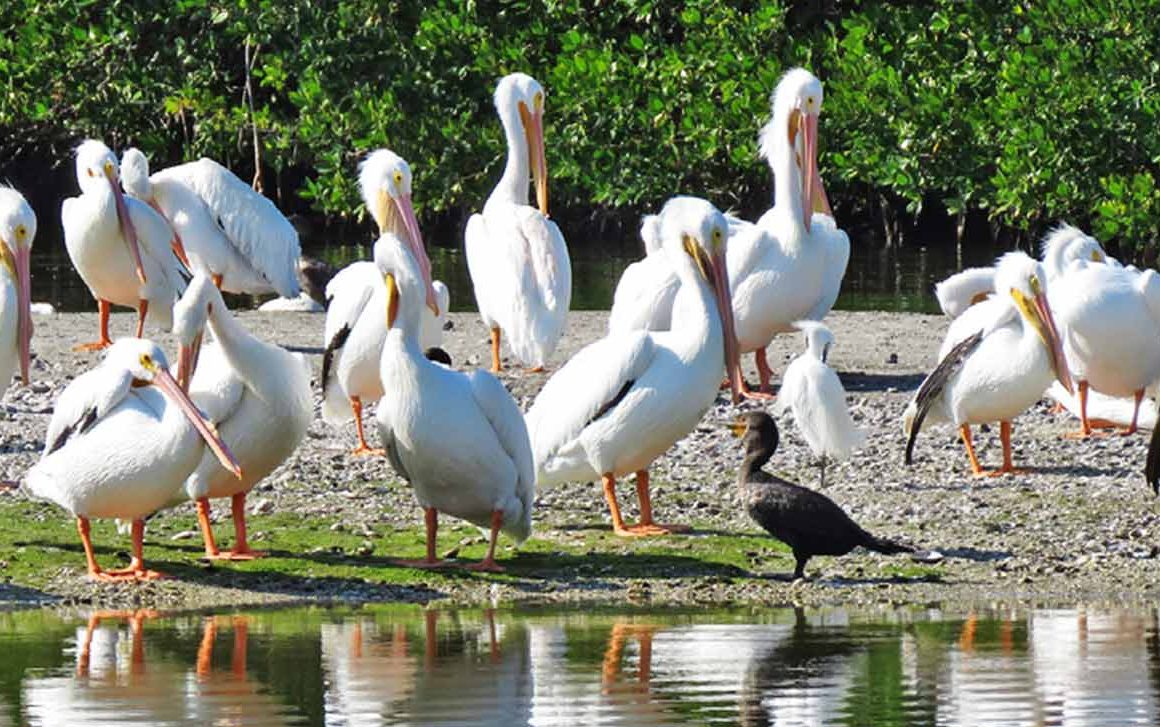 Many birds in St. Petersburg were on the verge of extinction in the late 1800s. This was because their feathers had become unbelievably valuable. For example, the snowy egret’s fluffy mating feathers fetched thirty-two dollars an ounce – the same as the price of gold. Feathers had become quite fashionable, especially when displayed on women’s hats. The throat pouches of pelicans were made into tobacco pouches. There was even a market for wild bird eggs. The killing of birds for their feathers had become an industry for many hunters. And one of the most notorious of these was Jean Chevelier.

Chevelier purchased property in the vicinity of what is now Maximo Park in south St. Petersburg in the late 1870s and set about killing birds. Frenchman’s Creek is believed to be named after him. In just one season, Chevelier and his employees obtained 11,000 bird skins and plumes and 30,000 birds’ eggs. Chevelier quickly depopulated the immense bird rookeries that existed at that time in the vicinity of Maximo Point. About 1882, he moved on to new killing fields in the Everglades near Miami as well as the Ten Thousand Islands south of Naples. While plume hunting was legal in the late 1800s and hunting in general was common, even Chevelier’s contemporaries abhorred his decimation of the bird population. John Bethell called Chevelier the “worst scourge that ever came to Pinellas Point.” Plume hunting continued into the early 1900s. As late as 1916, it was reported that plume hunters had shot up Alligator Bay near Port Charlotte and then burned the trees there to force the birds to nest in more accessible areas in the future. At the time Alligator Bay was considered the most important Egret rookery in Florida (and the US). But, despite the carnage caused by Chevelier and his cohorts, the wild areas near St. Petersburg eventually recovered. Bird Key became the major rookery for pelicans. Cormorants and blue heron were also abundant.

The exploitation of wild birds of course was not just happening in St. Petersburg. It was a matter of national concern, and one of those most concerned was President Theodore Roosevelt. Roosevelt – known as the ‘Great Conservationist’ – was fascinated with wild birds from his youth and most keen to protect them. Another area ransacked by plume hunters was Pelican Island on Florida’s Indian River. In 1903, Roosevelt designated Pelican Island as the first federal Bird Preservation Area, forerunner of today’s National Wildlife Refuge System.

Roosevelt’s designation of Pelican Island as a Bird Preservation Area on Florida’s east coast struck a chord with folks in St. Petersburg. In particular, it got the attention of Roy S. Hanna, St. Petersburg’s postmaster. In addition to his duties as postmaster, Hanna was also a city activist helping to boost the city as a natural paradise attracting tourism, and he was a conservationist, helping to found the Audubon Club. The earliest account found of the origin of the Bird Key federal sanctuary – now called Indian Key – is provided by historian Hampton Dunn (1973). “The wanton destruction in the 1890s had been witnessed by Roy S. Hanna… Hanna thought up the idea of a sanctuary. So he took steps to buy a small island, Indian Key, which belonged to the State of Florida. In 1902, he learned that the federal government wanted the island as a bird reservation. He corresponded personally with President Theodore Roosevelt and turned over all his rights to the island – which is now appropriately called Bird Key…” However, federal designation of Bird Key as the “Indian Bird Key Reservation” did not occur until 1906. In 1921, the keys known as Cow, Calf, and Bush also were made a part of Indian Key Bird Preservation Area by executive order of President Warren G. Harding.

In 1909, the St. Petersburg Audubon Society was established with conservationist Katherine Bell Tippetts as first president. Roy Hanna is reported to have also been prominent in the Society’s formation. The Society was active in promoting protection of Bird Key, and also used the Key as a way of educating the public regarding the importance of bird wildlife. Frequent excursions were made to the Key. An account of one such excursion held in 1915 reads, “boats were taken by the party which was rowed around inside the amphitheater-like home of the sea fowls. As the sea birds arose from the mangrove trees, snap shots were taken of them in flight.” Prominent ornithologists were brought to Florida by the Audubon Society. One was Herbert K. Job, State Ornithologist of Connecticut. In 1915, he visited Bird Key, after which he went to Breton Island, Louisiana, where he joined former President Theodore Roosevelt for a tour of another bird reservation there which Roosevelt had created.

Designating Indian Key in 1906 as a federal bird reservation was not in itself sufficient to protect the wildlife. For example, in 1919 the Times reported, “With a stringent law against killing birds, the rookery at Bird Key has recently been depopulated nevertheless. A schooner loaded with sportsmen landed there the past week and about completed the job. Bird Key should be carefully protected from these depredators.” Exactly when game wardens were first appointed to guard the Key is unknown. However, it was reported in 1922 that Captain B. F. Pacetti, “inspector of federal migatory [sic] and preserves” posted Indian Key and other nearby islands closing them until after the nesting season. The appointment of reservation wardens was also noted.

It was not until 1950 that the Key became officially known simply as Indian Key. That year, the U S Board of Geographic Names declared the island was to be known as Indian Key, “not Big Bird Key, Bird Key, or Little Bird Key.”

In June of 1955, developer Hyman Green and his associates proposed a toll road and causeway to run from Maximo Point to his proposed development at what is now Tierra Verde. The causeway would be anchored midway at Indian Key. As historian Dennis Whelan recounted in his new book The Pinellas Puzzle, Green proposed a segregated African American beach to be located on Indian Key. He made his pitch to St. Petersburg city government, in return asking them to obtain release of Indian Key from the federal government. (Interestingly, the proposal for an African American beach at Indian Key was made at the same time that segregated beaches in St. Petersburg were being contested by civil-rights advocates.) Green also promised to bring his proposed development on Pine and Cabbage Keys into St. Petersburg’s city limits, thus increasing the city tax base. However, at that time, Indian Key was owned by Pinellas County. In 1955, the state had conveyed Indian Key to Pinellas County as part of 5,000 acres of submerged lands and uplands to be used solely for non-commercial recreational purposes. At what point federal ownership had been conveyed to the state is unknown. The Indian Key bridge and causeway proposal was shortly replaced with the Bayway Plan which led to today’s Bayway access to Tierra Verde and Fort DeSoto Park.

But, it was not until 1964, at the request of the St. Petersburg Audubon Society, that the Pinellas County Commission voted to rededicate Indian Key and also Bush Key to their original status given them by President Roosevelt. The Times noted, “They are the last remaining wild islands in Boca Ciega Bay, and almost the only ones on this part of the Gulf Coast. Without them as nesting sites, entire flocks of the unusual and exotic birds, such as the white and brown pelicans, white ibises, egrets and spoonbills, must be lost to the entire county.”