Inside and Underneath the Historic Home of Rachel and David Wein 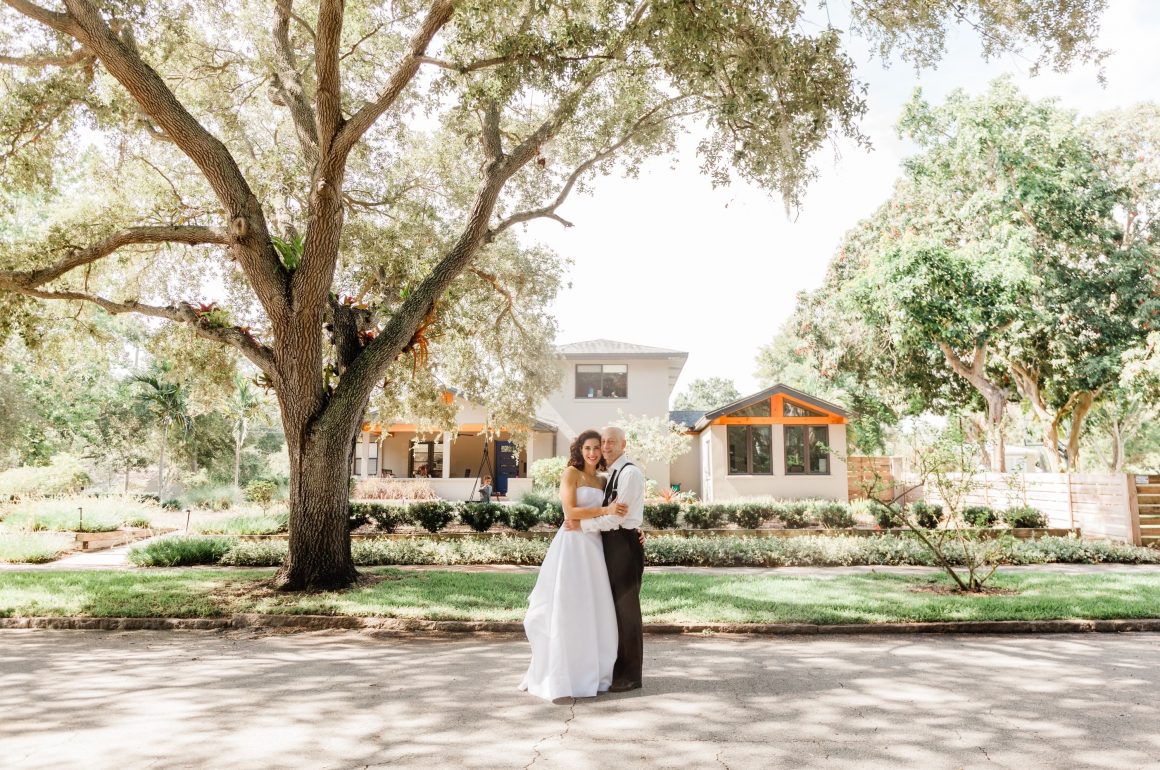 Who doesn’t love to peek inside other people’s homes? My husband knows I’m far more likely to join him to walk the dog at night, when I can see into people’s lighted living rooms and kitchens. There’s something about getting a glimpse into other people’s lives; seeing their choices in paint colors, art, and books. Whether they’re watching PBS or Bravo. The best is when I see a kitchen that’s messier than mine (a rare occurrence).

I’d been wanting a look inside the home of David and Rachel Wein (rhymes with Queen) ever since I’d learned that it had been built by George and Eula Turner, the founders of Sunken Gardens, and is one of the handful of houses in the city that has a basement. An acquaintance from the world of parenting in St. Pete, I bumped into Rachel while out walking our respective dogs, and I mentioned my interest in her house. After she told me that the Turner family used to divvy up the daily proceeds from the popular roadside attraction in the basement, I dropped some not-so-subtle hints about how much I’d like to go inside.

So, one recent December day, Rachel generously invited me over for a cup of coffee. I pretended to check my calendar and then ran right over.

Remember that feeling of satisfaction I mentioned when I see a kitchen that’s messier than mine? That didn’t happen at Rachel’s. Rather, it was like walking into an issue of architectural digest, and then having coffee with its brilliant and fascinating editor. Instead of gloating over my superior housekeeping skills, I walked out questioning all my life’s choices. I kid, but Rachel Wein and her husband, Dr. David Wein, just might reduce George and Eula to the second most interesting couple to live in the home. And their house is a perfect blend of modern design and historic ambience.

Built in 1950 for George Turner Sr., directly across the street from the original front gate of Sunken Gardens, the home’s proximity to the popular attraction means it benefits from a unique geographical quirk. The road that it sits on,18th Avenue North, dead ends behind Sunken Gardens’ parking lot, meaning cars can’t use it as a thru-way to 4th Street. But the charming gate that borders the parking lot means that pedestrians can. This shaded, quiet nook of a street feels, as Rachel told me, “both secluded and urban. It’s so close to so much, but also tucked away and hidden.” The Weins three kids can ride their bikes safely on the quiet street, and their parents can slip through the gate for a quick bite on busy 4th Street.

Remember that basement I mentioned? It was even cooler than I’d expected. I’ve never actually been in a basement in St. Petersburg, not even the most famous one, in the Snell Arcade. We all know the reason we don’t have basements: flooding! But the Wein’s basement has never had water in it, and it was full of all the things I keep in my garage, which prevent me from keeping my actual car there. It’s fitting that George Turner, a plumber who drained a series of sinkholes to create Sunken Gardens, built a home with a dry basement.

The Wein’s basement is said to have been used for counting and dividing the day’s take from Sunken Gardens. George Sr. and his wife died roughly a decade after building the house, and ownership first passed to their daughter and later, to their grandson Jim, the child of their son Ralph. Jim and his two brothers had taken ownership of the Gardens in 1979, and I suspect it was these three brothers that were divvying up the day’s proceeds. It certainly felt like Fort Knox in the cement block basement, a perfect place to count money. I couldn’t help but think that it also would serve as a great deterrent to my misbehaving kids. But I digress.

When the Weins bought the house about a decade ago they wanted to brighten it up and add a workspace for Rachel. They vaulted the ceiling in the living room and added a 400-square-foot detached office next to the main house. Combined with Rachel’s impeccable taste, honed during her years at the University of Florida’s School of Architecture, the subtle changes made a world of difference in the look and feel of the home. The living room is light and airy, and the mid-century furniture adds to the sleek, yet warm aura.

Rachel works from the detached home office. She likes that she has to walk outside and into a different building each day – a nice separation between her work and personal life. She may work from home, but that work is anything but local. Rachel is a strategic advisor to large owners and operators of real estate, mainly “essential retailers,” a phrase we are all familiar with after pandemic shutdowns. Think grocery stores and other “everyday necessities operators.” She travels extensively – New York, Chicago, even Hawaii. Previously she worked for Ernst and Young (now known simply as EY) in their global real estate practice, where she advised large owners and operators on commercial real estate strategy. Her undergraduate and graduate degrees in architecture, paired with an additional graduate degree in finance, prepared her well for the work.

When she’s not on the clock, Rachel invests her volunteer time in the Tampa Bay International School, a Spanish-language immersion school that two of the Wein children attend. She notes that the “diversity and social justice mission of the school is very important to us.” The school also happens to be the only school in Pinellas County that offers Jewish studies as an optional part of the curriculum for the elementary and middle grades. The Weins firmly believe that language and cultural experiences are a gift that you can give to your children, and the school reflects those values.

David Wein is the kind of person you hope to meet at a neighborhood porch party, and not through his line of work. Since 2007 he’s been the Chief of Emergency Medicine at Tampa General Hospital. The past couple of years have presented a unique challenge, with David skillfully overseeing the COVID response in the hospital’s ER, a monumental task for which no one had a road map. He has tried to balance his professional endeavors with community activity, serving on numerous local COVID task forces at schools and a skilled nursing facility.

Rachel and David strike me as the kind of couple you’d meet in Manhattan or Boston, with their impressive resumes and stylish home. But they love living in St. Petersburg’s Old Northeast neighborhood. So much so that when their neighbor demolished his home after it was crushed by falling laurel oak trees during Hurricane Irma, the Weins jumped at the chance to buy the empty lot next door. They recently hired Storyn Architecture to design a home for their family next door, thinking they would ultimately build it several years from now. But Rachel told me that the design was “so beautiful that we couldn’t help but build it now.” They expect work to begin next year.

The Weins were very intentional with the design of the new home, using elements that would be “in keeping with the neighborhood, but most specifically this block.” On the other side of the lot sits a mid-century home designed in 1957 by renowned local architect William Harvard, for George Turner, Jr. The Weins wanted to honor the mid-century heritage of the block, but keep with the more traditional feel of the neighborhood. Rachel notes that the home will have a traditional roof, and feature stucco, terrazzo, and wood elements. She says, “It’s our intention to be in keeping with today’s aesthetics, but to be respectful of the history of the neighborhood. Most specifically, we want to be in context with this street, the Turner family, and Sunken Gardens.”

I am certain George and Eula Turner, hard-working entrepreneurs with a sense of the importance of beautiful surroundings, would be thrilled with the family that now calls their house home. Rachel and David Wein continue the Turner’s tradition of improving their corner of the world, both aesthetically and through their contributions to the community. I appreciate Rachel’s generosity in satisfying this looky-loo’s curiosity about her unusual home. Maybe everyone else in the neighborhood could do me a favor and just leave their drapes open at night.

Read more about George and Eula Turner and the history of Sunken Gardens here.