It Takes a Village to Build a Shed 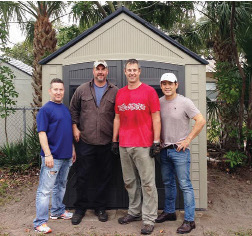 Finally the season had changed in Florida! It was crisp, sunny day in early November and I was outside enjoying the fresh air while building a new shed in my backyard. My neighbor, Donna Carpenter, was also out in her backyard and she came to the fence to admire the large plastic shed I was finishing up. We began chatting and she told me that she would like to get a plastic shed. Her old aluminum shed was damaged in a storm last year and had to be taken down. The contents of said shed were piled on her pool deck and in her dining room. Her husband Tom had just returned from a stay at the VA hospital in Tampa. Donna began telling me about the difficulties she was having in getting a nurse to come out after his stay. He needed his wounds packed and redressed three times a week, and he hadn’t had a visit yet despite being home for two days already. I am a registered nurse, so I offered Donna that I could come over to do the dressings if she didn’t hear from the home health nurse.

Tom Carpenter was a welder in the Vietnam War. He welded on an airstrip where, unbeknownst to him, Agent Orange canisters had been buried. It wasn’t until around the year 2000 that he began to experience the effects of Agent Orange. Diabetes has taken one of his legs and he is chair-bound. He now has wounds on his remaining leg and has other health issues with his liver. His wife has health concerns of her own. 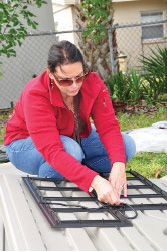 They are both very nice neighbors. After Donna went back into the house I decided that I would get them a gift card to Lowe’s to put toward a new shed. It was the least I could do for a man who had given so much of his life to serve our country. But, then I thought maybe others would want to contribute. I wrote a status on my Facebook page describing my plan, and asked if any of my friends would like to contribute so we could provide more funds for their shed. A friend from Idaho sent me some money. But then I received a text message from my friend Phyllis Gagliardo. Phyllis lives on Snell Isle and owns Scrubs and Duds on Fourth Street N. Her dad is a Vietnam Veteran and she has many veteran connections, and said she knew a group who could help us build the shed. After a few discussions, we decided to go to Lowe’s to see if they could give us a discount on a shed. Since Veteran’s Day was coming up, we thought this would be a wonderful thing to do for Tom and Donna.

Phyllis and I were a little nervous as we entered the Lowe’s location on 22nd Avenue North, but we were determined to make this happen. As if orchestrated in heaven, the assistant store manager in charge of the shed department, Terrence Klock, was standing by the door. After explaining the reason we were there, Terrence took us back to see the sheds he had available. I explained that I had $200 so far and was trying to raise more funds. The plastic shed was over $600. Terrence said he would provide us the shed at no cost! Phyllis and I could not believe what had just happened. We walked out of that store on cloud nine. We made arrangements to pick up the shed on Tuesday, November 11: Veteran’s Day. We stopped by the Carpenter’s house to tell them what had happened. They did not know anything about the plan until this point. Donna began to cry as I told her we had gotten a shed and the men to build it.

Thanks to my boyfriend, Keith Norris, and my brother-in-law, Patrick Kelly, the shed was delivered to the Carpenters on Veteran’s Day morning. 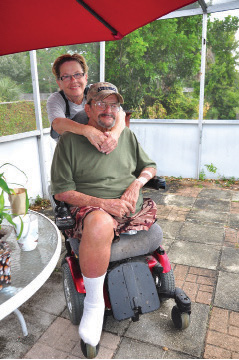 Fast forward to November 22, just a few days before Thanksgiving. The morning was overcast and threatening to rain. Shortly after 9am, Ben Goettler, a veteran who lives in the Old Northeast, arrived at the Carpenter’s address. He had gathered a few men to build the shed. These men – some veterans themselves and some just good souls – spend their free time helping their fellow vets in need. Ben tells me, “We just want them to feel a part of the community.” This team of Ben, Jeff Goldberg, Jerry Lavely, and Brian Weaver arrived with tools in hand and got right to work. Donna and I pitched in as Tom looked on. The guys worked well together, clearing debris from the yard and getting the shed up, all within three hours.

I feel so fortunate to have been a part of this project, sandwiched fittingly between Veteran’s Day and Thanksgiving. I am very grateful to all of our veterans and the sacrifices they have made on behalf of us and our freedom. It saddens me to see the hoops these men must jump through to get things that they need, so I was glad all of this came together, and the Carpenters now have a new, clean, and sturdy place to store their belongings… and got the dining room back in time for Thanksgiving!

Gina Longino, longtime resident of St. Petersburg, is a registered nurse and children’s book author of the Livvie and Buggles series (www.livvieandbuggles.com) She is a single mother to four children and grandmother to three. She enjoys spending time with family and friends, traveling throughout Europe and is currently working on a B.A. in Italian at the University of South Florida.
Share: