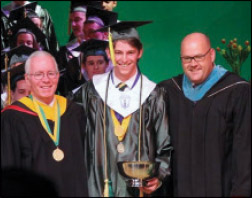 In May, one of our own Old NE Neighborhood residents, Jackson Willis, graduated from Shorecrest Preparatory School as the 2015 Class Valedictorian. In addition, he was also selected as a U.S. Presidential Scholar, one of only 144 students to be named as such in 2015. He was selected based on his academic success, essays, school evaluations, transcripts, community service, leadership, and demonstrated commitment to ethical and moral character.

Jackson Willis is the fifth generation to live in his home in Old Northeast St. Petersburg. His great-great-grandfather, Benjamin Latham Loyd Armstrong from Connecticut, built this home with a basement in the Old Northeast in the 1920s. Jackson has a long line of family members who have contributed to making our community a better place to live. His great-grandmother, Betty Willis, served on the board at All Children’s Hospital and promoted the first emergency room. One of his grandfathers, George Stovall, raised the funds for the first swimming pool at Northeast High School. Did you know the swimming pool at NE High was the very first swimming pool in Pinellas County? Bob Willis, Sr., Jackson’s grandfather, incorporated Shorecrest Preparatory School, which Jackson attended from kindergarten through 12th grade.

Jackson is an accomplished pianist and he has been playing the piano since he was 5 years old. Piano has been a talent shared by many generations on both sides of his family including aunts, uncles, parents, grandparents, and cousins. In his early days of learning to play, he recalls confusing the right versus left side of the keyboard. His current instructor, Ms. Julie Caprio, has been coming to his home to work with him for over 13 years now. He also recalls his first major performance playing for The American Heart Association at Ms. Katie Pinble’s house in the Old Northeast. Jackson truly enjoys playing the piano and he plans to continue to play throughout his lifetime.

Jackson speaks highly of his experience at Shorecrest, and appreciates the unique education and opportunities he achieved. He was often told “you never had to be the new kid,” as he is one of only a few kids who attended Shorecrest from elementary through high school. 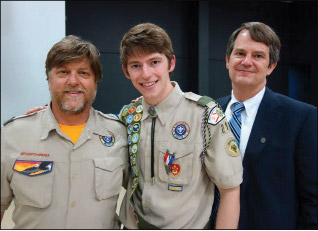 He participated in several school clubs and was involved in various extracurricular activities. Jackson participated in the History Club and also competed in the National History Day Fair. He was president of the Math Team and attended various competitions. He was the pianist in a Group Jazz Band which played in several showcases and talent shows. Jackson also has a passion for the arts and theatre and he participated in various performances in the Janet Root Theatre at Shorecrest. He is a founding member of the Shorecrest Honor Council. Jackson is most proud of be elected and serving three years as a representative and then president of the Honor Council. He found invaluable the experience of being on the council and reviewing potential Shorecrest Honor Code violations of his peers along with recommendation of disciplinary actions.

Jackson participated in the Shorecrest Global Scholars Initiative led by Mr. Richard Beaton. He has great respect for Mr. Beaton, who is fluent in multiple languages and was also his instructor for AP Economics and European History. As part of this effort, it was his responsibility to research and find speakers with regard to global issues.

He also had many opportunities to speak to various groups such as non-profit organizations, professors, and legislators. In addition, he attended several outside events and monthly meetings which focused on global issues such as the Tampa Bay Council in Foreign Relations. As a result of this wonderful opportunity, he had the privilege to personally meet the ambassador of Mali. Jackson presented his final project, “Salvador Dali’s Visual Timeline,” the capstone of his Global Scholars Initiative. It is a digital document of Dali images from his life, with world history from 1904 until 1989. Jackson’s project has been considered and may be on display in the lobby of Dali Museum in St. Petersburg at a future date.

Several students struggled trying to determine the subject matter for their final project although this was an easy decision for Jackson as he had two summer internships at our local Dali Museum under the direction of the executive director. In the summer of 2014, Jackson had the opportunity to visit the Dali Exhibit in Rio de Janeiro. This was the largest Dali retrospective exhibit in South America. He also traveled to Barcelona, Spain, and attended the opening of the Dali Exhibit at the Picasso Museum.

Another of the most memorable moments of his internship was visiting Dali’s house in Portlligat, Spain. Jackson described Dali’s house as very unusual and eccentric, made up of several fishing cabins with various levels of elevation with many steps to get from one room to another. He also described the unique decorations, from animal taxidermy displays to his art studio with large rollers of canvas from the floor to the ceiling which enabled Dali to paint his large masterpieces.

Jackson is an Eagle Scout for Troop 219, hosted by St. Raphael’s. As his Eagle Scout project, Jackson helped host an International Sea Turtle Commission Treaty which binds multiple American countries such as the United States, South America, and Central America. This Sea Turtle Project/Treaty has been built into an informational kiosk on display at Fort De Soto Park near the main concession stand. We encourage you to visit Jackson’s display and learn why we need to protect our sea turtles and help save our environment.

June of 2015 was an exciting month for both Jackson and his younger brother, Walker. Walker Willis, who also attends Shorecrest, is in 8th grade and recently won second place in the Florida State History Fair. He went to Washington D. C. to compete in the National History Fair the same week Jackson went to D.C. to collect his Presidential Scholar Medal. Walker is also an Eagle Scout and he recently finished his Eagle Scout Project, creating an outdoor classroom for science classes at Shorecrest. Jackson has been an inspiration for Walker who is following in his footsteps both academically and socially.

So, what is next for Jackson? He will attend Yale University in the fall. As a high school senior, Jackson has already left a significant mark in our local community. He has a passion for service to our community and feels our area offers incredible opportunities for involvement and contributions. We wish Jackson the best of success in his educational endeavors, and we look forward to his return to our community and his additional contributions.