Jeanne Houlton and the Japanese Art of Flower Arranging 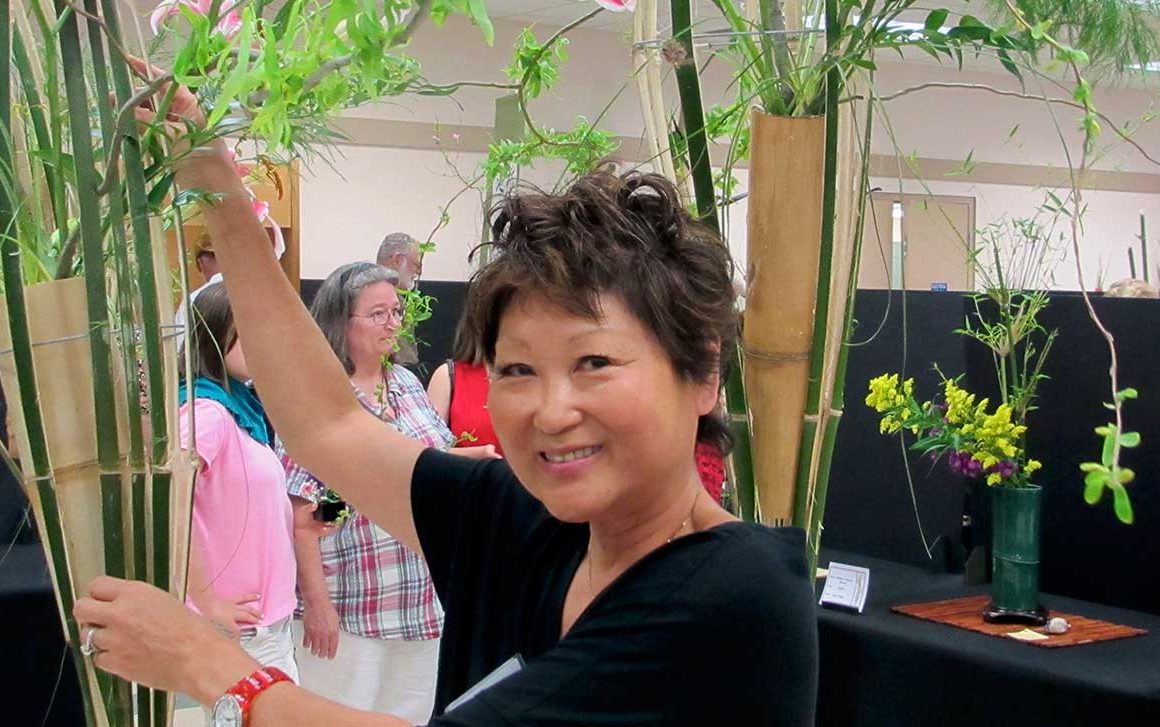 As a master in the Ichiyo School of Ikebana, the Japanese art of flower arranging, Jeanne Houlton’s arrangements are a study in minimalism, balance, graceful lines, space, and proportion. More than a simple decoration, Ikebana arrangements are three-dimensional floral sculptures.

“In Ikebana, the idea is less is more,” says Jeanne. “By taking away, a more powerful effect is achieved. Negative space is part of the art. It’s also transient, which is represented in our use of all stages of the plant, from seed to flower to the dried form in death.” Jeanne also points out that western floral design is symmetrical, but Ikebana uses asymmetrical balance. “The movement looks up, toward the sun,” she says.

Ikebana traces its history back to sixth-century Japan when floral offerings were placed on the altar of temples. “When my mother was growing up, after English school, they would learn the Japanese art of flower arranging at Japanese language school,” says Jeanne. “In Japan, starting with the Mejia era, flower arrangement and tea ceremony were taught to all women to become good housewives.”

Ikebana International, a nonprofit cultural organization, was established in 1956 and today has chapters worldwide, including six in Florida. Jeanne is a past president of the Ikebana International St. Petersburg chapter and current program chair. Within Ikebana, there are hundreds of different schools, each with its own ideas of how to create the arrangements. Jeanne is a master in the Ichiyo School, which encourages a modern, personal interpretation and freeform abstract design using both natural and non-natural materials. In 2010, Jeanne had the honor of representing the Ichiyo School and North America as one of the demonstrators at the 10th Ikebana International World Convention in Tokyo. She is currently the president of the Ichiyo Florida chapter.

A fourth-generation American of Japanese ancestry, Jeanne was born and raised in Hawaii. After graduating from the University of Hawaii, she worked for a year as a flight attendant and then moved into fashion merchandising – first as a buyer for junior dresses and sportswear, and later as a buyer and merchandise manager for the largest international fashion retailer in the world. Her specialty was high-end leather designer handbags. “I traveled 70 percent of the time, procuring product in the U.S. and Europe and selling it to customers in the Pacific Rim,” says Jeanne. Her husband, Jerry, worked for the same firm designing the company’s computer software systems.

In 1987, they retired and relocated from San Francisco to Florida, eventually building a home that was designed to accommodate their love of art. Jeanne creates Ikebana, while Jerry creates large hanging mobiles in the style of famous designer Alexander Calder. He’s also passionate about modern art, which hangs on the wall of their living room. Jeanne has dozens of ancient baskets on display from the Philippines.

Retirement gave Jeanne the freedom to begin full-time study of Ikebana. She had first started lessons when she was 23 and still in Hawaii, but the demands of her career grew too much. In retirement, she was able to pick it up again. She is now a teacher or sensei in the Ichiyo School and has been studying with the headmaster (iemoto) of the Ichiyo School in Japan – first Akihiro Kasuya, and now his son Naohiro. For more than two decades, she traveled to wherever the headmaster was demonstrating in order to assist with backstage preparations. She received the flower name Keiyo in the Ichiyo School, one of few people outside of Japan to have this distinction.

In 2000, she began taking students herself. Most live in the Tampa Bay area and have been studying with her for many years. All are very serious in their commitment. At the same time, she has continued to study personally with the headmaster in Japan. “You are a student forever,” says Jeanne. “Ikebana as an art form requires lifetime study.”

On a Saturday in October, I spent several hours at her studio learning the basics of Ichiyo School arrangement. Jeanne demonstrated and I attempted to follow. That’s part of the process, she says. “The first 40 lessons, the instructor tells you where to put everything. You make it over and over again. Then something clicks. Everyone can do it, you just have to be patient,” says Jeanne.

Practice and repetition might be critical, but I thought there still had to be more. “It’s like knowing how to match the right blouse with the right pants,” says Jeanne. “I had a head start. I developed an eye for it with my background in fashion merchandising.” In fact, says Jeanne, the Ichiyo School of Ikebana is sort of like fashion in that the style of arrangement continually changes with the times.

Design principles come into play, too. Jeanne pointed out that every Ikebana arrangement begins with the placement of materials in a triangle, which according to ancient tradition is meant to represent a harmonious relationship between heaven, earth, and humanity. “It’s an idea that comes from the ancient Japanese religion of Shinto that teaches there is a spirit in everything,” says Jeanne. “It also adds a little excitement. There are four legs on a table, but a triangle looks like it might tip at any moment.”

Most of the plant material is found in her landscape, but Jeanne orders the flowers wholesale. Against one wall in her studio is a large glass-front cooler with a fluorescent light where she keeps her flowers. “Each flower is different in the care it needs, just like people are different,” says Jeanne. When the flowers arrive, she cuts the stems under water and gives them food and light. Cutting plants underwater creates a vacuum to allow the water to rise up the stem, she says, which helps the arrangement last longer. Both flowers and plant material are conditioned with a special preserving material before use; so is the water.

Jeanne also has entire closets filled with containers and vases. Containers are an important part of the arrangement. “Collecting and hunting for the right one is part of the fun,” says Jeanne.

Does she have a favorite arrangement that she’s made? “I don’t have one,” says Jeanne. “Many times I like the arrangement better years later when I look back at the photographs.”

Over the years, Jeanne’s work has been on display at many events and organizations around the world, including locally at the Florida Orchestra Holiday Home Tours, the Morean Art Center, Florida CraftArt, Sunken Gardens and much more. She‘s participated in the prestigious Art in Bloom at the Museum of Fine Arts for the past 20 years, and as a member of the MFA’s Stuart Society, she’s served as Art in Bloom installation chair twice. The St. Petersburg Ikebana chapter is currently exhibiting at the entrance to the Imagine Museum and Jeanne’s work will be shown there at the end of December.