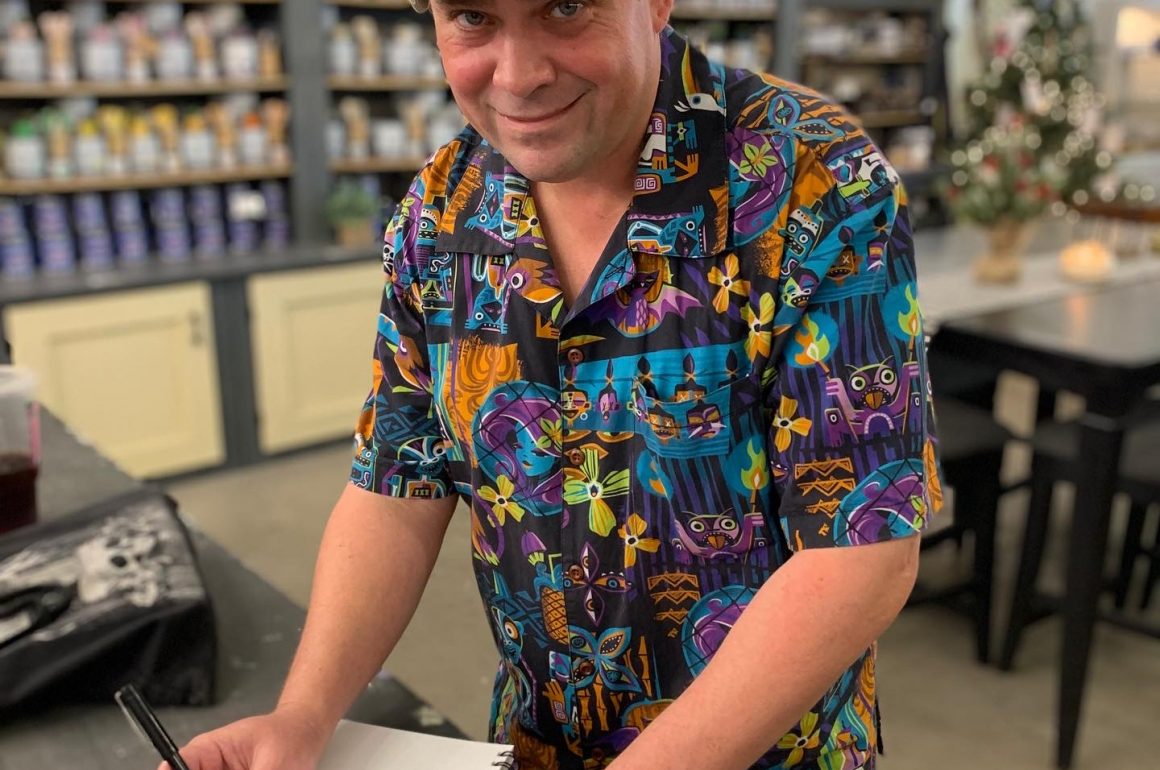 Joshua Ginsberg is a man of mystery. The author of Secret Tampa Bay: A Guide to the Weird, Wonderful and Obscure (2020), Tampa Bay Scavenger (2021), and Oldest Tampa Bay (2022), his work delves deep in the strange or lesser-known bits of the Bay area.

Ginsberg’s writing career was catalyzed by the sudden death of a friend while he was still a resident of Chicago. “Seven years ago, I was stunned when my closest childhood friend, Steven, died,” he explains. “I had been talking with him late one night, making plans to see him and his family, and I got a call the next day that he had died. I was really shaken by this – it sort of shocked me out of the trancelike state I’d been going through life in and made me realize how uncertain things are, and that if I wasn’t where I wanted to be and doing what I wanted to be doing, it was time to make a change.”

Ginsberg and his wife, Jen, knew they didn’t want to stay in Chicago, so they began looking for other places to call home and start living the life they wanted.

“We fell in love with the Tampa Bay Area,” he says. “As we prepared to move, I decided that I wanted to spend my last months in Chicago trying to learn the city in a way I never had before – really exploring everything I could and coming up with a list of things you can only do or experience in that one place.” Some of his research was published in The City Key, Atlas Obscura, Travel After Five, and on his own blog, Terra Incognita Americanus.

The experience of taking a deeper dive into the stories of his city would become valuable later, once he, Jen, and their Shih Tzu, Tinker Bell, moved to the area in 2016. Ginsberg’s inspiration solidified when a trip tovisit family in Philadelphia led to his discovery of a series of novels containing information in a very similar vein.

“I picked up a copy of Secret Philadelphia: A Guide to the Weird, Wonderful and Obscure by Reedy Press. When I returned home, I got to thinking that maybe I could write something like that,” he says. “I reached out to the publisher after seeing that they didn’t have one of their ‘Secret’ books for the Tampa Bay area, and to my surprise they were interested. Within a couple weeks I was looking at my first publishing contract.”

Secret Tampa Bay was published in 2020 and Ginsberg’s excitement built over what he had created. “Of course, releasing a local travel guide to many of the area’s lesser-known wonders and curiosities just months before a global pandemic probably wasn’t the best timing,” he says. “I felt that I needed to be more creative for the next one.”

Ginsberg combined knowledge gained from his first book with his experience in an international event called the “Greatest International Scavenger Hunt,” or GISH, for short. A yearly happening created by Supernatural actor Misha Collins in 2011, it contains a zany list of scavenger items, creative events, and interactive ideas. GISH is also used as a fundraising event that aids worldwide charities and works to raise global awareness of places and people in need.

“Tampa Bay Scavenger is my second book with Reedy Press and my first time creating what I guess could best be called an activity book. It sort of happened accidentally – I created a small scavenger hunt, just a couple dozen rhyming riddles that would lead people to some of the places in Secret Tampa Bay.”

According to Ginsberg, that small scavenger hunt never got off the ground, but his publisher saw the riddles and asked if he could turn them into a book.

“It turns out that they were looking to create a new series of scavenger hunt books, so we were clearly thinking along the same lines,” says Ginsberg. “The end result is a book of 361 rhyming riddles that lead people through Pinellas, Hillsborough, Manatee and Sarasota counties.”

There is also a web portion that participants can use to unlock four puzzle pieces, which, when combined, create a final puzzle. Everyone who completes that will receive something special at the end of their quest. The first player, ZooTech, just completed that achievement in April. And, in homage to the GISH inspiration, Ginsberg continues to donate a portion of each book sold to the organization Random Acts of Kindness, the charitable entity connected to GISH.

When it comes to our corner of St. Petersburg, Ginsberg gives a nod to Sunken Gardens and also explores the Historic Old Northeast and Historic Uptown neighborhoods for some of their secret gems.

“I don’t want to give away what they are, but some are places and landmarks that locals will probably be familiar with, and some are much lesser known,” he says. Along with the history of Sunken Gardens, a popular roadside attraction for over 100 years, Ginsberg also sneaks in a bit of information on the locally famous Coffee Pot Rhino. The riddle for the statue reads: Your typical roadside creature this horned beast is not, find it wearing seasonal garb alongside of Coffee Pot.

“I love that sort of thing,” says Ginsberg, “because it’s one of those quirky little things that people know about at the neighborhood level, but it’s not something that you would find in a typical tour book. It’s part of our local color.”

Apart from local quirks and lore, there is another reason why Ginsberg finds his work so gratifying.

“On a personal level, it has allowed me to continue to push my capabilities – game design was an entirely new and unexpected direction for me,” he says. “And I’m not done yet.”

While his latest book comes out this fall, Ginsberg has also been tapped to write the script for a haunted Clearwater ghost tour. “For me,” he adds, “the goal is to give readers a new way of looking at, exploring, and experiencing the area, whether they’re just visiting for a few days or if they’ve lived here their entire lives.”

Find Ginsberg’s work at Tombolo Books and the Saint Petersburg Museum of History. Get in on a scavenger hunt at tampabayscavenger.com.