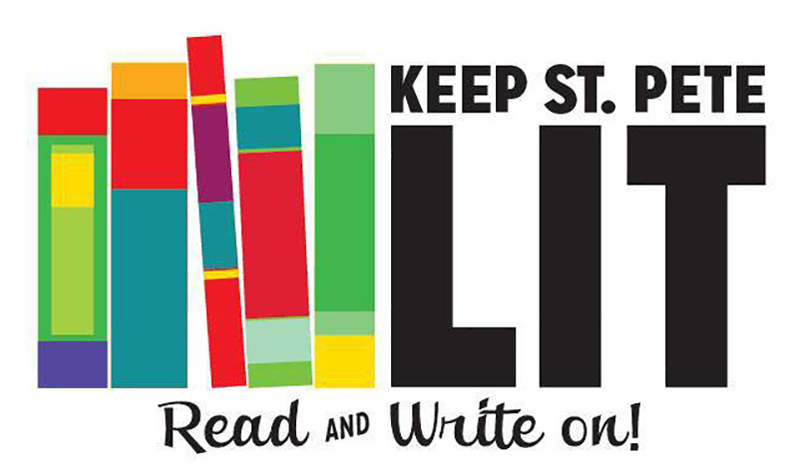 While the City of St. Petersburg was developing its reputation over the past two decades as a premiere arts destination in the southeast, a budding native-daughter poet was set on filling the literary cultural void. What began as an effort to design and promote reading and writing events blossomed less than a year later into a nonprofit supporting the literary arts through ongoing education and creative events. Keep St. Pete Lit celebrated its seventh anniversary this past August.

Maureen McDole, Keep St. Pete Lit’s founder and executive director, spearheaded the organization’s growth from its inception to the present where it is now regarded as one of Florida’s leading literary arts groups providing low-cost, high-quality writing classes to people of all ages – from elementary school on up to seniors – and all skill levels from beginners to professionals. Presentations, readings, and programs are also on the menu. There is something for everyone. All of the writing instructors have an MFA or doctorate.

A graduate of USF St. Petersburg with a Bachelor of Arts in English Literature, Maureen also has a certificate in Arts & Culture Strategy from the University of Pennsylvania. In 2016, she received the St. Petersburg Art Alliance’s MUSE Award for literary excellence. She is a single parent with a 14-year old daughter. Book & Bottle – a new bookstore, coffee and wine bar in downtown St. Pete – features Maureen’s poetry, including Exploring My Options, published in 2006, and Longing for the Deep End, published in 2011. Her third book of poetry, Feast, is being published by St. Pete Press, and is due out around New Year’s 2021.

Since 2015, St. Pete Lit’s classes have been held at the Morean Arts Center, but in-person events have been cancelled since March due to COVID-19. Fortunately, the organization is “nimble,” said Maureen. Since the group currently doesn’t have a brick-and-mortar building with a mortgage or rent that would come due, and there are multiple revenue streams, it wasn’t necessary to furlough anyone on the staff. “It’s been a blessing,” said Maureen.

But, she was forced to consider alternatives. “This definitely is a time to be open to thinking outside the box,” she said. For now, instead of Saturday writing classes at the LitSpace Literary Arts Institute at the Morean, participants can join in virtually through either Live Zoom Classes or Instant Video Classes.

In addition, Writer’s Gym meets virtually on the second Saturday of the month and Poet’s Gym meets on the first Saturday of the month. Both are online meetups where writers can participate in workshops via Zoom. On-demand online classes are available 24/7 and give instant access to instruction in six categories: creative non-fiction, general creativity, fiction, poetry, self-publishing, and children’s classes. Currently there are over 30 original video classes with more available as instructors finish creating them expressly for this project. Recently, Maureen added manuscript critique classes as well as four new videos to the collection, including Strategies for Poets in the Digital Age (instructor Gianmarc Manzione), The Time Machine (instructor Kevin Richard Kaiser), How to Become a Web Content Writer (instructor James McAdams), and Setting the Table for Your Story (instructor Jeannie Carlson).

This is also the third year the City of St. Petersburg has supported Keep St. Pete Lit with grants, making it possible for the nonprofit to offer writing classes for residents of all ages as well as after-school writing programs to children in lower-income communities. In one of these programs, children in third through fifth grade have an opportunity to meet and write once a week during the school year, concluding with the publishing of their collective work in an anthology. “We have diverse programming all the way around,” said Maureen.

The latest brainchild for the organization is Typewriter Talks, a weekly online series where Maureen interviews local writers, both beginners and experienced, and showcases their literary works. After more than 20 episodes so far, it has become so successful that she is considering increasing the program from once a week to twice a week.

In addition to Maureen’s role as executive director, there are 10 board members, three of whom reside in Northeast St. Pete – Tracy Kennard, who lives in Crescent Lake; Maria Mora in Snell Isle; and Jon Kile in the Old Northeast.

Jon is a long-standing member of the board, having served since the early days of 2014. He is currently “a stay-at-home dad, writer, and amateur homeschool teacher.” He has published one novel, The Grandfather Clock, and contributes to local media outlets including Creative Loafing, St. Pete Catalyst, Northeast Journal, St. Pete Life Magazine and The Gabber. Jon says he has found it exciting to see Keep St. Pete Lit evolve into the organization it is today. “Maureen’s passion and leadership have elevated the literary arts in a city rich with culture,” he said.

Tracy Kennard was voted Creative Loafing Tampa Bay’s Best Local Personality to Follow on Twitter in 2012 and 2013. She is a social media guru and operations mastermind at her firm Your Virtual Footprint, which she founded in 2010. Tracy is well-known in the local arts community, having worked with St. Pete Arts Alliance’s Second Saturday ArtWalk, Keep St. Pete Local, Preserve the ’Burg, Duncan McClellan Gallery, First Night St. Pete, the Warehouse Arts District, Florida CraftArt, the Palladium Theatre, and Creative Pinellas.

Maria Ingrande Mora graduated from the University of Florida with a bachelor’s degree in English, concentrating in creative writing. The vice president of Creative and Content Strategy at Big Sea, Maria has “over 18 years of experience building brand narratives, editorial strategies, and digital campaigns for clients across multiple industries.” She is a single mom of two children and has a “small menagerie of rescue animals.” Her debut young-adult novel, Fragile Remedy, is due out in March 2021. After being on the board for a year, Maria looks forward to continuing to serve. “I was drawn to Maureen’s commitment to representation in children’s literature, and I look forward to continuing as a steward of helping kids get access to books by authors who share their marginalization.”

On the horizon, St. Pete Lit is partnering with Florida Craft Art for classroom space, and is in talks with the Dali Museum about creating programming at the museum. In other exciting news, the organization has decided to take the next step and move into a small “incubator space” that has been granted to them at The Factory, a new 95,000-square-foot, multi-purpose arts-related venture in the Warehouse Arts District.