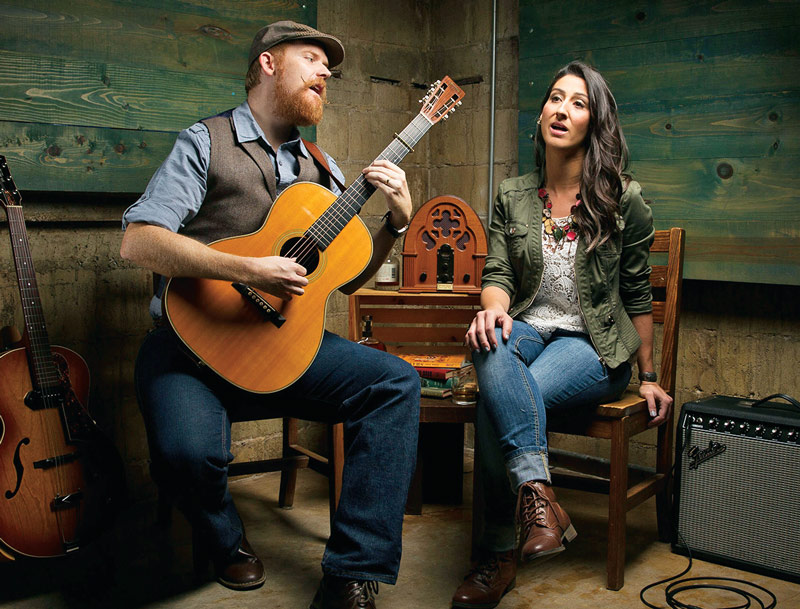 Michelle began singing in her church choir at the age of nine. Under the leadership of the church’s dynamic organist, Michelle was assigned as understudy to the soloist in Handel’s Let the Bright Seraphim. Though she never imagined performing that solo on stage, a chain of events landed her in the starring role. Michelle remembers being sick the night of the concert. On stage, her voice cracked and faltered, then grew stronger. “It was an amazing feeling to feel the power in my voice,” she says, and admits, “I was hooked on the joy of performing live.”

Michelle joined the Florida Girls’ Choir and was named Soloist of the Year. Then, during high school, she became an active member of the Clearwater Community Choir. Following graduation, and still not sure of her direction, a friend encouraged her to apply for the music program at Florida State University. There, Michelle concentrated on voice, touring with The University Singers. She also met Jimmy Moore, a doctoral student, and the rest is history. Following graduation, Jimmy and Michelle moved back to the Tampa Bay area where Michelle performed with Opera Tampa and the St. Petersburg Opera. Today, Michelle works a full-time job from home while managing many of the business details involved with the couple’s continuing musical pursuits.

Growing up, Jimmy’s older sister loved her record collection. She had joined the Columbia House Record Club and was eagerly expecting a shipment of 12 vinyl LPs, which she had purchased for a grand total of 1 cent. At the age of 9, Jimmy arrived home from school first. “My one job was to take the box of LPs, without opening them, into the house and to put them in her bedroom,” he says.

Jimmy was so impacted by this experience that he later wrote about it. He shared what he wrote in an email: “Having little self-control at that age, I opened the box. Inside were recent releases by Bon Jovi, Duran Duran, U2, Culture Club, Journey, REO Speedwagon, and Tears for Fears. Then I saw the Tribute album.” (The Tribute album, produced in 1987 by Ozzy Osbourne, featured his work with heavy metal guitarist Randy Rhoads. Rhoads had originally played in the group Quiet Riot before joining Osbourne. Tragically, he died in a plane accident in 1982.)

“I reached in for this record, and after holding it up to study the cover photo, I tore off the wrapper and curiously opened its book-like cover. Inside were large, colorful pictures of Randy Rhoads on stage playing his polka-dot Flying V and cream-white Les Paul guitars. I went on to read the handwritten letter from Ozzy on the back cover and found out how young Randy was and how sorely missed he was by many.”

Was Jimmy’s sister upset? “No,” smiles Jimmy. “She has always been a great, supportive older sister. I think she was secretly happy that I liked her music.” As a result, Jimmy played heavy-metal guitar in bands all the way through high school.

Jimmy’s second ‘aha moment’ came at the age of 18 when he was mesmerized by classical guitarist Paco De Lucia, who was performing at the Mahaffey Theater. Then and there, Jimmy knew it was time to leave the heavy metal bands and transition to classical guitar. He wasted no time, eventually earning a Doctor of Music degree in Classical Guitar from Florida State University’s highly respected guitar program.

Lady and the Bard 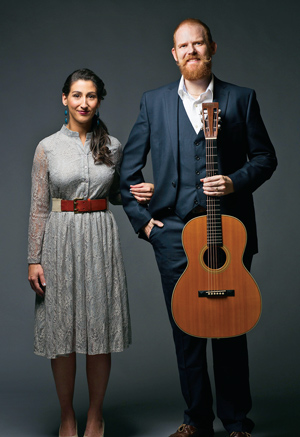 Together, Jimmy and Michelle are a dynamic couple, artfully balancing busy married life with their musical dreams and aspirations. Through their duo Lady and the Bard, they have found a special niche built around their shared interest in Americana from the Civil War to the 1940s. It’s easy to see why Jimmy and Michelle refer to this work as their ‘passion project.’ The folk heroes they discover continue to fuel their inspiration to write original music, blog, record their first album, and fine-tune their tight vocal harmonies. As a result, their class-act musical performances are infused with lively and interactive storytelling. “We love the intimate concert setting,” they both told me.

The couple’s mutual taste in favorite artists includes Woody Guthrie and Jean Ritchie, and they relish the task of digging for the roots of a favorite song. One of their favorites is a ballad called The Unfortunate Rake originating from a day when folksongs doubled as public service announcements. Often, these cautionary tales were sung as a warning to others. The Unfortunate Rake is the tale of a young soldier who lies in the hospital dying of a disease from a “woman who disordered me.” It is believed that this song spread through barracks and ports, showing up in Kentucky, Wyoming, and Texas before eventually being spun into a similar American folksong called The Streets of Laredo.

In case you haven’t attended one of Lady and the Bard’s performances, you can hear a sampling of their music at www.ladyandthebard.com Here on their blog, Michelle offers a wealth of information including video clips, playlists, and suggested websites. A recent post dedicated to Woody Guthrie provides background on his song Pastures of Plenty, and explores the plight of Dust Bowl workers during the Great Depression. There is so much interesting information on this site, in fact, that I could have spent an afternoon just reading and learning. Instead, I spent an afternoon on the porch, listening to stories from some of the finest neighbors around. I hope you have a chance to meet them soon.