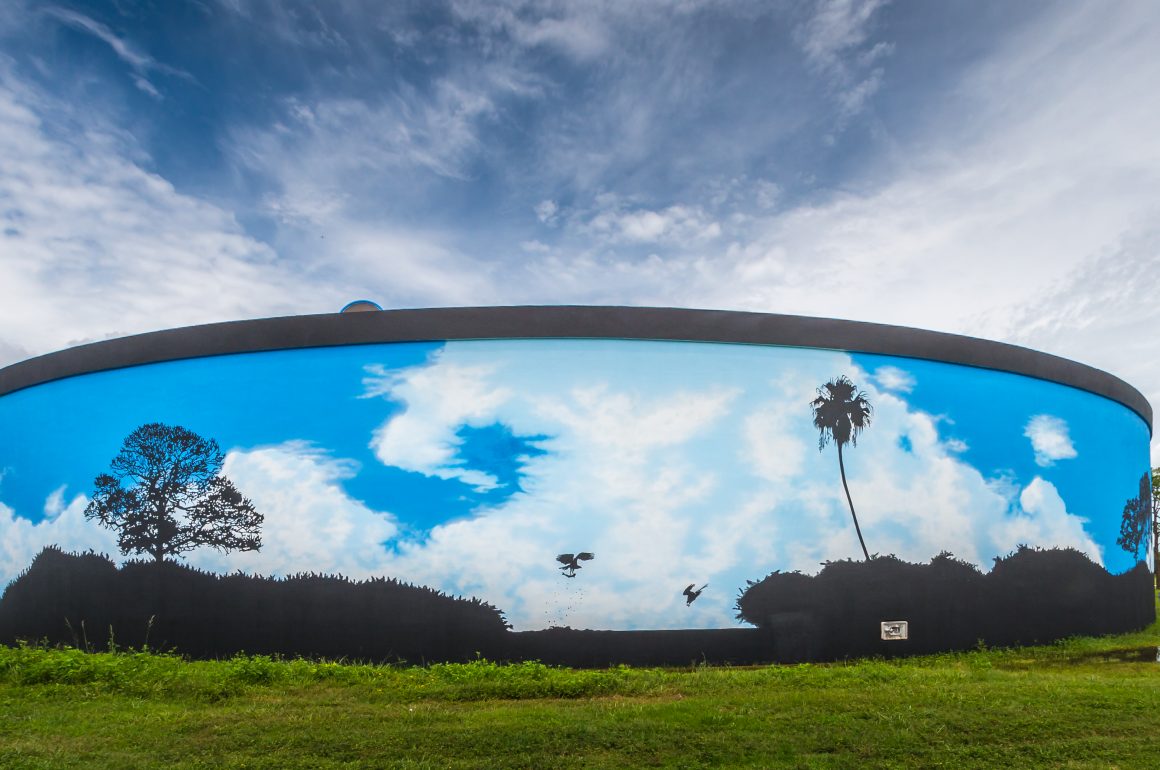 Drive over St. Pete’s downtown district atop I-275 N, and you’ll look down on a city painted with murals, street art, and zany signage, all caressing the Sunshine City in a trendy blanket of art. But what about the neighborhoods surrounding downtown?

The Historic Old Northeast and nearby neighborhoods are becoming more colorful every day, as murals pop up on walls and in unexpected places, such as the Northeast Water Reclamation Facility.

Zipping by this new public art, it’s easy to forget the intricate – and sometimes goliath – works were created by people, oftentimes local. In a sea of talented artists, here’s a few whose creations you may recognize.

St. Pete muralist Tom Stovall is responsible for some of the largest public art works in Pinellas. But he never really got in on the downtown mural explosion, mainly because he doesn’t want to paint “flat walls.” The two mangrove and sky-wrapped water reclamation tanks at the Northeast Water Reclamation Facility are his handiwork.

He completed the work essentially alone and finished his wildlife-themed pieces in 2018, after several months of circling the domes. One tank holds seven million gallons, the other, 10 million. While it was a challenge, to say the least, Stovall had some experience – he painted the Crescent Lake water tower in the ‘90s. And he’s not done yet. He’s currently painting the Dunedin Curlew water tower.

Some might say St. Pete-based artist Cecilia Lueza is in her blue period. Her “Music & Me” piece, a towering blue vision painting the Music and Me childhood education center took two weeks to complete. The sweeping lines and childlike whimsy enveloping this piece were intentional, the artist says.

“My style is the result of my lifelong fascination with the visual effects of color and the natural world. Most of my murals are designed to activate the walls with swooping color blends or undulant shapes that evoke brightness and positive energy,” said Lueza.

Music and Me is a place for children, but anyone can drive by and admire the bright blue creation at 1507 4th St. N.

“Each mural conveys a different feeling, depending on the circumstances under which they were created. It’s always good feelings,” Lueza said. “This mural, in particular, warms my heart because it is inspired by children, music, and innocence.”

A head-turner for sure, the vintage pocket watch endlessly floating on the Hess Fine Art and Old Northeast Jewelers building is a local staple. Unbeknownst to many, the giant timepiece was one of the first few murals that artist Aaron Tullo created.

Its old-fashioned renderings and ingrained details are akin to the types of watches that Old Northeast Jewelers specializes in.

“It’s one of my favorite murals that I’ve done,” said St. Pete artist Derek Donnelly. “It never got a lot of attention for some reason.” Hard to say why, considering Donnelly’s “Angels and Demons” piece (coloring the wall of Cut-Ups Hair & Nail Salon at 2601 9th St. N., St. Pete) is surreal with a historical background.

In 2017, the Crescent Heights Neighborhood Association commissioned Donnelly, known as Saint Paint, to create a mural, but gave him complete control over the concept. After two weeks of painting, St. Pete’s Peter Demens was resurrected.

Demens, the man Demens Landing Park is named after, is a founding father of St. Petersburg. Once upon a time (the 1880s), Demens was a Russian exile who opened up this piece of Florida with his Orange Belt Railway. He now lives on in Donnelly’s street art, and the local artist merged Demen’s face with an Indigenous woman.

“Normally, I do eye candy, but this one is a little conceptual; there’s a deeper meaning behind it,” Donnelly said. “This one is probably more ‘me’ than the pieces that people know me by.

The native St. Pete artist is known for many of the city’s works, including the Sirata Beach Resort mural, the purple octopus “Champa Bay Odyssey” mural at Countryside Mall. He also made history by painting a mural, licensed as an NFT, in the first-ever US home to be sold as an NFT in Gulfport.

As for the now six-year-old “Angels and Demens” piece, it’s still one of Donnelly’s favorites. “A lot of people don’t know the history of St. Pete,” Donnelly said. “I think it’s important. I’ve never lived anywhere else; I’ve been a ‘727’ area code [even] back when it was all ‘813.’”

In a sea of transplants and a mural renaissance, it may be comforting to know some staples are here to stay.

« Previous post
Family Ties: Studio Grand Central Brings It Home
Next post »
Inside and Underneath the Historic Home of Rachel and David Wein