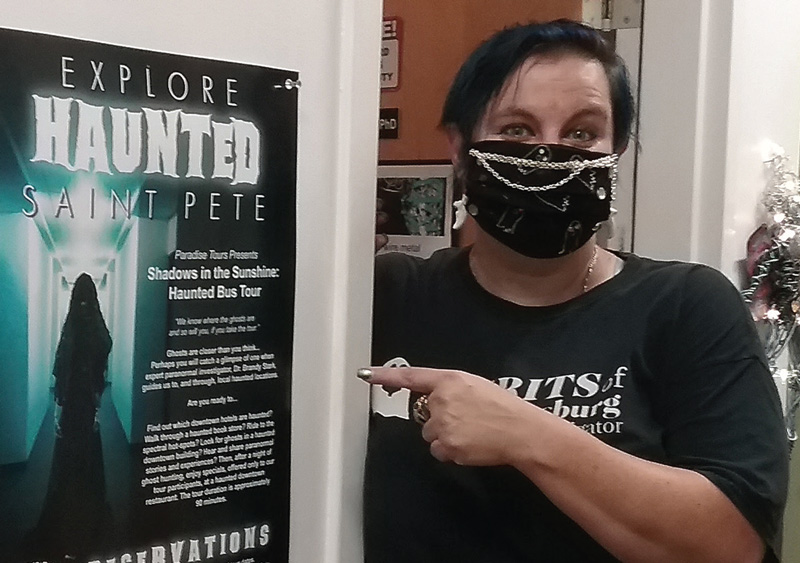 I once met the esteemed author, Jack Kerouac, at Haslam’s Bookstore. It was an exciting experience for me, especially since he had been dead for several decades. This meeting took place during a ghost hunt performed by the SPIRITS of St. Petersburg. I was there as a paranormal investigator and he was a mysterious mist that manifested on film. This was my first photographic evidence of the spirit world, setting the stage for what has now become a 23-year career as a paranormalist.

After reading about my interest in the paranormal, many people might shake their head in wonder. But SPIRITS of St. Petersburg – a group I co-founded in 1997 – has investigated well over 200 cases of supernatural activity in the Tampa Bay area. Not all of them turned up evidence, but many have.

SPIRITS is an acronym for “Serving Paranormal Investigation Reporting Information Through Study.” While there are a few people on our paranormal investigation team who are ‘sensitives’ – which means they have the ability to perceive psychic phenomenon – all of our investigations are evidence-based. I rely on the latest scientific equipment to study and measure potential supernatural activity. We also conduct history research of the property to help us in our investigations.

Since childhood, I have been fascinated with the supernatural and enjoyed books on ghosts, ESP, and paranormal events. That interest continued throughout my life and as an undergraduate at the University of South Florida, my first research paper was on the changing role of ghosts in ancient religions and cultures. I went on to complete a double degree in History and Classics, followed by three graduate degrees and a doctorate. For many years I was a professor of Humanities and Religious Studies at several local state colleges. Currently, I am an instructor in the Eckerd College Osher Lifelong Learning Institute, where I will be teaching two online classes this fall: Supernatural History and Ghost Hunting 101.

To prepare for my journey investigating the paranormal, I pursued additional study and training, including being mentored by seasoned ghost hunters. It was through them that I learned about electromagnetic fields (EMF) and how these changed when ghosts were present. I bought my first electromagnetic low frequency (ELF) meter and started to do a few small paranormal investigations. I stayed local, delving into Tampa Bay urban legends such as the haunted elevator in a building at the University of South Florida St. Petersburg campus, the Vanishing Hitchhiker of the Sunshine Skyway Bridge and the haunting of the historic Williams house.

A few years later, after a talk I gave at a Gulfport Art Gallery, a couple came up to talk with me. They were retired engineers and had started a home inspection business. Many of the tools they used in their business were the same that were used for ghost hunting at the time. They also had a keen interest in non-worldly things. We combined their equipment with my knowledge and thus the SPIRITS of St. Petersburg was born. I never thought our team would last another two decades, or that interest in our investigations would grow.

As you can imagine, over the years I’ve had many unusual experiences. I have been scratched by an unseen hand, seen a Bible float off of a bookcase, watched lights turn on and off by themselves, experienced unexplained complete equipment failure in a single instant, and walked through mysterious columns of cold air in closed buildings.

I like to believe that I have posthumously met the mysterious ghost at the Vinoy when I stayed overnight in their haunted room, heard the voice of St. Petersburg founder John Williams during a television interview at the Williams House, and perhaps even run into a few of the former workers at the Don Vista building in St. Pete Beach. I even smelled the cologne of Fink Foster at the Tampa Theater – after he put his hand on my shoulder.

Our group also hosted an episode produced by the City of St. Petersburg television channel on hauntings at Haslam’s Bookstore, where I had my Jack Kerouac experience. We were not the first group to ‘meet’ Mr. Kerouac at the store – employees had a long history of encounters with him. I learned years later that the area where the mist was captured was where one employee had an encounter. He was replacing books on the same shelves where the mist manifested. It was after-hours and the store was locked. The clerk heard someone say behind him, “How are you doing?” Surprised, he turned around and discovered that he was quite alone!

I have worked to maintain three core values for the SPIRITS of St. Petersburg team: integrity, respect, and compassion when dealing with the living and the spirit world. The group provides a free service to the community. We are here to help and serve as a mediator between the two worlds. Our goal is to create an understanding and reduce fear.

A typical case involves someone contacting us through our website or Facebook page. As the primary contact, I follow up with questions and a form for the home or business owner to fill out. We have an off-site researcher who looks into the history of the property, which I also collect. Volunteer investigators are contacted. Initially, they receive only the nearest major crossroad in order to gauge driving distance. Two hours before the investigation, the address is sent out. The other investigators arrive with no other information.

During the investigation, I sit with the home owner. The investigators walk through the house, measuring for EMF, temperature, and any unusual sensations. They return to talk about the areas where they sensed or found something unusual. We triage the areas of highest activity and follow up with photographs, video recordings, EVP (electronic voice sessions), and actively try to contact the spirit.

At the end of the night, I reveal the information that the home owner gave me and the research on the house. Then the group discusses the event with the home owner. Finally, the various investigators do a secondary review of the recordings and photographs. We create a summary of the case and present the evidence – or note the lack thereof – by posting the information, with owner approval, to the SPIRITS of St. Petersburg website.

If you’re interested in learning more, SPIRITS of St. Petersburg is meeting monthly on Zoom. We also will be participating in the World’s Largest Ghost Hunt on September 26 –the official National Day of Ghost Hunting. We’re meeting at Mirror Lake Park at 7pm to explore this historic area where, according to urban legend, a ghostly woman appears. A second event, closed to all except for a small group of SPIRITS members, is slated for later that evening at a private location in downtown St. Pete. Both sessions will be presented live-stream, tune into our SPIRITS of St. Petersburg Facebook to watch.

We invite you to browse at our Little Free Library of Supernatural Stuff, which offers a variety of supernatural literature. The little library can be found outside the entrance to the ArtLofts studios on 5th Street North, around the corner from the Florida CraftArt Gallery. In addition to my interest in the paranormal, I am an artist with a studio at ArtLofts. The artists at ArtLofts joined me in transforming a retired Tampa Bay Times newsstand into a terrific miniature mural of spectral images, perfect for our books on the paranormal.

For more information on SPIRITS of St. Petersburg, go to www.spiritsofstpete.com. I host a Paranormal Pets podcast on petliferadio.com and am always looking for guests and personal stories to add to the show.