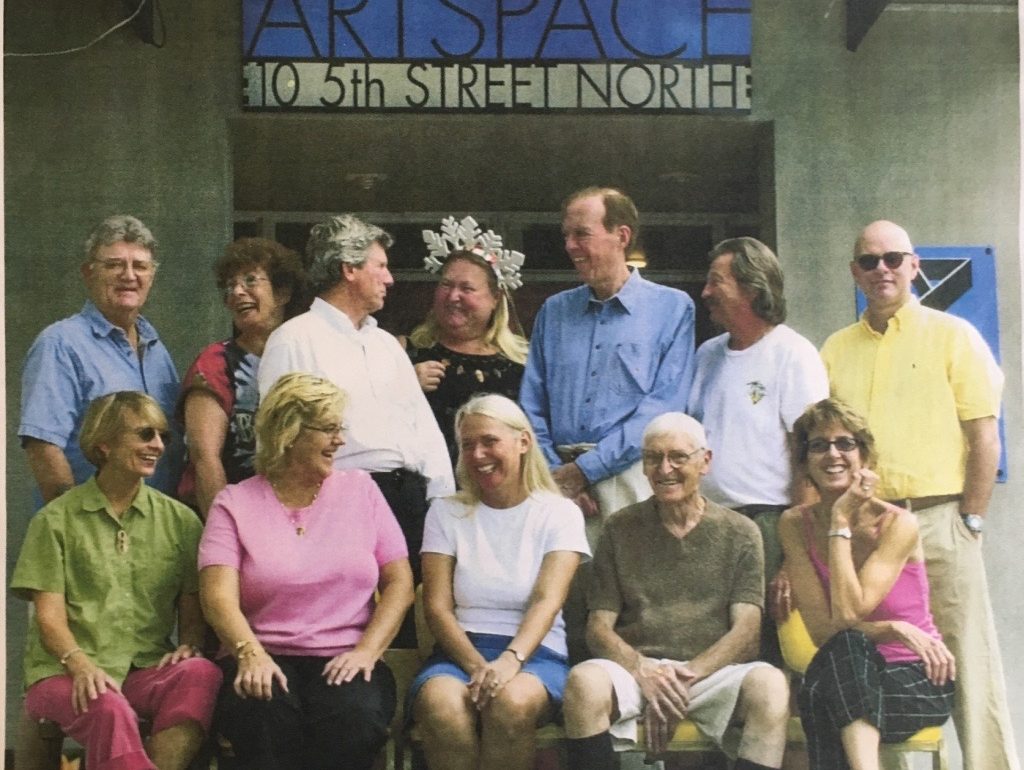 There’s a hidden gem on the second floor of a 1916 building that was once known as the Rutland’s department store: The ArtLofts of St. Petersburg. Established as ArtSpace in 1996, with a name change to ArtLofts in 2002, it is the longest, continually running artist studio space in St. Petersburg.

ArtLofts houses artist studios on the top floor of this building, which also holds the Florida CraftArt gallery and offices. This working artist enclave hosts a variety of mediums ranging from copper and wire sculpture to photography, watercolor and acrylic paintings, encaustic works, collage, and more.

The idea for the ArtLofts came from Mary Klein and her partner, Bill Killingsworth, who were part of an artist studio project undertaken by John Warren at the Studebaker building in 1986. When Florida Craftsmen (now known as Florida CraftArt) moved to 2nd Street South to open a studio and gallery around the same time, the pair formed a partnership to move their studios into an adjacent space.

“Downtown St. Pete in those days was not popular, but we had benevolent landlords who rented the space to us, and Florida Craftsmen, very reasonably,” says Klein. “We built that space out ourselves. We had 13 studios and it worked great.”

As downtown grew in popularity, there was a push to repurpose some of the buildings.  Rutland’s department store, located on the corner of 5th Street North and Central Avenue, had a 70-year run until it closed in January of 1990. Through a series of connections that brought building owner, George Rahdert, Florida Craftsmen, and Klein and Killingsworth together, new life was breathed into the structure. In 1996, Florida Craftsmen moved into the first floor, while the upstairs was built out by Klein and Killingsworth. They even made discoveries about the building that had long been lost over time.

“George’s contractor discovered the wonderful French doors that adorn several of the studios. They had been covered by sheets of concrete from a Rutland renovation. They cut through the concrete and preserved the doors, original hardware and all,” Klein says. “There were always interesting little spaces in that building. It was great for me while I was there, and I am so pleased that it has been able to stay there for so long. It was a good idea then, and a good place now.” ‘

Betsy Orb Lester, who was part of the original artist group to move to the spot, currently holds the title of the longest artist in residence at ArtLofts. She was encouraged to join when, after years as an Overseas National Airways flight attendant, Lester returned to college to study art. She wanted a space of her own to express the memories and knowledge from her travels. As she settled in, she was impressed with the energy of the group.

“‘Mother’ Mary Klein kept us in line and initiated projects like the yearly Deck the Halls Christmas artist-ornament sale to benefit Hospice,” says Lester. “Mary was especially kind when I was burning the midnight oil, painting my grad school thesis work.”

In the new building, the artists were fondly known as “Space Cadets,” a moniker assigned by Killingsworth, Lester notes. She was present for the renovations, where a treasure trove from the Rutland Department Store era was uncovered.

“We found pins under the carpet from alterations, a bucket full of dust, and storage closets full of yellowed price tag blanks and various accoutrements of the department store trade,” says Lester.​ “​The attic, now closed off in the building, had discarded department store invoices, ad copies and the like.”

The original floors now line the studio space, as does a vintage wood panel wall from the 1920s in the front studio, and walls section off the second floor into multiple studios. In the era before cell phones, the studio even had a house phone on the wall. Betsy remembers fondly the day that a call came in from her sister, “I was going to be an aunt!”

In the early 2000s, Klein and Killingsworth left the organization as leadership of the artist studios shifted to Florida Craftsmen. The studio space was reorganized and expanded. At present, there are 18 artists who call ArtLofts home, several with studio space spanning back 20 years.

Rebecca Skelton, a teaching artist at the Morean Arts Center and works with sketching, mixed media, and metal, came to the location in 1998. She had outgrown her home studio and wanted a safe place to create after she finished her day jobs as a freelance graphics artist and an arts teacher. The space was perfect for her to show her art and offer private lessons.

With the shift in leadership, she explains, “the biggest difference was that ArtSpace gave us a rent discount because we were the assistant manager – as in we did minor cleaning/repairs and were on call if something happened. We would close windows that had blown open or put people’s art or deliveries in their studios.” Now, the care for the building falls under the wings of Florida CraftArt, who has, in recent years, refurbished the kitchen area and added an upgraded security system to the building.

Skelton loves the openness of the art group. “We are a collection of artists, diverse in styles and media, located right above Florida CraftArt Gallery. Visitors can see twice the amount of wonderful art in the same building just by coming up the elevator in our 5th Street entrance, or the stairs off of Central.”

Christine Di Staola is the most recent member to join the studio group in late 2021. “At ArtLofts, I am fortunate to be surrounded by both space and light, not to mention a cadre of great art people to bounce ideas off of, exchange views with or get an impromptu critique,” she says. “In downtown, one can feel the full weight of the creative vibe and immense support for all the arts. I don’t think I’d be doing the quality of work I’m doing now had I not landed at ArtLofts and St Pete.”

People are welcome to come up for Second Saturday art walks as the studio space hosts rotating art shows in the front gallery. Often, the center is open Saturday afternoons. New works are available by each studio dweller monthly, and some spaces have special events with pop up shows, small art classes, or other similar events.

As a legacy location, says Lester, “Artlofts symbolizes time, past and present, for us artists and the city.” As such, it is well worth the visit!

ArtLofts is at 10 5th Street North, above the Florida CraftArt Gallery. Studios are open at various times but are consistently open for Second Saturday and Saturday afternoons, noon to 4 pm. For more, visit theartlofts.com or facebook.com/artlofts.