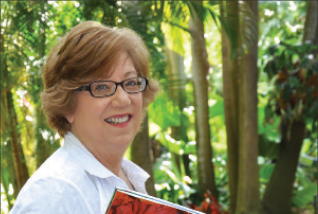 Sharing All of Those? Sunken Gardens Awaits You! 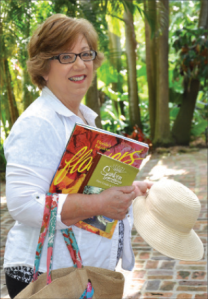 What to do when you retire? Ummm… go to the oldest roadside attraction in the United States and become a docent! Really? Yes, that’s what one Old Northeast resident did! And, not in an air-conditioned museum; no, this dedicated soul went straight to our beloved Sunken Gardens to volunteer.

Susan Rebillot, who has lived in St. Petersburg since she was 10 years old, has always loved gardening. It was in the family, after all. Her grandfather from Italy was a farmer and her grandmother from France grew roses and other flowers in New Hampshire. So, when Susan found her days open (when she was not tending her own garden), she signed up for the docent training class at Sunken Gardens and in five weeks became one of seven volunteer docents.

She led an impromptu tour in the last week of August as we gathered to take photos. Can you imagine? Yes, there were quite a few people who came out to tour the gardens in spite of the hot weather, and they loved having a person so enthusiastic and knowledgeable. Garden specialist Bill Ryland (the “boss” of all the volunteers) accompanied us on our tour and divulged more secrets and special tidbits. 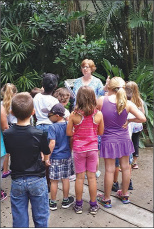 Susan especially loves leading the children’s groups, ages 5 years to adolescents. Why? She laughingly reveals, “Because kids have a lot of curiosity and are excited to be there!” If you haven’t been to Sunken Gardens, then you can’t imagine the possibility of a secret, shady, quiet (except for the occasional Kookaburras), lush, green, romantic, majestic, awe-inspiring tropical oasis right here on 4th Street. Even in August!

After her docent course in January, Susan led her first tour in February – she was that excited! Since then, she has lead one tour a week, sometimes two, and loves to tailor-make the tour to suit the tastes of the group. For instance, the children love to know how to propagate plants, the purpose of stems, leaves, and such.

Susan points out that the camellias have just been restored this year and were exceptionally beautiful in February and March. Didn’t know camellias could grow here? Well, some can with the right care! How about the multi-colored bark of the rare Rainbow Eucalyptus tree? It’s really rare and it’s really spectacular and it’s here in Sunken Gardens!

If you think you might be interested in being a part of the “in” group at the Gardens, then you have many choices. The docent classes are usually twice a year with at least eight people. The two-hour classes are once a week for five weeks, led by Bill Ryland. It is followed by a practice tour with Sunken Gardens horticulturalist and supervisor, Bill O’Grady, who knows the Latin names of everything. Oh, my!

Then, there are the weeding volunteers. Yes… people actually go to the gardens once a week to help with the weeding (under supervision, just in case). Those are probably people who live in condos – the rest of us are too busy weeding our own yards!

Or, you can volunteer in the gift shop, or fertilizing and watering the orchids once a week, or feeding and watering the exotic birds and cleaning their cages. The nice thing is it is all very flexible! As Bill Ryland says, “We appreciate the volunteers so much that we need to give them some freedom.” 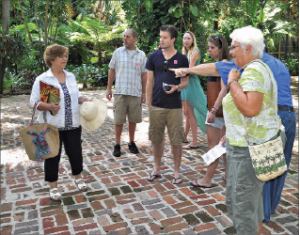 Of course, there is the Flamingos Forever Fund, too. Sunken Gardens Volunteer of the Year, Robin Reed, of the Old Northeast, has spearheaded the drive to replace the flamingo population (see story in NEJ July/August 2014). Only George and Lucy remain of the original large flock, and they are old and want a family! So far, the volunteers have raised $10,000!

Robin has also assisted in the grant application for a Sunken Gardens Master Plan from the National Park Service and in the past helped publish the book Views from the Vinoy as well as the Sunken Gardens Plant Guide.

In addition, Garden volunteers have also helped raise money and assisted at the Orchid Festival, the Green Thumb Festival, Marion’s Fundraisers, and the St. Pete Pride Festival. According to Bill Ryland, volunteers have worked over 350 hours from April to July, and have done 45 guided tours with more than 850 attendees!

There is also a need for speakers (off site), greeters (direct visitors/parking at weddings and parties), and helpers for special events on weekends. So, you don’t have to dig in the dirt or know all the Latin names of plants to help out. There is something for everyone who appreciates our special “Eden.”

You can sign up online at www.sunkengardens.org, or go to the Gardens (1825 4th St. N) in person. See you there!