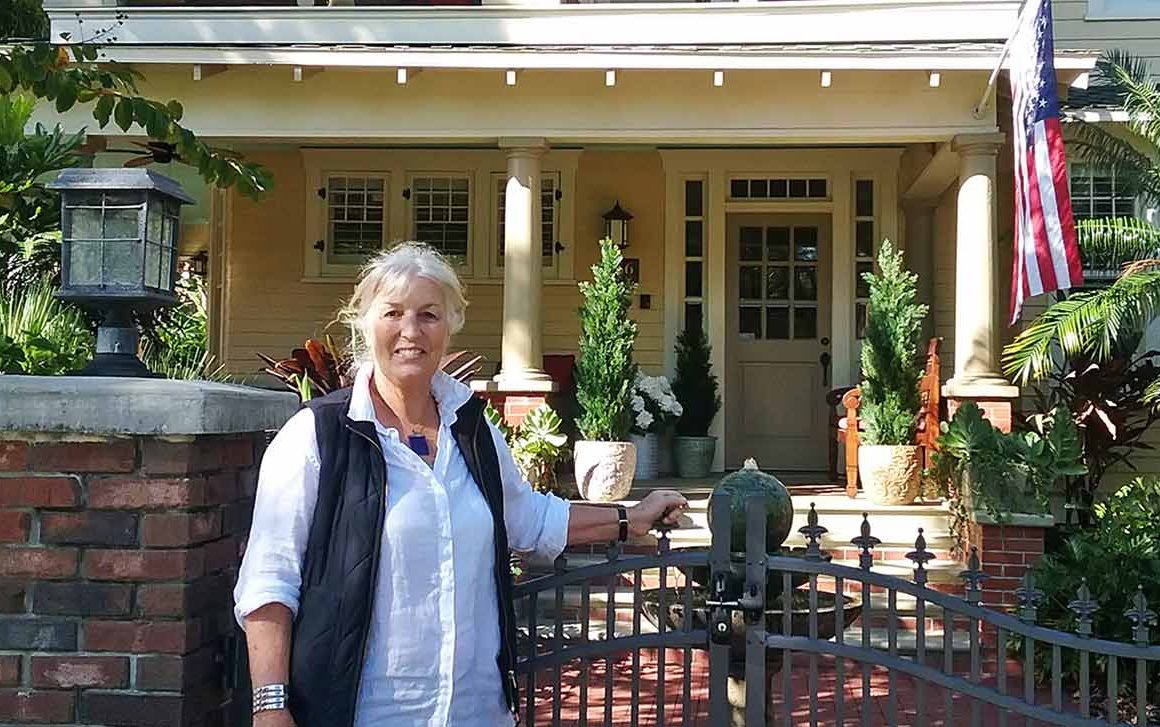 Looking back at our own personal history can help us reflect on where we’ve been in order to see how far we’ve come. Architectural preservation can do the same for a community, allowing us to look back and appreciate a different time in history. It gives us a visible connection to the past while we forge ahead to the future. Since the early ’90s, Old Northeast resident Maureen Stafford has made it her mission to save and restore well over 30 homes in St. Petersburg – an impressive achievement in helping preserve the city’s unique history.

A self-made architectural preservationist with an innate passion, relentless perseverance and an undeniable vision, Maureen has done a remarkable job making sure that run-down old treasures are transformed with new life.

Does she have a favorite project? “In their own way, each one has been a favorite,” says Maureen. It’s not just the homes, but the actual work that she values. “If you’re not in love with the work and inspired by the art of it, then you’re not doing it for the right reasons,” says Maureen. “I love to recreate yesterday and bring it into today.”

Last year her meticulous rehab of 756 Bay Street NE – an historic 1910 Craftsman-style home with carriage house – earned her the winning spot for HGTV’s Ultimate House Hunt 2020 in the Homes with a History category. She has also earned two local honors for the home – the title of 2008 Preservationist of the Year and Best Residential Rehab in 2012 – both presented by St. Pete’s historical preservation organization – Preserve the ’Burg.

The HGTV award-winning home took four years to renovate and might be the most challenging project she’s undertaken. “It’s my magnum opus,” she says. “It took a year just to do the carriage house, and then I had to move in there myself and finish up the main house.”

Maureen gives credit to the crew who remained on the job with her the whole time and helped her accomplish what most of us would think of as an overwhelming task. The house as it appears today is nothing like the house she first purchased. “It was in pretty bad shape,” she says. Among the many structural improvements she added: two additional fireplaces, a second-story porch, a revised roofline, and handmade windows for the carriage house – which did at one time have horse stables. In fact, the structure of one of the horse stalls is still there, says Maureen.

All of Maureen’s hard-earned accolades and success didn’t happen overnight. Born and raised in Wellington, New Zealand, she immigrated to the United States in 1968 when she was 18, got married and had three sons. After her divorce, she worked for a time selling stock photography for an agency in New York City, but it was when she was given the opportunity to restore a close friend’s home in New Jersey that she found her true calling.

Her friend’s home had been destroyed in a fire and Maureen recalls having her hands in every aspect of that first project, from electrical rewiring, plumbing, and drywall to painting, carpentry, and everything in between. Although the project was initially completely outside her comfort zone, she met the challenge by asking questions and reading books. Whatever she couldn’t figure out on her own, she had a subcontractor come out and teach her how to do rather than simply contracting the work out. “Because I had a burning desire to do things on my own, I unleashed what was inside – but you can’t get there by yourself,” says Stafford.

That home took about six months to complete. When it was done, she says she “felt like I accomplished something great, but as I usually do after a difficult challenge, I felt like my work wasn’t good enough. It’s a trait that keeps me humble and always learning.”

With a newly awakened desire to dive deeper into the world of real estate, Maureen went on to earn her real estate license and join a real estate brokerage firm in New York City. Her next restoration project came about a year-and-a-half later when another agent in the office encouraged her to purchase and renovate a fixer-upper that was in foreclosure. She jumped at the opportunity and as they say, the rest is history. She realized she had a gift for seeing the beauty in a home beyond what was visible to the naked eye. She was happiest when she could purchase a home that nobody wanted. Then she was free to put on her visionary glasses, roll up her sleeves, and bring a house back to life.

Maureen set out to purchase “run-down homes that nobody else wanted” in Patterson, NJ, building a portfolio of work that quickly gained the attention of private investors. “Trust, integrity, and understanding your obligations,” she says are the keys to success with long-term private investors. She has continued to work with her original investors for 35 years, and to this day can still turn to them for financial backing on projects that come her way.

In the early ’90s, Maureen relocated to St. Pete after discovering the city’s charm through a close friend who was a longtime resident. She was drawn to the coastal beauty and saw the potential for an expansion of her portfolio. Her first step was the transformation of several multi-family homes in Bartlett Park at a time when the neighborhood was rough and in serious disrepair. From 1993 to 2007, she served as board member of the Bartlett Park Neighborhood Association.

Other than Bartlett Park and a few homes in Historic Uptown, most of the homes she’s restored have been in the Historic Old Northeast, including the home she and her partner now live in on 9th Avenue NE. Her current project, at 1020 Bay Street NE, will be finished in the near future. She thinks this home  might be her ‘swan song’ as she recently turned 71 and ponders whether it may be time to turn over the torch to someone younger.

Construction, remodeling, and architectural preservation – especially during the years in which Maureen cut her teeth in the industry – was and continues to be a male-dominated field. But, she refused to let that be a barrier. Being a woman who showed genuine drive, interest, and tenacity she believes only strengthened her ability to find male colleagues in the industry who were gracious, generous, and willing to impart their knowledge and skill-set.

She attributes her success to surrounding herself with the right people, which currently includes a team of trusted licensed general contractors, engineers, and architects. She says her joy and satisfaction come from executing the design and overseeing all aspects of the project. She also has an eye for the little details that can make a difference in the final appearance. Her gift is a commitment to historical restoration “from foundation to finish.”

“Finding your bliss is the true key to success,” says Maureen. “Listen to yourself. What do you have fun doing? Become conscious of what it is you do either daily or what you do for fun that makes you smile. When time passes and you are so energized you could work all night doing it, that’s your bliss.”