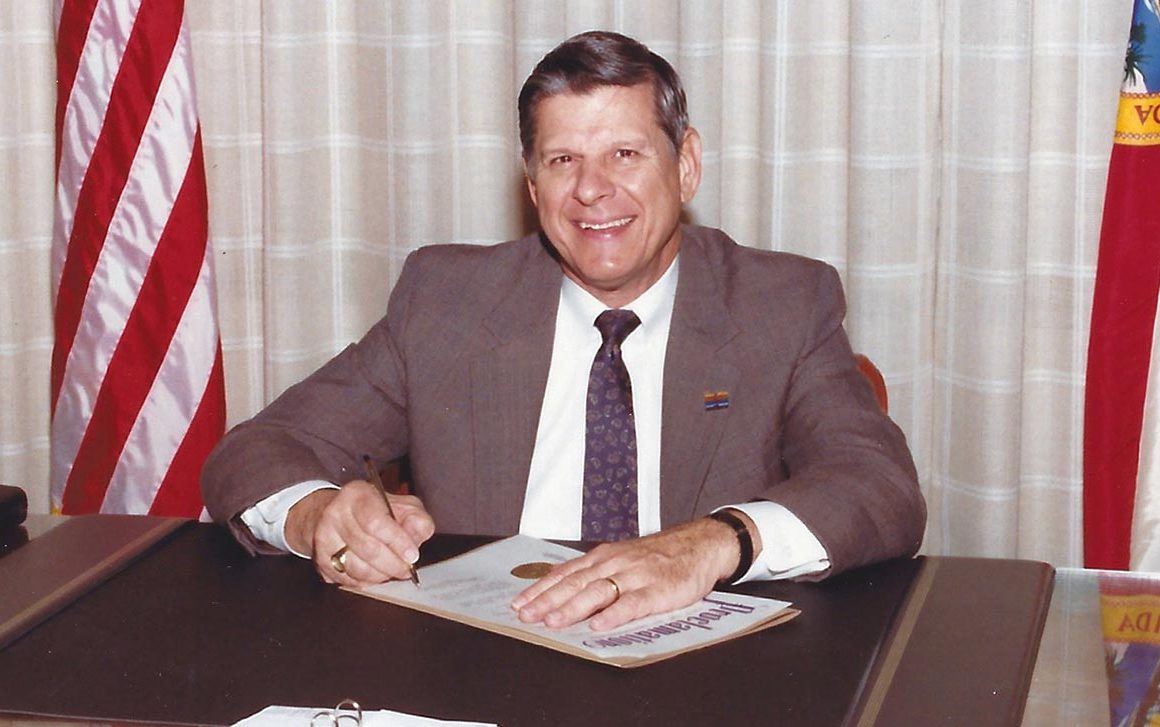 Robert (Bob) L. Ulrich served as mayor of St. Petersburg from 1987 to 1991. Ulrich, now 87, continues to be engaged in the city he loves. He is a zealous protector of the Downtown Waterfront Parks and an active member of the Waterfront Parks Foundation. One of his other passions is baseball. He closely follows the current negotiations over the future of the Rays. As mayor, he played a major role in bringing Major League Baseball to St. Petersburg.

At the time he became mayor, the city already had made the bold decision to build a stadium without obtaining any assurance of a baseball franchise to play in it. “Build It and They Will Come.” That action was taken in 1983 when the late Corrine Freeman was mayor. The decision to build without a team was highly controversial. Mayor Freeman herself called the decision “the riskiest gamble” St. Petersburg had ever taken. Consequently, Freeman and a city-council stadium supporter lost their bids for reelection. Mayor Freeman was replaced as mayor by Dr. Edward L. Cole, Jr. who opposed the stadium. Mayor Ulrich defeated Dr. Cole in his bid for reelection in 1987. He recalls, “There was a great deal of contention in the community about building the stadium. About 50 percent were opposed, and 50 percent were not opposed, to the idea of building a stadium without a baseball team.” Ulrich notes not only was the building of the stadium a risky gamble, but at the time, there was no record of any other city building a stadium without commitment from a Major League team to play in it.

Efforts to secure a team pre-dated Mayor Ulrich’s first term, but given the opposition of Ulrich’s predecessor, far from certain. There was a failed petition to recall Ulrich and seven council members over their continued support of stadium construction, and also a $23 million renovation of the Bayfront Center as well as an $11 million remodeling of the Pier. The earlier efforts to obtain a team were led by city leisure services director Rick Dodge under the supervision of city manager Bob Obering. “Rick Dodge was our point man,” Ulrich says. Still, Ulrich himself was involved in conversations with Frank Morsoni, Jerry Reinsdorf, and other baseball movers and shakers of the time. As Ulrich came into office, discussions were already underway between Dodge and the Chicago White Socks. The Sox were negotiating with Chicago for a publicly funded new stadium to replace Comisky Park. In 1986, they decided to develop an out-of-state alternative and their top choice was Florida. The Florida market was particularly attractive as there was no Major League Baseball franchise in the entire state.

In October 1987, Dodge and Mayor Ulrich visited the Windy City. Both claimed to be visiting Chicago on “other business” than baseball. But this did not fool the local press. A Chicago columnist shortly wrote a story entitled, “St. Petersburg White Sox? Shameful But Possible.” This was followed by an announcement from Baseball Commissioner Peter Ueberroth that he would not object to the Sox relocating to St. Petersburg. In April 1988, the White Sox went so far as to give St. Petersburg a $25,000 check to undertake a study of the feasibility of converting Al Lang Stadium into a temporary major-league ballpark in the event the new stadium would not be ready in time for the 1989 season. This was followed by a $30 million appropriation from the Florida Legislature to speed up construction of the stadium and add various enhancements; although the appropriation was technically earmarked for the first baseball team to come to Florida, wherever that might be, and also set to expire January 1st.

About this time, a media war broke-out between Tampa Bay and Chicago. “During the time that we were negotiating with the White Sox, the Chicago fans mounted a campaign to let us know what they thought about our stealing the White Sox out of Chicago, and they sent a considerable number of white dirty socks to St. Petersburg to emphasize their annoyance,” recalls Ulrich. St. Petersburg-based radio station WYNF started a petition drive to show support for bringing the White Sox to Tampa Bay. Newspapers in Chicago started a campaign to get Chicagoans to send their white socks, “one, or a pair, striped or plain, clean or dirty,” to St. Petersburg Mayor Ulrich. Ulrich humorously replied, “Just remember that I wear size 10.” The Chicago Tribune then collected the white socks in a bin and shipped them off for hand delivery to Ulrich. Upon their arrival in Ulrich’s city-hall office, he dispatched two firemen with gas masks, two assistants, and a truck from the hazardous-materials unit to remove them. The socks were later washed and distributed to the needy.

Meanwhile negotiations began to heat up in Chicago. The Illinois Governor got involved in the discussions to build a new stadium for the White Sox with public funding, but approval was required by the state legislature. A vote on providing $150 million for a new Chicago stadium was delayed until the last day of the Illinois legislative session. At five minutes to midnight, the vote stood at 54 to 61 against the stadium. “The legislature was in its final hours and was due to adjourn at midnight. At the 11th hour and 59th minute and 59th second, they moved to extend the session. In the next five minutes, they agreed to move forward to commit to a stadium.” Illinois Governor Thompson personally worked the floor, twisting arms until he reached the needed 60 votes for approval.

The flirtation with the White Sox was followed by unsuccessful efforts to secure the Texas Rangers, Seattle Mariners, and San Francisco Giants. Ultimately, St. Petersburg was awarded a new baseball team franchise in 1995 and the Tampa Bay Devil Rays were born. (The team’s name was later changed to the Tampa Bay Rays.)

The stadium, along with the restoration of the Vinoy Hotel, and the former International Museum, are credited by many with igniting the renaissance of downtown St. Petersburg.

Was St. Petersburg used as leverage so the White Sox could get their new Chicago stadium? As Mayor Ulrich said at the time, “when we went into these negotiations, they wanted to use us for leverage. The quid pro quo for that was the opportunity for us to raise our profile. It was well worth the effort…” Baseball historian Paul Pedersen wrote, “The affair put the Sunshine City back near the top of the race for an expansion franchise.”

What about baseball today in St. Petersburg? Ulrich observes, “It’s got to be a difficult time for the Rays. But the Rays need to better create an emotional infrastructure in Tampa Bay with the team. The owners themselves need a higher Pinellas County and St. Petersburg profile. It’s so huge. The better they identify with the community, the better they will get the support of the community. Kevin Cash has represented the team well, living in St. Petersburg. He is consummately talented in managing the team, a consistent personality in the community, highly regarded, and is a benchmark in developing emotional infrastructure in the community. But, despite the ownership’s shortcomings the Rays have produced a heck of a team!”

A former pilot in the US Air Force, Ulrich continues to practice law. He is married to Barbara Ann Woodworth and has four adult children.