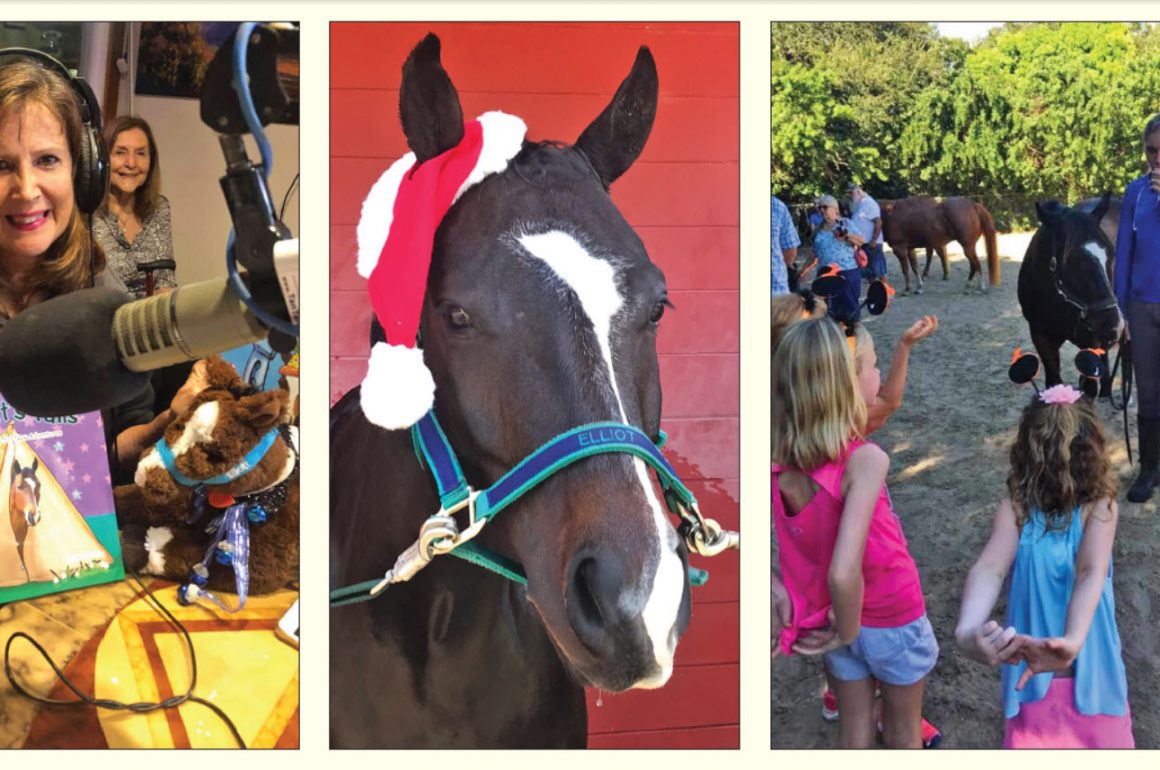 From the time Elliott was a foal, he has been over-flowing with personality, so much so that he never ceases to entertain. He creatively uses his nose and hooves to play with a beach ball, and enjoys galloping about with his dog friend, Sammie, a Doberman. When he is in the corral, he will kick over his water bucket just to run around with it on his head as a hat. These are the types of shenanigans he does in the real world that demonstrate his equine sense of humor.

Horse kisses are a unique experience, and Elliott’s smooches are the best. Pucker up and lean in for a surprisingly gentle, fuzzy, tickly, rubbery-feeling, and sometimes wet canoodle. Elliott’s breath is not bad considering all the healthy snacks he loves to eat, including apples, carrots, watermelon, and even peppermint. Getting groomed with a nice brushing also makes his day.

Elliott can attribute his celebrity to Sue Greenberg and Old Northeast resident Lisa Bohart. Sue is the pet parent of Elliott and the author of a series of books about him and his antics. Lisa, a professional artist, illustrated the books.

The first book, Elliott’s Tails: The Adventures of a Baby Horse came out in 2018 and the second volume, Elliott’s Tails: Saddle Up for New Adventures made it to print in 2019. A third book that was due out a year later has been on hold until the Covid outbreak subsides.

Both published Elliott’s Tails books have won the Mom’s Choice Awards for their educational benefits to children. But the books are an even bigger winner when it comes to being donated to sick kids at local hospitals like All Children’s and Tampa General. Not only are the two books a favorite due to Elliott’s escapades, but also because an 18″ plush toy in Elliott’s image is also given to the patients in the children’s wards.

Elliott’s Tails books are a clever combination of actual photos of Elliott incorporated in fictional illustrations with rhyming narratives of the imaginary tales. The stories in the first book depict Elliott learning how to do the typical things that toddlers and preschoolers get to know like teeth brushing, playing at the beach, napping, and eating healthy snacks. Then the stories in the second book include Elliott acquiring more knowledge that kindergarteners and early-elementary-school children would relate to such as helping mom cook, playing baseball, painting, and celebrating birthdays.

The creative mind behind the horse tales belongs to Sue. Born in Rochester, NY, Sue has lived in Tampa Bay since she was 12 years old. The eldest of five siblings, Sue grew up around horses because her father raised and raced quarter horses as a lifelong hobby. When her dad passed away eight years ago, Sue decided to continue his legacy by keeping the horse farm going in Seminole.

Coming from a big family it was natural that Sue loved working with children, so she began her career in nursing by studying for her Registered Nurse degree at St. Petersburg (Junior) College. She completed her studies and began employment at the University of Florida’s Shands Hospital in Gainesville, working with premature babies in the Neonatal Intensive Care Unit. Sue’s job as a pediatric nurse brought her to Tampa General Hospital where she worked in the NICU for 25 years, making her a healthcare hero long before it was fashionable.

Here is where her love for children and her love for horses intersected. Elliott was born in 2017 in Sue’s barn in Seminole and it was clearly love at first sight for both of them. Sue began writing about Elliott when he was a year old, and he seems to delight in regaling her with his antics to this day.

Lisa, a professional illustrator, and longtime friend of Sue’s approached Sue about collaborating on a children’s book. “Lisa is a horse enthusiast and she owns horses, too,” said Sue. It was a match made in heaven, and the rest – as they say – is history.

Sue was used to giving regular talks about Elliott at various schools, 4-H groups, Girl Scout troops, groups of home-schooled and foster children, but found that Covid-19 shut down most of those opportunities. Prospects of doing group visits at the stable – where Elliott lives with his mother, Ellie, and five other horse friends – also dried up while the epidemic was in full swing. In spite of the obstacles, Sue was able to make a recent visit to a Gingerbread School as well as conduct a Harley Davidson Fundraiser.

As a 4-H leader herself for eight years, Sue has enjoyed bringing 4-H children to the barn to meet Elliott in person. “Elliott is a special friend; kids can relate to Elliott,” said Sue.

In the past, Sue has held fundraisers to raise enough money to buy the books and plush toys she donates and distributes to sick children at the local hospitals. One of the things she missed during the height of the pandemic was getting to distribute all the sets of books and plush toys personally to each child. She could only drop off her donations in the lobby, missing the look of pleasure on the children’s faces.

But that is changing. Group venues are opening up again. Sue looks forward to reading to kids in schools and houses of worship. “All you have to do is ask,” said Sue. “Just send me an email.”

“When I see a child with an Elliott plush (toy) reading one of Elliott’s books, (I see) the difference (Elliott) is making, and I love it!” said Sue. “Elliott helps children learn and learn to love reading.”

“Moms tell me that Elliott does great appearances at Show and Tell, too.”

Elliott continues to be a star. He is a frequent guest with Dawn Reese from Hollywood Connection on the Tan Talk Radio Network (1340-AM and 106.1-FM) studio out of Clearwater. He has his own Facebook page, so his fans can keep up with his horsing around: http://www.facebook.com/elliottstail.

If you would like Sue Greenberg to read Elliott’s Tails at schools, community groups,churches or temples, are interested in sponsoring a fundraiser to support free booksand plush toys to hospitalized children, or would like to purchase Elliott’s Tails books or plush toys,email Sue at suegreenbrg@aol.com.