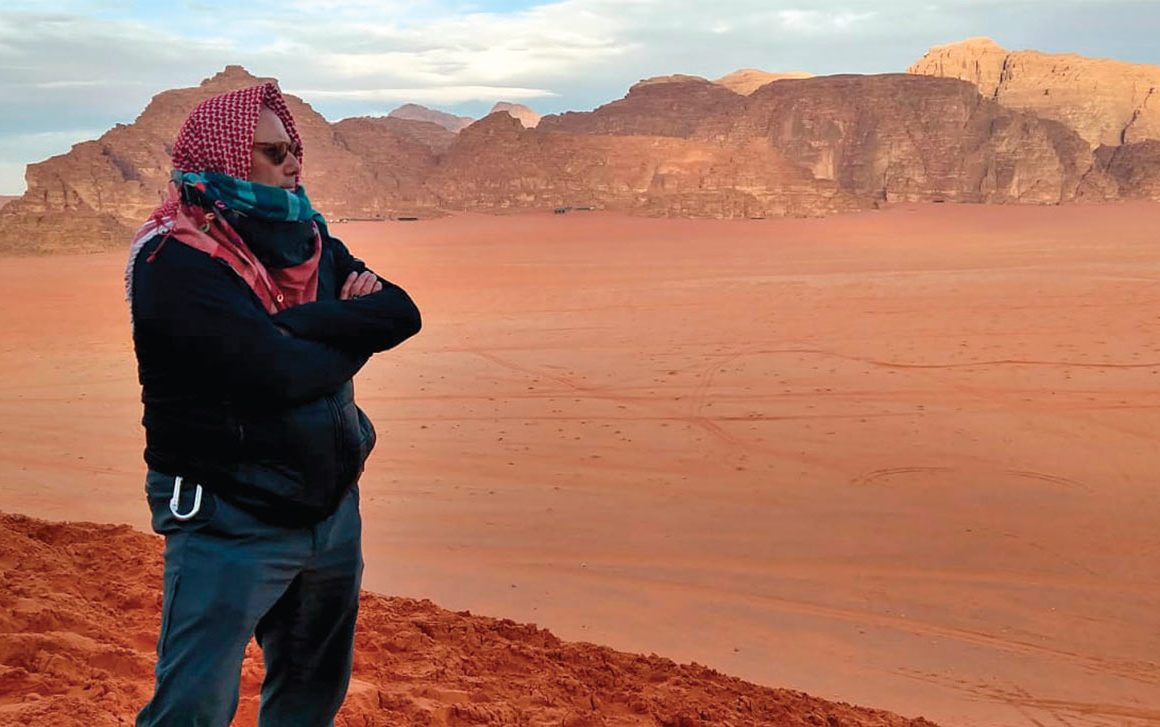 Though he’s an anthropologist rather than an archaeologist, Bryan T. Shuler is an adventurer, scholar, professor, musician, pilot, and all-around fascinating guy – much like Indiana Jones, except that Shuler is the real deal. Sometimes, when he is on one of his adventures, he even wears a hat that looks suspiciously like the iconic fedora.

Shuler’s life reads like an adventure novel, with wild tales from his globe-trotting escapades: getting charged by a bull elephant as a Fulbright Scholar in Ghana; being surrounded by whales as the onboard anthropologist for the National Geographic Explorer during a six-week expedition off the coast of Africa; hiking in the Yung Frau region in the Swiss Alps; he still recalls “the breathtaking view and thrill of crossing a glacier in a crevice.”

Whether it’s “walking in the ancient city of Petra in Amman, Jordan,” he says wistfully, or researching the West African Bagre myth with Sir Jack Goody, the renowned British anthropologist at St. John’s College, Cambridge University, Shuler’s life seems to take him from one thrilling experience to another. But he didn’t start out to be the next Indiana Jones.

Born in Pittsburgh, Shuler moved with his family to South Tampa when he was 11 years old – making him a semi-native, by Floridian standards. In 1999, he moved to St. Petersburg after finishing his graduate degree.

Academics propelled Shuler to a number of adventures, including as a researcher for the History Channel’s show, Museum Men. Roger Barganier, president and creative director of Creative Arts Unlimited, a St. Petersburg museum-display company based in Tampa, secured Shuler’s talents for the show in 2015, and featured him in a highly authenticated segment on Abraham Lincoln’s funeral entourage. He performed the extensive research necessary for the show to rebuild Lincoln’s funeral carriage down to exact specifications.

But what about the music? It all began there. Shuler composed music in a traditional way, but then branched out, exploring ethnomusicology and science. He made an electronic composition based on genetic information of the HIV virus DNA and the T-4 lymphocyte RNA. Shuler’s “Song of the Helix” is considered the first musical interpretation of genome-based material. That landed him an interview on NPR and a “Rapture” Tour with reconstruction surgeon and photographer David Teplica.

As an accompanist and composer, Shuler has performed for ballet and modern dance companies worldwide. In addition to the Tokyo Star Dancer Ballet Company, Shuler’s credits include Tampa Ballet, Broadway Theatre Project, Tallahassee Ballet, Circus Nexus, and Bay Ballet Theatre among others. When he was composer in residence at the National Dance Company of Ghana, he wrote and performed “Hands of Steel, Souls of Stone” for an international audience at the gala opening of the new National Theatre of Ghana.

Schuler’s thirst for learning seemingly knows no bounds. While he studied more pedestrian European languages like French and German in high school and college, he catapulted into less familiar vernaculars like Twi, which he learned while in Ghana, Portuguese in Brazil, Japanese while working at the Tokyo Star Dancer Ballet Company, and Arabic on an ACOR Sustainability Fellowship in Amman, Jordan. Perhaps Shuler’s most impressive assimilation of written communication is his fluency in Mayan hieroglyphics.

Not content to be simply a brilliant mind on the ground, Shuler’s exploits also take to the skies. “As a pilot and vintage aviation supporter, I attend the Oshkosh Airshow, the world’s largest, every year,” said Shuler. Most recently in 2021 Shuler put on his flight suit and piloted the “Berlin Express,” a World War II B-25 Bomber at the Oshkosh Airshow, where attendees “can support the care of older aircraft by paying for a ride in them.”

Shuler has been married to his wife, Kerryanne, for 15 years, and together they have a blended family of four children. They live near Downtown, but Shuler spends a good deal of his free time lunching, reading, or “holding court” at Fourth Street Shrimp Store, as well as rifling through the antiquarian stacks at Wilson’s Book World. Kerryanne is a dual citizen of Ireland and the U.S., and she works as a project manager for a telemedicine company. They met at the party of a mutual friend where Shuler was playing the piano, and the rest, as they say, is history. History even played a part in their wedding as they were married at Roseland Chapel outside of Edinburgh, Scotland.

The only continents Shuler has yet to explore are Australia and Antarctica, but it’s hard to imagine those won’t be checked off his bucket list before long.

“In life,” said Shuler, “one thing leads to another, and you need to go with that to find where you should be.”