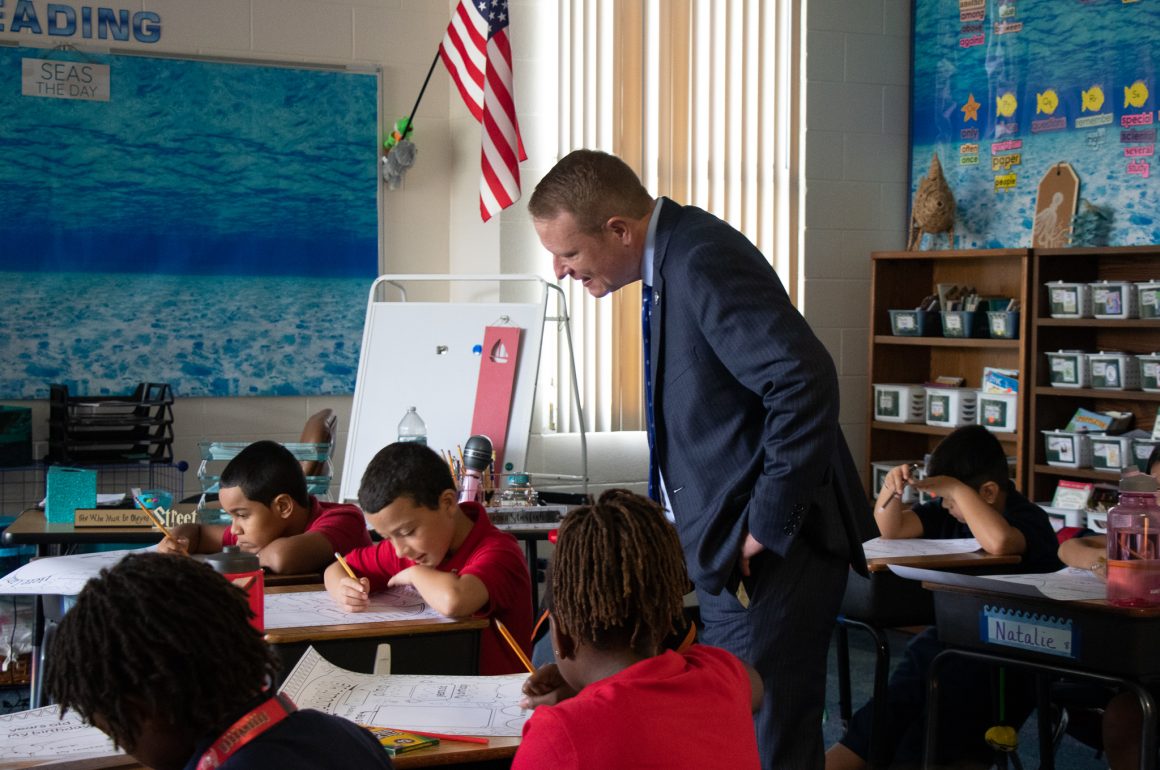 When former Superintendent Michael Grego retired after ten years on the job, the Pinellas County School District didn’t have to look far for his replacement. New Superintendent Kevin Hendrick has been a fixture in the school district for 25 years. Hendrick is a local. He grew up in Belleair and Largo, graduated from Largo High School, and went to USF. He began his career teaching math at Pinellas Park High School before spending six years at Dunedin High School teaching social studies and coaching basketball.

Hendrick moved to the Old Northeast 11 years ago to shorten his commute when he took a position as assistant principal at Palmetto High School in Manatee County. It wasn’t long before he was working in Pinellas County again when he became Principal at Northeast High School in 2008. He developed a solid record of success and held a wide variety of leadership positions in academics and athletics.

Hendrick’s experience made him a key administrator for much of his predecessor’s tenure. If there was a moment that he knew he could be the district’s next leader, he says it was when COVID created a challenge unlike anything schools had ever faced.

As chief academic officer during the pandemic, Hendrick spoke of long days and nights in March of 2020, working virtually with his team to set up something that teachers and students of all types could use to resume teaching. “Nothing was perfect, but comparatively speaking, we put together a system that allowed teachers and students to continue their work.”

During the hiring process, Hendrick emerged as a frontrunner because of his familiarity with the district’s teachers and the confidence they have in him. “Teachers are the most important piece, obviously,” he said. “You can have great buildings, on-time buses, but if your teachers are terrible, no one cares about the other things. Great teachers are the key.”

Making a home with his wife Melissa, also a teacher, and their son Jackson on 22nd Avenue and Bay, Hendrick is well acquainted with the schools in the Northeast area. He has been a familiar face making visits to North Shore Elementary and Shore Acres Elementary. “Our emphasis is on neighborhood schools after many years in the 1990s and 2000s focusing on the choice programs,” he said, referring to the lottery system for fundamental and magnet schools not zoned for a specific neighborhood. The system created a high demand for certain programs.

Hendrick wants families to know that the district’s high quality isn’t limited to its well-known specialty programs, but also extends to the neighborhood schools. “We have a $1.8 billion budget. We’re always going to have more ways to challenge kids in neighborhood school versus other options.”

A big focus for Hendrick is on the middle school experience. And having a son attending Thurgood Marshall Fundamental Middle School has given him an up-close look from the perspective as a parent. “Our middle schools have always been set up like mini high schools. We’ll be making some changes so that the transition is more gradual, so sixth grade will look more like 5th grade, and 8th grade looks more like high school.”

Much of Northeast St. Pete is zoned for John Hopkins Middle School, which is also home to an arts magnet program. “We’ve made significant improvements at John Hopkins. We’ve added a new gifted program, and nobody will ever have a better arts program.”

Hendrick also talked about how the new middle school under construction on 62nd Avenue east of 1st Street will impact families in Northeast St. Pete. The facility is a partnership with the YMCA. “It’ll be a choice school, with a proximity preference.” The school will open in August of 2024.

Hendrick didn’t enjoy a long “honeymoon” phase in his new position. Less than two months into his first full school year, he saw to the opening of 22 shelters in Pinellas schools, staffed by 700 employees, during Hurricane Ian.

When it comes to hot button issues that dominate the statewide and national conversations about education, Hendrick is focused. “I stick to what we are actually doing. I taught high school civics and took pride in the face that my students didn’t know my politics. The noise is just noise.”

Hendrick is forward looking when discussing the district’s challenges and keeping teachers in the profession. “A big challenge is the shift in the workforce,” he said. “You don’t have to live on Wall Street to work on Wall Street. The teaching profession has become politicized, and we have to elevate teaching as a profession.”

With 25 years under his belt right here in Pinellas County, Hendrick exudes a stability that is refreshing in a high-profile leadership position. “Dr. Grego was great mentor. I’ve always enjoyed every position I’ve had so I was never about the next job.”

That’s good for our schools and our neighborhood, because Superintendent Hendrick has a long view of what our schools can accomplish. And even though he has his plate is full as an administrator, he has a youthful side. Whether he’s coaching baseball, watching his son’s middle school golf match, or jumping into a game of Wiffle ball in the alley, Superintendent Hendrick shows he’s in it for the kids.

« Previous post
Safer Sun: One Company’s Mission to Protect Skin
Next post »
Why ‘The Colored Museum’ is Important